The University of West Georgia’s Richards College of Business held its 24th annual Economic Forecast Breakfast Tuesday, with business, government and community leaders from the west Georgia region gathering virtually to hear from three distinguished speakers on what to expect as the economic recovery from the COVID-19 pandemic continues. 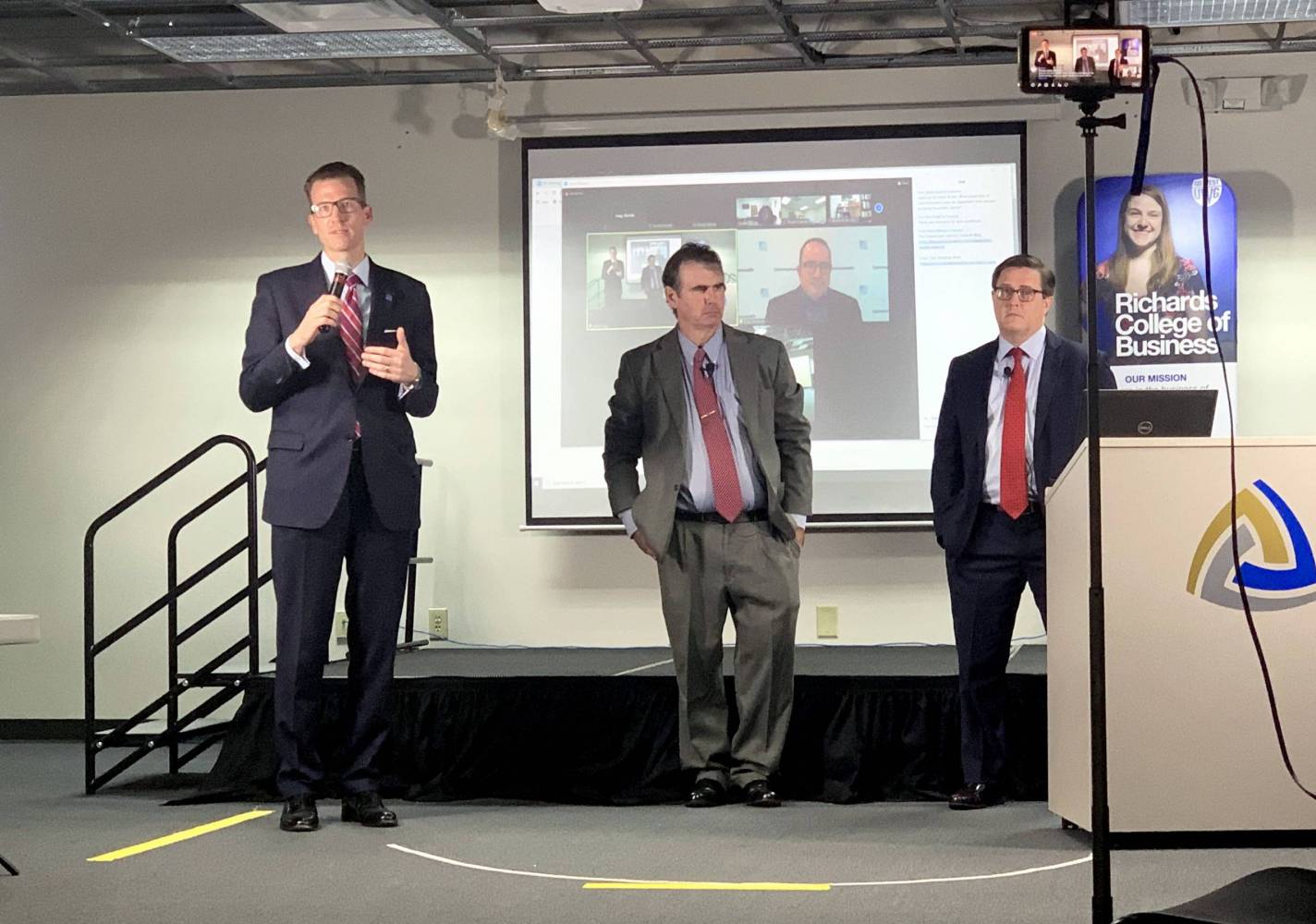 The University of West Georgia’s Richards College of Business held its 24th annual Economic Forecast Breakfast Tuesday, with business, government and community leaders from the west Georgia region gathering virtually to hear from three distinguished speakers on what to expect as the economic recovery from the COVID-19 pandemic continues.

Hosted by the Carroll County Chamber of Commerce and the Richards College of Business’ Center for Business and Economic Research (CBER), the event was held at the Burson Center in Carrollton and was broadcast via Zoom and Facebook Live.

“When I came to the University of West Georgia in the spring, this particular event was one of the things people spoke about most often,” Kelly said. “It creates value for the community, for industry and for local governments, and I couldn’t be more thrilled to be a part of it. It provides the types of insights that all of us are looking for right now.”

Dr. Faye McIntyre, dean of the Richards College of Business and Sewell Chair of Private Enterprise, said this is a time for us all to come together.

“This is going to be an economic forecast breakfast like no other, just like 2020 has been like no other,” McIntyre said. “You are going to hear some wonderful information this morning. We at the Richards College of Business are in the business of transforming lives through education, engagement and experiences. Today we hope you are going to hear something that will help to make your organization more successful in the next year.”

Smith assured the virtual crowd that his team and others in the field are working hard to stay on top of the fluid economic situation affecting the nation and specifically the west Georgia region, which includes Carroll, Coweta, Douglas, Haralson, Paulding and Polk counties.

“Although these are unprecedented times, we are still continuing our work and mission,” Smith said. “COVID has had resounding impacts on the economy as a whole, and it’s a topic we’re having to deal with on a daily basis.”

“Unemployment rates reached the double digits, but they’ve fallen back down,” Smith said. “We started out five years ago with a 5.1 percent unemployment rate, and right now we’re sitting at around 5.8 percent for our region. We’re not doing terribly, but obviously we’re not doing as well as we were.”

Smith reported that some businesses actually benefited from the pandemic, especially those who adjusted and provided online services, curbside pickup and deliveries. Smith also said the construction industry “is still moving swiftly and is robust, and the housing market is still on an upward trajectory with the lowest mortgage rates in history.”

Mark Butler, Georgia’s 9th labor commissioner, said his team has never had to work harder with less resources, but that he is proud of what they have accomplished.

“We’ve seen just under four million claims filed this year – most of them during the pandemic – and we have to work all of them,” he said. “We’ve had four times the work than during the Great Recession, but we are only seven days backlogged. The men and women of the Department of Labor are heroes; they’ve worked around the clock, seven days per week.”

Following Butler’s presentation, McMillen discussed the current state of the national economy. “Bounceback” has been better than anyone thought it would be, McMillen said, but economic and medical risks are rising. This factor, according to McMillen, will likely worsen the impact to the economy but not halt overall resilience.

“As we get the third wave, we’re going to see states that have reopened slow down,” he said. “It will affect the economy at a national level; it’s an incredible human tragedy. Hiring has increased from early on in the pandemic, but it’s slowing down. We’re not out of the woods as far as economic recovery.”

However, McMillen said the economy will recover over time and there are currently several positive factors to consider.

“We are absorbing the hits,” he said. “What we have is a situation where the economy keeps growing and the market keeps rising despite what’s going on. We can get through it, and we will get through it, but there will certainly be more turbulence ahead.”