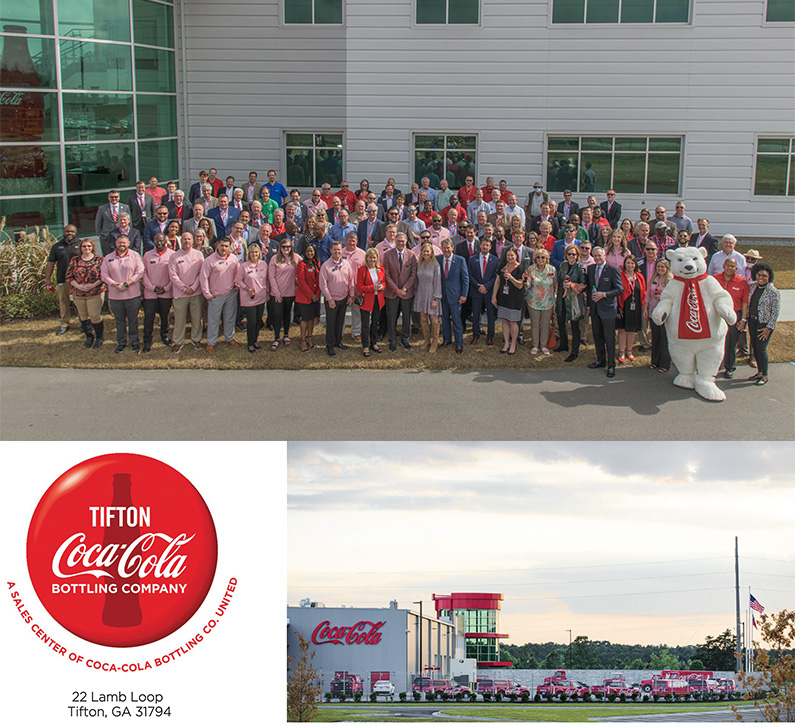 The 343,000-square-foot facility, which also includes a warehouse, fleet shop, administrative offices, and meeting space, is home to the latest technology and state-of-the-art equipment used in the beverage industry – a benefit to both associates and customers.

“Our investment in our associates is paramount, but so is our investment in the communities we serve every day. In the past five years, we have invested more than $200 million in the state of Georgia,” said John Sherman, Coca-Cola UNITED President and CEO. “In 2019, we announced our plans to invest in the Tifton community and this investment also represents our continued commitment to the state of Georgia. This facility reflects how we conduct our business, staying focused on what is most important – our associates, our customers and our communities.”

Tifton Sales Center Manager Charlie Yawn added, “This grand opening has been a long time coming, as many of us have been involved with this project for the last several years. We are so excited to see it come to life.”

Approximately 275 employees work at the facility, which has a payroll of approximately $13 million.

“This facility is one of the most technologically advanced distribution facilities in the North American beverage industry,” said Crawford Jones, Coca-Cola UNITED East Region Vice President. “It is a great testament to our partnerships in Tifton and across the state of Georgia, and the thousands of associates who serve our customers and communities.”

After remarks by Coca-Cola UNITED executives and government officials, the official ribbon cutting took place outside the new facility in front of a crowd of some 100 guests. Facility tours and lunch followed, and COVID-19 protocols were adhered to onsite.

B-roll and photos from the grand opening and b-roll of Tifton Vertique in action can be found here.

The Tifton Sales Center sets a new standard in technology for a beverage sales and distribution center using the Vertique case picking warehouse system, manufactured by System Logistics. Vertique transforms the case picking process into an organized, more ergonomic, and efficient sequential operation, and puts less physical stress on associates. The design of the facility also accounts for harmony in people movement, truck logistics and product flow. A new palletizer system provides a more efficient flow of operation and people and minimizes the number of touches to the product before reaching customer shelves.

Construction on the Tifton Sales Center began in early 2020 and was complete by mid-year 2021. The project used sustainable design and resources and incorporated environmentally friendly materials throughout the facility. Additional features include LED lighting, solar reflective glass, and an HVAC energy management system. 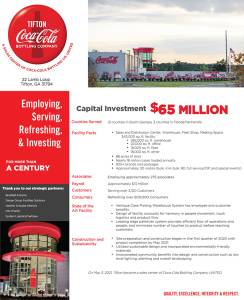 Coca-Cola UNITED’S Commitment to the State of Georgia 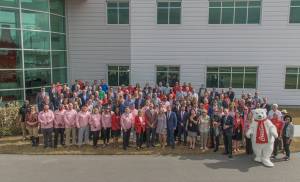 Coca-Cola Bottling Company United, Inc., founded in 1902 and headquartered in Birmingham, Alabama, is the second largest privately held Coca-Cola bottler in North America and the third largest bottler of Coca-Cola products in the U.S. Now with its fifth generation of family working in the business, Coca-Cola UNITED has approximately 10,000 associates located in more than 50 facilities across six southeastern states (Alabama, Florida, Georgia, Louisiana, Mississippi, and Tennessee). Historically significant franchises within our Coca-Cola UNITED family include Chattanooga, the world’s first Coca-Cola bottler; Atlanta, home of the worldwide Coca-Cola System; and Columbus, Georgia, development site of the original Coca-Cola formula.

For 120 years, Coca-Cola UNITED has remained true to its foundational core values of Quality, Excellence, Integrity and Respect. Local relationships, personalized customer service and strong community engagement have been the foundation of our business for more than a century. Each year, millions of dollars are invested in our local communities, supporting education, community development, sustainability and nonprofit organizations that empower and impact those in need. For more information, visit cocacolaunited.com.