The company also cited it expects the project will remain within the current cost forecast. 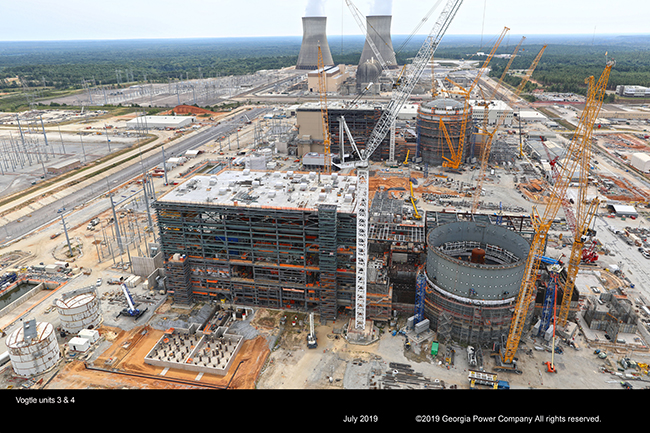 The target in-service dates for Georgia Power’s Vogtle 3 & 4 nuclear expansion project near Waynesboro, Ga., remain unchanged at November 2021 for Unit 3 and November 2022 for Unit 4, the company announced last week in its project update filed with the Georgia Public Service Commission (PSC). The company also cited it expects the project will remain within the current cost forecast.

Georgia Power filed its combined 20th and 21st Vogtle Construction Monitoring (VCM) Report for the period July 1, 2018 through June 30, 2019, with the PSC. A link to the filing can be found here.

Significant progress continues to be made at the construction site, with the project now approximately 79% complete.

The project met all major milestones in 2018 and met all first and second quarter major milestones for 2019. Recently, the site completed a major step in the Integrated Flush process by successfully testing a portion of the Spent Fuel Pool Cooling System (SFS), a key safety component for Vogtle Unit 3. In addition, the company ordered the first nuclear fuel load for the unit, the first nuclear fuel order to be placed in more than 30 years for a newly-designed reactor in the U.S., marking a major milestone in the project’s transition to operations.

The project workforce remains at an all-time high with approximately 8,000 workers on site. With more than 800 permanent jobs available once the units begin operating, Vogtle 3 & 4 is currently the largest jobs-producing construction project in the state of Georgia.

VCM process
The company files a VCM report to provide the PSC a detailed update on progress and other information related to the construction of the nation’s only new nuclear units. The VCM process includes public hearings held at the PSC, as well as reports filed by the PSC staff’s independent construction monitor.

New construction time-lapse video highlights progress since groundbreaking
Georgia Power has released a new video of the nation’s only new nuclear units currently under construction.  From the removal of four million cubic yards of soil, to historic module and concrete placements, the video includes milestones throughout the project’s history. Once completed, units 3 & 4 will generate enough electricity to power approximately 500,000 homes and businesses.

Deprecated: Function related_posts is deprecated since version 5.12.0! Use yarpp_related instead. in /var/app/current/src/wordpress/wp-includes/functions.php on line 5379
Report: Mexico, China are Top Destinations for US Poultry Exports
Corporations Line Up to Donate to Victims of Hurricane Dorian
Posting....