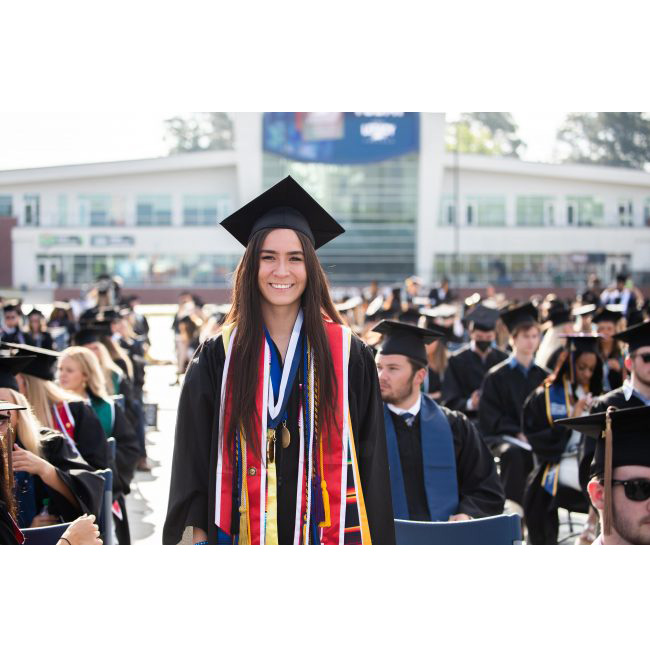 Born into a family of immigrant farm workers who settled down in Claxton, Georgia, Jasmine Guerra knew her options for a college education were limited. She also knew she’d face additional obstacles as a first-generation college student and first-generation U.S. citizen, but her desire to create a legacy for her family burned brightly.

“My entire life up to this point has been truly unprecedented,” Guerra said. “University was never something that was guaranteed for me. Due to socioeconomic factors, I more so had to come to Georgia Southern. It was my only option to afford an education because I would be first year exempt from living in a dorm.”

She spent her freshman year as a commuter student, during which she worked as a restaurant server to save money so she could live on campus her sophomore year.

“I got my first job at El Jalapeno, and I saved every dime I could until I could afford to move out,” she said. “My parents weren’t too happy, and they didn’t talk to me for almost a week because girls don’t move out of their house until they’re married in a Mexican household.”

With her parents’ approval and a drive to break barriers, Guerra dove into the Georgia Southern way of life. But her transition wasn’t always easy.

“As both a first-generation college student and a first-generation U.S. citizen, there have been so many additional challenges and barriers that I’ve had to face than the traditional student you would find here at Georgia southern,” she said. “I am so grateful that none of those were enough to stop me from fitting in on this campus, and that’s what makes us so special. Georgia Southern celebrates what makes us different.”

As she adapted to campus life in Statesboro, she joined numerous organizations including Southern Leaders, Association of Latin American Students, Pi Sigma Epsilon, several honor societies, Alpha Omicron Pi sorority and the Finance Association, among others.

“I did things because I wanted to enjoy them, and I chose things that would create or add value to my student experience,” she said. “I can say that I’ve had the opportunity to do so much, see so much and meet so many people. They say that your college years are the best years of your life, and all I can say is that these past five years at Georgia Southern are going to be hard to beat.”

One of Guerra’s most memorable moments as a student was being crowned the 2020 Homecoming Queen, the first Latina student to ever win the title.

“When my name was said, all I wanted was a hug from my parents because this moment was for them,” she said. “This moment was to show them that their sacrifices were worth it, they are worth it and they will continue to be worth it. My parents were incredibly proud that I won. They thought that there was no way that I would be able to win over the other women from more affluent families on the court. They were so scared that I would be heartbroken knowing that it was something I deserved but wouldn’t receive because life hasn’t always been fair to people like us. I want to serve as an example for anyone who struggles with self-doubts that anything is possible.”

Being a part of this University tradition, and many others, is what made Guerra fall in love with Georgia Southern.

“I had to make myself fall in love with Georgia Southern my freshman year because going to school so close to home wasn’t ideal,” she said. “Our spirit and traditions were a selling point for me, and I fell in love. It is such an honor to be our homecoming queen because it represents our spirit and traditions. The amount of love I received from students I have never met was truly special, and I will always carry it with me. I am so incredibly proud to represent such an incredible and diverse student body that makes this school so special and unique from others.”

Guerra found her academic home in the Parker College of Business where she participated in the Eagles on Wall Street program, in which students travel New York to visit well-known organizations and firms of the U.S. and global financial systems. She also became a Parker Business Scholar, an experience that has expanded her network and her confidence.

“Going into this program my self-confidence was weak, and it was something that I wanted to grow in throughout the course of it,” she said. “The networking in the program is surreal. It’s insane to think that you have such big cheerleaders on your side who are 100% your advocates for success. I don’t think that I would have been able to overcome my imposter syndrome if it weren’t for these individuals. Support can go a long way and in my case, it has transformed me into a confident woman who knows the value of her work and who will not minimize herself to fit in anyone’s mold. I am more confident than ever that I am capable of making it in the professional world.”

Following graduation, Guerra plans to move to Atlanta, Georgia, to work for the world’s biggest wealth management bank, UBS, as a client service associate. Her career goals include becoming a top portfolio manager who constructs portfolios consisting of companies who do good by their employees, the communities they serve and the environment in which they operate.

“It is crazy that a girl who comes from nothing will be working with high net worth individuals who have generational wealth,” she said. “I can’t believe it sometimes. My goals and passions are fueled by this sense of purpose to make money beautiful for everyone, but the majority of the world lives in lower levels of income. I want to spread financial literacy to those who have been historically underserved so that they can begin to build their own generational wealth like I am trying to do for my family.”