The Claxton City Council may have violated the Georgia Open Meetings Act during the first meeting of 2020.

The issue stems from a vote for the Mayor Pro Tem on Claxton’s City Council which was conducted by secret ballot. 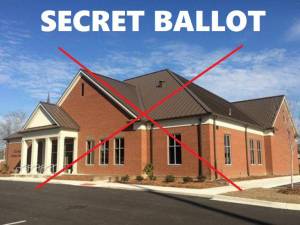 The Claxton City Council may have violated the Georgia Open Meetings Act during the first meeting of 2020.

The issue stems from a vote for the Mayor Pro Tem on Claxton’s City Council which was conducted by secret ballot.

At the direction of the mayor and in the presence of city attorney Bill Callaway, City Clerk Diane Parker distributed ballots to members of council Monday evening before collecting the ballots again and announcing that Councilman Larry Anderson defeated Councilwoman Lisa Perry 5-1. Parker announced the vote totals but not the individual votes by council members.

In February 2012, the Georgia Supreme Court ruled that “state public bodies must record in public meeting minutes the names of those members who voted against or abstained from voting on a measure, even where the vote is not taken by a roll call,” according to the Reporters Committee for Freedom of the Press. The case specifically dissected whether or not individual votes must be announced and recorded, a notion the court affirmed in favor of recording.

From the RCFP, “The Supreme Court ruled that – in light of the legislative intent of the open meetings law to increase government transparency – “it should be interpreted to require public bodies to list the names of those who vote against a proposal or abstain from voting, except where the vote is unanimous.”

To rule otherwise “would potentially deny non-attending members of the public access to information available to those who attended a meeting,” said the court. “Such a result conflicts with the Act’s goal of greater governmental transparency.”

The Attorney General at the time, Sam Olens, filed friend-of-the-court brief in support of additional transparency and praised the Ga Supreme Court ruling saying, “this ruling sets a strong precedent that government should err on the side of openness.”

Last summer, the local newspaper filed a complaint with the Georgia Attorney General’s Office over a secret ballot taken by the Evans County Economic Development Authority. Branch, Anderson, and Callaway were all present for the secret ballot vote on the EDA and the subsequent re-vote.

The video of the meeting is below: