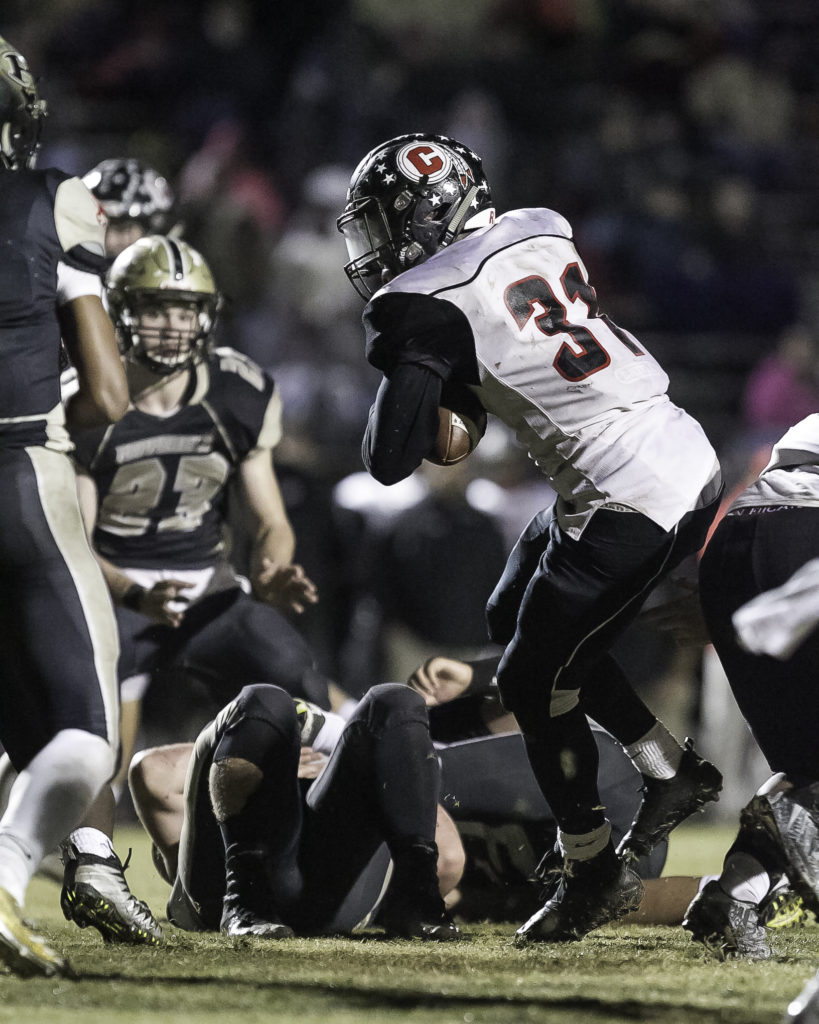 The Friday night match-up between the Pepperell Dragons and Chattooga Indians was a crucial Region 7-AA game for both squads.

This contest would decide the #2 finisher in the region and provide the opportunity to host the opening round GHSA playoff game.

While Chattooga’s Coach Charles Hammon has led the Indians to the playoffs for the last five consecutive seasons, those games were on the road. This year will be different for the tribe.

The Indians came away with a well-earned 19-7 victory on Lynn Hunnicutt Field. For the first time since the legendary Coach donned the red and black as a key element on the Chattooga staff, the Indians knock off the Dragons and break, what many referred to as, the Hunnicutt Curse. The Indians claimed the No. 2 spot in Region 7-AA and will be hosting the Washington Bulldogs on Friday November 9th in the first home playoff game for Chattooga since 2000.

There is no love lost between Chattooga and Pepperell and both teams played very fast and physical.

Both defenses opened up the game with something to prove but, it was the offensive line of the Indians that controlled the line of scrimmage and opened running lanes for E.J. Lackey, Devin Price and LaShaun Lester.

But the running game was at risk early in the first half when senior Center, Devon Blackmon, the anchor of the Chattooga O-line, went down with an injury. The snapping duties fell to sophomore Eli Hosmer along with the task of maintaining the cohesive unit of blockers that has made Chattooga’s run game the lethal threat that it is. Hosmer was up to the task and the Indians rolled up their 6th performance of 300+ yards rushing with a 382-yard night on the ground.

Despite showing some ability to move the football on the ground, Chattooga allowed mistakes, with turnovers and dropped passes, to keep them out of the end zone. At the end of the first half, neither team had managed to score and this played well for Coach Hammon’s game plan of 4-quarter football. “I told the boys to win or tie each quarter. When that quarter is over, it’s a new game,” said Hammon.

The Indians’ first half defensive performance was an impressive indicator that the banged-up Dragon offense would struggle all night to simply move the ball.

“I think it was one of the best, if not the best, efforts we have had on defense since our staff has been together,” said Defensive Coordinator Bob Smith. “We were extremely physical and very fast. I thought our kids played with a purpose and executed our plan well. I could not be prouder of them.”

The Chattooga defense, led by #17 Jakoby Cottrell, rolled up 58 total tackles. Cottrell had 11 tackles and two sacks on the night, while senior linebacker Malachi Mack had nine tackles and a sack. Senior Jackson Lowenberg and sophomore Ty Veatch were also major factors for the defense while junior defensive tackle Luis Medina was a constant smothering force against the Dragon offense.

The Indian defense kept the Dragons on their own side of the 50 for most of the night and kept them off the scoreboard until the final two minutes of the contest when the game was well in hand and the back ups were on the field.

For the Chattooga offense, the scoring opening up on the second possession of the third quarter when Lester scored on a 6-yard run to put the Indians up 6-0. The PAT was no good but in the opening minutes of the 4th quarter, E.J. Lackey broke free on a 74-yard run making the score 12-0. The 2-point conversion was no good but the Indians relied on their swarming defense to get the ball back and Chattooga quarterback Clayton Johnson put the nail in the coffin with 2:25 remaining, scoring on a 4-yard bootleg run to put the Indians up 18-0. The final PAT was good and the score was 19-0 as the back-ups took the field for the final two minutes.

Lackey, Price and Lester led the Indians’ ground and pound running game. Lackey had 152 yards and a touchdown on 18 carries, while Lester had 66 yards and a score on 12 carries. Devin Price handled many snaps at quarterback with a dual threat capacity. Price rolled up 105 yards rushing on 12 carries and had a 32-yard reception to convert on third and long. Price was 3-for-3 passing for 21 yards passing.

Clayton Johnson was 3-for-9 passing for 61 yards including huge passes to Price and Malachi Mack.

The win sets up a home game in the playoffs for Chattooga as they welcome the Washington Bulldogs,  the No. 3 seed out of Region 6-AA, led by quarterback Adrien Williams. The 6’2″ 210 lbs senior has thrown for over 1,200 yards this season with a 70% completion rate and 17 touchdowns to just four interceptions. The Bulldog run game has been by committee with freshman Quintavious Lockett bearing the majority of the carries with 86, and is the only ball carrier with over 500 yards rushing. Lockett’s 8 TD’s leads the team on the ground while 6’1″ senior Ronald Mason, 15 catches for 333 yards and 8 TD’s, and speedy junior Vachon Rayes, 24 catches for 525 yards and 5 TD’s, lead the air attack.

Posted by All On Georgia – Chattooga on Friday, November 2, 2018

Chattooga Cheerleading State Bound
One For the Record Books
Posting....