COLUMN: Part of Menlo’s History Lay on the Ground

While activists for the house were still hoping for a chance of salvation for the beloved structure, at about 8 am on the morning of March 15, the bulldozer began knocking at the walls of the house, and in about ten minutes all that was left of the house was a pile of debris, as a part of Menlo’s history lay on the ground. 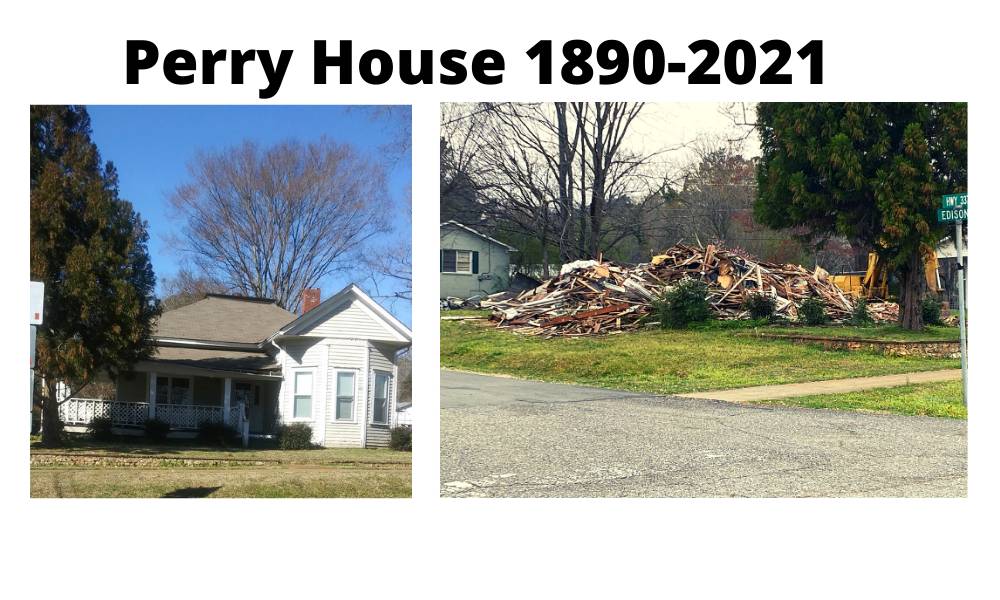 Menlo, Georgia is generally known as a peaceful and quiet town, consisting of its churches, businesses, school, and city government. It has also long-been a town populated of people who give strong regard to the history of the town, and to those who walked before. The times, though, certainly seem to be changing, and some of today’s Menlo citizens do not seem to share the same sentiments as others in regard to history- and opinions, attitude, emotions, and even tempers have flared and clashed during the past few weeks when the people learned that Menlo Baptist Church planned to raze the Perry house, a historic structure which sat on their property. Both the church and the Perry house date to the 1890s. The church was built in 1892, and the Perry house was constructed about 1890.

The Perry house had sat on the corner of 7th Avenue and Edison Street for as long as anyone could remember, and it was one of the few homes left which were in existence before Menlo was ever incorporated as a town. Menlo’s founder, A.J. Lawrence, was said to have been a frequent visitor in the home. It was an attractive structure, with a mansard roof, wrap around porch, heart of pine flooring, built-in bookshelves, and hand-carved mantles and doors. The yard has long been bordered with a little rock wall, which were popular during the latter part of the 19th and through much of the 20th century. The house’s first known occupants were Mr. Jeremiah Perry, a widower, and his children. Eventually each of his children married and moved away, except for one of the younger daughters, Miss Edna Perry- a name which would become famous in Menlo’s school system and in Menlo’s history.

Miss Edna graduated from Menlo High School in 1914, and thereafter left her hometown long enough to attend college. By 1920 she had earned a teaching degree, and was employed as a teacher at her alma mater. She was of a brilliant mind, and the noble ambition of making a difference in the lives of her students was first and foremost in Miss Edna’s career. She taught both Math and English, and it was said that she had a special knack in helping students who struggled with some of the rules and principles of Math and English to better understand and grasp the ideas. She also held a special place in the hearts of each student, and many years later she would remark that she had enjoyed every student she had ever taught.

Miss Edna taught at Menlo all during the roaring 1920s, through the Great Depression of the 1930s, during the war-torn years of the 1940s, and through the infamous rocking years of the 1950s. She is said to have been a no-nonsense, serious teacher, but she still had a heart of gold, and she was so admired and respected by students. In the early 1960s, when the county schools consolidated and Menlo High School closed, Miss Edna taught in the elementary school until her retirement in 1964. By this time she had become so honored and so loved that the City of Menlo called the day or her retirement Miss Edna Perry Day.

She retired to her quiet home in the heart of Menlo, a place she dearly loved. She remained active in town life, and she faithfully attended Menlo Baptist Church, where she had played the piano for services for over 50 years. In later years, Miss Edna’s sister, Mattie Perry Hammond, returned to the Menlo home, and the two sisters lived out their elderly years there. They would park their cars on the Edison Street side of the house, and they enjoyed relaxing on the spacious porch of the home in seasons. The home was frequently visited by the family and friends of both ladies, as well as by numerous former students of Miss Edna.

Miss Edna passed in 1975, and the house on the corner was sold. It went through several owners during the decades of the former century, as well as the early 2000s. The last owners prior to the church were Richard and Patti Settoon, who used the house as a renter home. After the death of Mr. Settoon a member of Menlo Baptist pressed heavily upon Mrs. Settoon to sell the house and lot to the church, insisting that they needed it for their large annual Bible School event. By this time the church had already purchased all of the 337 side of the property, and they wanted the corner lot, as well. After much consideration, Mrs. Settoon somewhat reluctantly sold the house to the church in 2014, at a reduced price, and thinking that she was doing what was the right action.

For the past seven years the house has stood vacant, except for some use during the Bible School week. We all know that an abandoned house soon begins to deteriorate- and we also know that an old house seems to constantly need repairs and expenses. That is part of the quirks of owning old houses, but for those of us who love such houses, the perks far out-weigh the quirks. The deacons and officials of Menlo Baptist, however, do not seem to share this sentiment.

Recently Menlo citizens found out about the church’s plans to demolish the house. Numerous citizens, especially seniors who know something of the house’s history, were very upset about these pending plans. Some people were simply outraged. The church officials received a number of phone calls from concerned people, county-wide, imploring and begging them to save this historic structure. Several people stated they would buy the house and restore it, but church officials stated they would not consider selling the property, and moreover that it was coming down regardless of how anyone felt- and thus it did! While activists for the house were still hoping for a chance of salvation for the beloved structure, at about 8 am on the morning of March 15, the bulldozer began knocking at the walls of the house, and in about ten minutes all that was left of the house was a pile of debris, as a part of Menlo’s history lay on the ground. Today, just over a week later, there is little evidence that a house ever sat on that corner spot, but the hearts of those who tried to save the house, as well as those of much of Menlo know that the lot held a beautiful and charming old house, as well as over 130 years of history. Historians and preservationists saw much potential for the Perry house, and these people, along with many of Menlo’s senior citizens are especially hurt over the loss.

A small town like Menlo should not have to harbor hard feelings toward a religious institution, but sadly the destruction of the Perry house has left a rift between some people of the town and the Menlo Baptist Church officials, and it is likely a division which will not be quickly or easily mend.