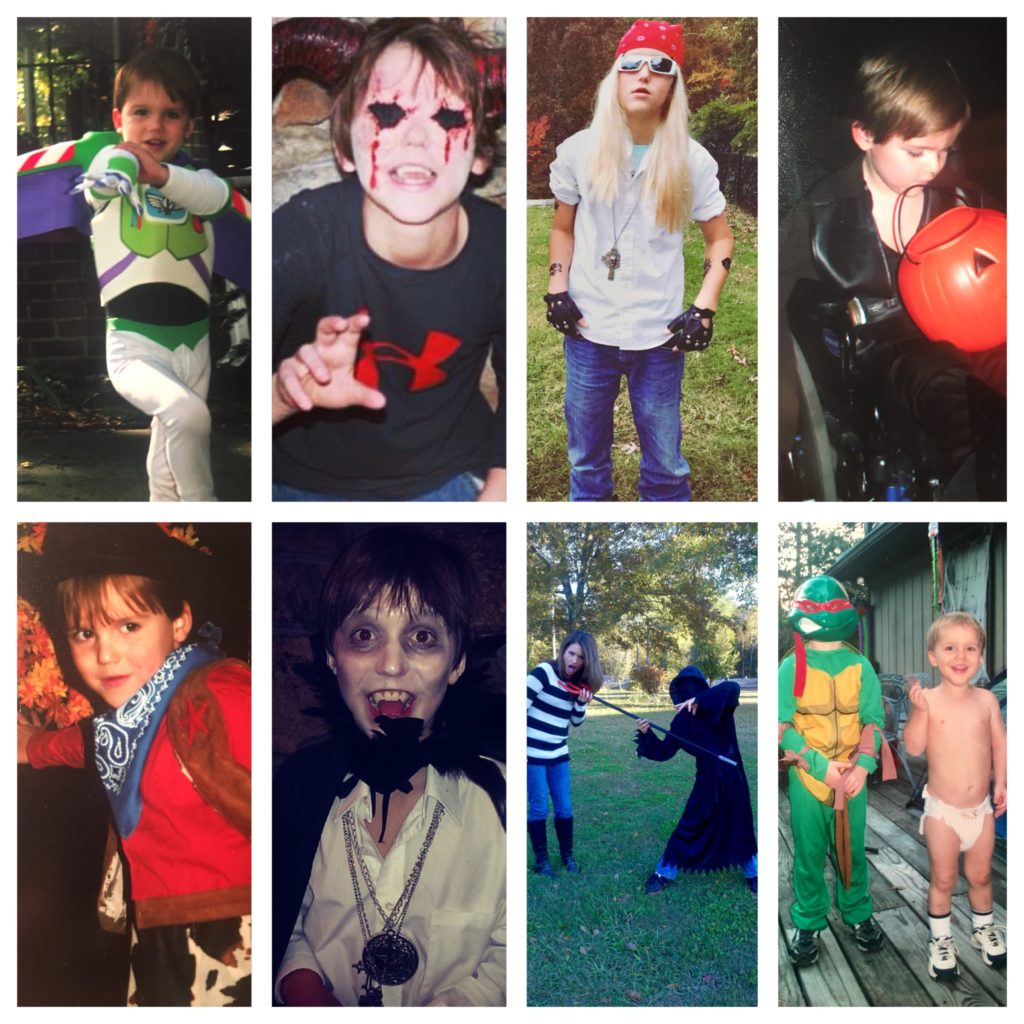 Halloween is a strange holiday to get sentimental over but, this morning I find myself all in the “feels” (thanks to Facebook memories) and searching through photo albums for pictures of a not-so-long-ago time when my son dressed up for Trick or Treating.

Cole is a 15-year-old teenager and completely against even the mention of ‘dressing up’.

Then came Halloween of the Buzz Lightyear era. Cole literally was Buzz Lightyear. And he was Buzz Lightyear for much more than one day out of the year. His first day of preschool he proudly announced to his class that he was Buzz Lightyear and then pointed his laser arm to blast a few of the naysayers. His teachers, thankfully, were both patient and tolerant and asked “Buzz” to please have a seat. Cole eventually obliged, but not before his fearlessness inspired a classmate to proclaim that she was in fact, Batman Girl. Buzz and Batman Girl became their official classroom names for the rest of the school year.

This was also the first time my mom and I took Cole to Disney World… during the Buzz Lightyear phase. We each took turns hugging the man in the Buzz costume because he was, after all, part of our family. The look on Cole’s face after he saw Buzz at Disney is forever sizzled in my gray matter. The expression spoke volumes but simply said, ‘wow, I am going to be huge when I grow up’.

Halloween of the broke-leg Anakin SkyWalker. After Buzz it was, and still is, Star Wars. This was the Halloween in which Cole was in a wheelchair after a monkey bar accident left him with a badly broken leg. While I know that sounds cliche, it is true and, it is why I am against monkey bars to this day. They are absolutely nothing to monkey around with and should be banned from backyards and playgrounds. The wheelchair did nothing to slow Cole’s Halloween fervor.  With his bucket in his lap and red lightsaber in hand, I pushed him through every yard in our neighborhood. This was the most physically exhausting Halloween and gave me a new found respect for parents of wheelchair-bound children.

In the years that followed, Cole would become John Wayne, Jack Sparrow (with a drawn-on mustache that took weeks to come off), the grim reaper, a red-horned demon, a vampire and Axl Rose. Tonight, he will be a moody 15-year old refusing to drink apple cider with me and watching another marathon of his favorite show, Andy Griffith… episode after episode.

This is not our first Halloween of not dressing up. He did not dress up last year but I convinced myself it was just a phase and that the next year he would again participate in the Halloween tradition one more time. Sadly… it looks like I was wrong.

Parents enjoy tonight’s hectic festivities with your children. Take pictures and print them out so one morning you can drive yourself crazy trying to find exactly where you put ‘that album’ and you too can remember the Halloweens of years past.

And to those who believe Halloween is an evil holiday, I  do understand. I was like you for the first year but, I am so thankful I allowed Cole to dress up and participate in the fun of Halloween. The candy is for the kids… the memories will be for you.