“He was feeding himself with the biggest smile on his face,” Misty said. “It was absolutely magical. He regained his independence with a fork. I wish I could have taken my mask down to show him how big I was smiling. It was just so wonderful to see him eat by himself.” 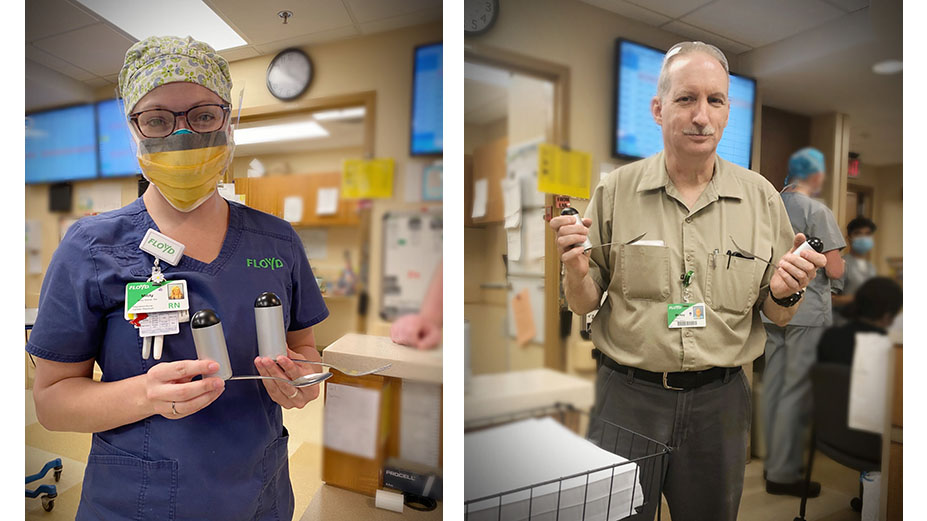 As a skilled maintenance mechanic at Floyd, Mickey Tuck would probably tell you he doesn’t have a role in patient care. Most days, he is making sure the systems are running to keep the patients, visitors and employees safe, but when he was approached by a caring nurse with an idea, Mickey moved to the frontlines of patient care without missing a beat.

Nurse Misty Shinall was assigned to Tom, a relatively young patient whose previous stroke had affected his speech and limited the use of his hands. Misty immediately felt a connection. She knew she could help Tom. Though communication was difficult, it was possible. Tom had a good appetite, but he was underweight. There was a reason. Tom’s diet was limited to liquids because he didn’t have the strength or dexterity in his hands to grip a fork or spoon.

Tom’s care team, led by Misty, listened to his concerns. They gave him a stress ball so that he could begin strengthening his hands. With staff available to help him eat, Tom welcomed solid foods back into his diet. “He had not eaten solid food for five days prior to admission. That just really pulled on my heart,” she said.

Misty went home and researched devices Tom could use to feed himself. He didn’t have resources to purchase adaptive utensils he could use, so Misty investigated do-it-yourself options.

“I kind of had everybody on the lookout, even my sister,” Misty said. “I looked on Pinterest. I had things in my Amazon cart. My sister looked at pool noodles. I was determined to figure out a way that we could help.”

Misty tried her hand at crafting a solution using a fork and spoon from the cafeteria, gauze and pressure tape, but the fork and spoon needed to be twisted for her design to work. Unit Secretary Mandy Durham called Plant Facilities for help. Mickey got the assignment.

When Mickey learned why the request was made, he asked for a little time to work on something. He came back two or three times with different prototypes. The finished result was two pieces of pipe cut to fit in Tom’s palm, ends sanded smooth, with a fork attached to one and spoon attached to the other, each twisted at the perfect angle for Tom to use.

Tom was overwhelmed. At lunch time, the certified nurse assistant helping him eat called for Misty.

“He was feeding himself with the biggest smile on his face,” Misty said. “It was absolutely magical. He regained his independence with a fork. I wish I could have taken my mask down to show him how big I was smiling. It was just so wonderful to see him eat by himself.”

Misty called Mickey to witness Tom use their invention. Mickey was honored to make the connection. After thanking Tom for letting him be a part of his care, Mickey lead the three in prayer.

“It was probably one of the most rewarding things in my career,” said Misty, who has worked 15 years in health care.

When Tom was discharged, he took Misty and Mickey’s invention with him, and Misty made sure to educate his family on how to help him eat by himself. Their work on his behalf motivated Tom to speak up as he was being discharged, Misty said.

“When we got him in the wheelchair, he said, as clearly as he had said anything, ‘I will never forget you.’”