Video: New line of Vans shoes being made in Trion 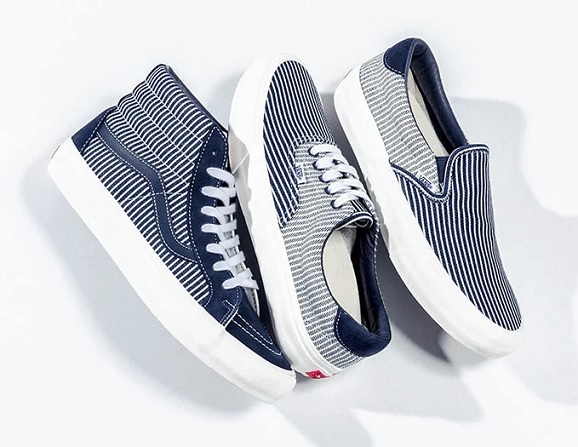 In the latest big news for Mount Vernon Mills, Vans Vault announced the company has teamed up with the oldest surviving denim mill in the US, Mount Vernon Mills, for a pack of blue and white striped denim sneakers, reworking three of the California skate brand’s most iconic silhouettes: the Slip-On, Era, and Sk8-Hi. The footwear offerings come alongside matching apparel, which includes a workwear jacket, tote, and a cap.

Here’s a closer look at the striped blue and white cloth being manufactured for the Vans line in Trion. Eight blue threads and four white thread alternate for the striped style.

Mount Vernon Mills News , @VANS_66 has teamed up with the oldest surviving denim mill in the US, Mount Vernon Mills reworking three of the California skate brand’s most iconic silhouettes: the Slip-On, Era, and Sk8-Hi.

Here’s a closer look at the cloth being manufactured pic.twitter.com/T974UVancY

Vans is an American manufacturer of skateboarding shoes and related apparel, based in Santa Ana, California and owned by VF Corporation.  The company was founded in 1966 and manufactured industry-specific shoes targeted towards skaters.  In 1982 the movie “Fast Times at Ridgemont High” featered surfer dude Jeff Spicoli played by actor Sean Penn, prominently seen wearing Vans Checkered Slip-Ons throughout the film, and also in the film poster.  In 1994, the Vans company merged with VF of North Carolina.

Mount Vernon Mill is a textile denim mill located in Trion, Georgia. Mount Vernon pays about eighty percent of Trion’s taxes. It is the largest employer in Chattooga County, with about 1700 employees.

In 1913, a gym, library, apartments, theater, bowling alley, and hospital were built in Trion.

During World War II, the mill produced enough fabric to make a reported 10,500 fatigue suits and over seven and a half billion yards for gun patches.

It wasn’t until 1971 when many new machines were installed to produce denim.

On February 16, 1990 a flood almost ruined the machines, but after ten days the mill was running again.

Today the mill has over a million square feet of manufacturing space and produces over two million pounds of cotton and denim each week. The denim is shipped to different locations in the United States and to foreign countries.