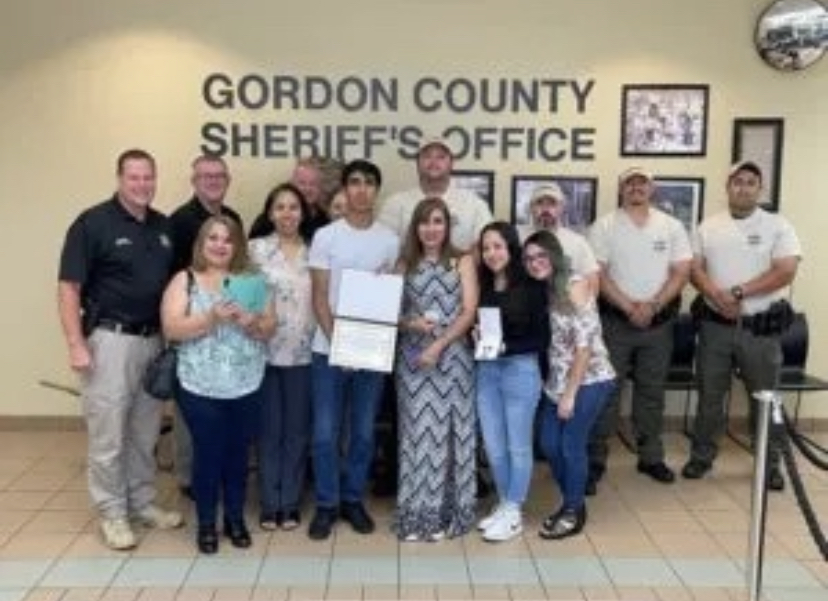 On Wednesday (May 18), Gordon County Sheriff Mitch Ralston recognized a Lindale resident who is employed in Gordon County, for locating a lost/runaway child. On May 11, shortly after midnight, Ms. Daria Escutia-Hernandez was driving west on State Route 53 toward her home in Lindale, Georgia. Along the route, she observed a small child walking along the side of the roadway. Ms. Escutia-Hernandez immediately stopped, approached the child and put him inside her car. She called 911 and kept the child safely until the arrival of deputy sheriffs a few minutes later. The deputies took the child home in Plainville and learned that he had left the house without the knowledge of the adults there.

Sheriff Mitch Ralston presented Ms. Escutia-Hernandez with a Citizen Service Awardfor her actions on May 11. “In what was potentially a very dangerous situation on a major highway late at night, Ms. Escutia-Hernandez certainly distinguished herself in stopping and rendering aid to a 7 year old child alone on the roadway, not merely notifying the authorities, but personally ensuring the child’s safety until the arrival of emergency personnel. Ms. Escutia-Hernadez is a fine example of a compassionate and caring citizen, and deserves our thanks and recognition.”