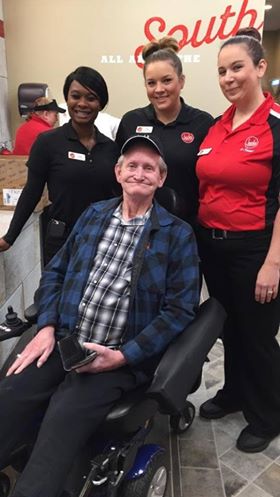 Jack’s Restaurant Chain opened their 150th restaurant in Summerville, Georgia on Monday April 9th. Jack’s decided to let a resident at neighboring Oakview Nursing Home be the first customer at the new store. Oakview Resident, Cecil Walker, was selected and nursing home staff told AllOnGeorgia “Mr. Walker was so excited, he watched the daily work and he already has his Jack’s cap.”  Monday morning Mr. Walker was escorted across the street and into the new Jack’s where he was treated like royalty.