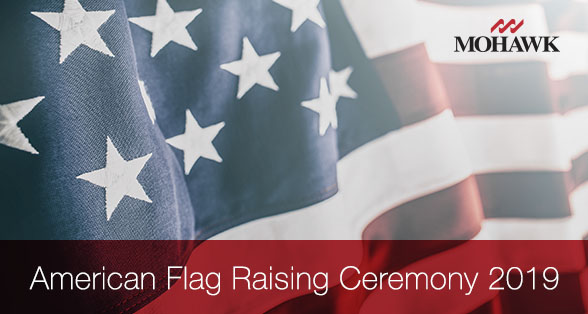 “We are proud to be an American company, and we are inspired by the ingenuity and commitment of our exceptional people,” said Jeff Lorberbaum, Mohawk Industries’ chairman and chief executive officer. “Our competitive edge comes from more than 20,000 U.S. employees who make, sell and deliver our products, with about half of those working in Georgia. Hundreds are veterans who nobly served our country, which makes this flag especially poignant as a means of expressing our appreciation to our employees.”

According to the company, the flag is the largest in Georgia, measuring 45 feet high by 75 feet wide and weighing over 150 pounds. Towering from a 130-foot pole on the company’s Union Grove campus, the flag will be a landmark for drivers along I-75. In addition to Union Grove, Mohawk said it operates a network of more than 30 manufacturing, distribution and administrative facilities across Georgia, providing a substantial economic impact in each community.

Mohawk said it takes great pride in the long tenure of its employees, with more than one in every eight having been with the company 25 years or more. During the event, Mohawk will recognize 15 area employees with 30 or more years of service.

“These individuals represent the thousands of men and women at Mohawk who produce the best American-made flooring, using state-of-the-art technology combined with old-fashioned innovation and creativity. We proudly raise this flag in their honor,” said Lorberbaum.

Mohawk added that it is supporting more than 120 nonprofit organizations, including the Northwest Georgia Council of Boy Scouts of America and Girl Scouts of Greater Atlanta. Local scouts will help raise the flag during the ceremony and, afterwards, will receive badges for their uniforms.

Mohawk will also donate flooring to Camp Sidney Dew and Camp Misty Mountain in northwest Georgia to refurbish indoor community spaces for use by future generations and will provide $10,000 to sponsor scouts to attend either camp or their national convention.

“These donations will have a huge impact on the boys and girls of the Northwest Georgia Council of Boy Scouts of America and Girl Scouts of Greater Atlanta,” said Carley Ferguson, a board member of Girl Scouts and vice president of internal audit at Mohawk. “The provided flooring will update facilities for members to experience nature and build lifetime friendships, while the funds will help them attend camps where they will learn teamwork and leadership skills.”

After the flag was raised, Rebecca Howell of Cochran, Ga., most recently featured on NBC’s The Voice, will perform the national anthem. Other event highlights included remarks by Mohawk’s Tom Lape, president of residential flooring, and Jeff Lorberbaum, plus a performance by the Spirit of Atlanta Drumline and a barbecue lunch.