Chattooga Farm Bureau kicks off Farm-City Week observations with a drop-in breakfast at the Chattooga AG Building on November 17 from 7- 9 a.m. 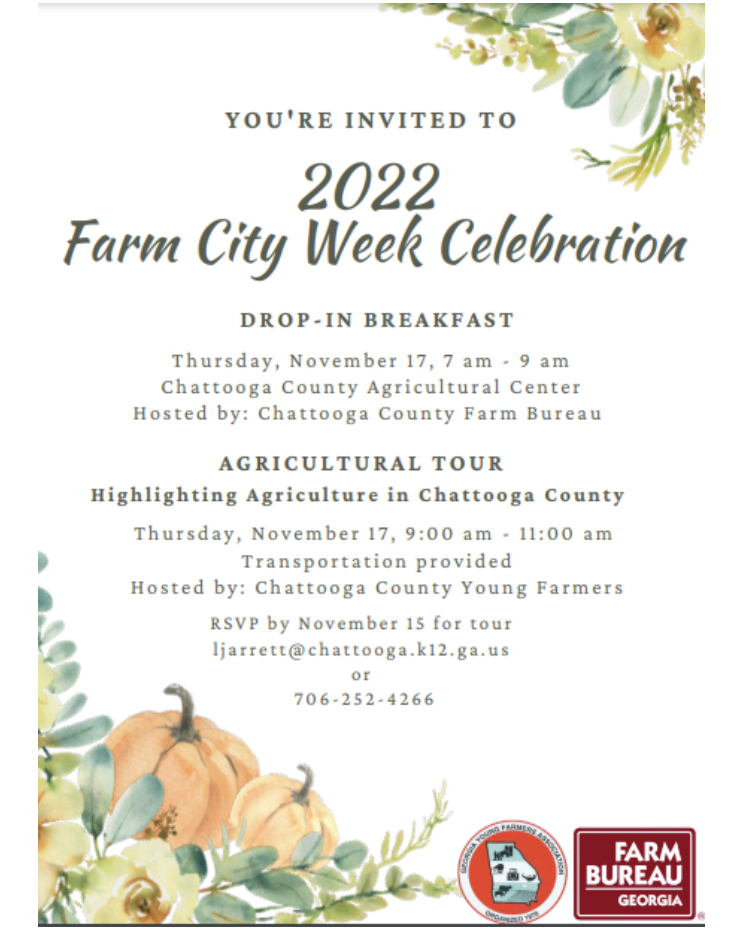 Combos become combos because their parts, when put together, make each other better: Peanut butter and jelly; shrimp and grits; steak and potatoes; tacos and Tuesdays; jeans and a t-shirt; suit and tie. All those parts and the resulting combos are produced in Georgia, which is home to another pair worth remembering and celebrating:
Farms and cities.

Farm-City Week highlights the relationship between Georgia farmers and their partners in urban areas who prepare, transport, market and retail the food and fiber that farmers grow for consumers. Kiwanis International began Farm-City Week in 1955 to increase the understanding of the partnership between urban and rural residents.

Agriculture is Georgia’s largest economic sector, and farmers depend on their urban partners such as their bankers, Extension agents, equipment, and supply salespeople, to keep the agricultural economy going. In 2019, food and fiber production, related processing and delivery industries contributed $70.1 billion to Georgia’s economy according to the University of Georgia Center for Agribusiness and Economic Development (CAED). Agriculture and its related industries contributed 359,220 jobs in Georgia.

Farm-City Week is a great time to pause and understand food prices. In 2019, farmers received on average 7.6 cents out of every dollar spent on food at home and away from home, according to the USDA’s Economic Research Service. The rest of the dollar went to wages and materials for food preparation, marketing, transportation, and distribution.

In 2020, Americans spent an average of 8.6% of their disposable personal income on food, less than consumers in any other country spend. America’s healthy, safe, and consistent food supply is so affordable thanks to the production and delivery partnership between farmers and urban businesses.

As the holidays draw near, Georgia Farm Bureau and Chattooga Farm Bureau invite you to celebrate that relationship by observing Farm-City Week Nov. 17-24. As you eat a meal during this week, pause to consider all who supported the farms and farmers providing food to your food table. Visit Georgia Farm Bureau’s website gfb.org and go to the AG in the Classroom section for great information and activities for your children. Just where does that cornbread dressing come from?

Chattooga Farm Bureau kicks off Farm-City Week observations with a drop-in breakfast at the Chattooga AG Building on November 17 from 7- 9 a.m. Chattooga County Young Farmers continues to build the farm-city connection with a tour of local farms and farm related businesses from 9-11 a.m. Contact Chattooga Farm Bureau for further information. 706-857-3214

Veterans Appreciation Lunch
Power of Credit and Homeownership Class to be held in Summerville
Posting....