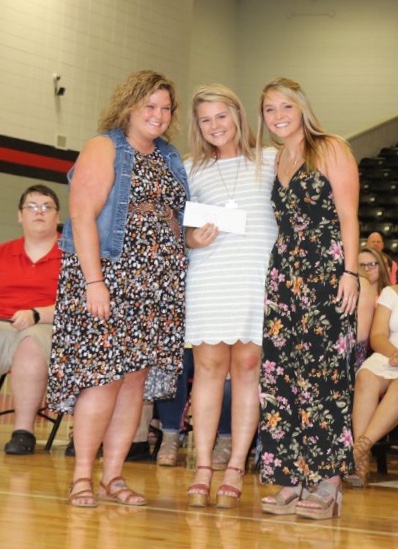 The Jessie Tudor Heart Like Mine Memorial Scholarship was established to remember the life and legacy of a great woman, friend, daughter, sister and niece.

Jessie was more than any one of these things- she was free spirit, a loyal friend, a genuine smile, her family’s go to, a helping hand, she had a big, bold, artistic personality, and a young soul.

Jessie Tudor passed away on Monday, May 15, 2017. In the 12 months that have came and went the Tudor family has made it their mission to honor Jessie’s life and passion for helping others by creating a world that Jessie’s love continues to impact.

The scholarship is available to seniors at both Trion High School and Chattooga High School. This year, the submission process included an essay detailing ways in which the student applying felt they had helped others.

The essays from both schools were numbered anonymously and given to Jessie’s mother, Christy, Jessie’s sisters Baylee and Abbey, and two of Jessie’s best friends, Anna Swafford and Christina McRae, to read. There were 20 total essays submitted this year. Abbey, Chattooga’s 2017 Valedictorian opted out of reading Chattooga’s, because of her close relationship with several members of that class; she didn’t think that they would be anonymous to her. After reading the essays, Abby Hosmer, from Chattooga High School and Laurie Gentry from Trion High School were selected as the first winners of the Jessie Tudor Heart Like Mine Memorial Scholarship.

Hosmer will be attending Kennesaw State in the Fall.

“The Tudor family loves everyone. For as long as anyone can remember they have helped and loved every single person they could. I was blessed throughout my whole high school career to be welcomed into such a beautiful, loving family. Like myself, Jessie had a big heart, and she loved very hard. I have been extremely blessed to receive the scholarship that was made in her honor. I hope that I will be able to live up to the wonderfulness that Jessie was. She is a big sister to me, as are Baylee and Abbey. And I love all of the Tudor’s very much and I am thankful to have been blessed with Jessie’s scholarship,” Hosmer said.

Gentry will be attending Georgia College and State University in Milledgeville. Gentry will major in Art Therapy, which is like physical and occupational therapy only it is practiced using art to stimulate the right parts of the brain. Gentry said that being selected for the Jessie Tudor scholarship was, “the most heartwarming award because I know how it feels to lose someone close to me, I feel honored they chose me and I will work hard to honor their choice.”