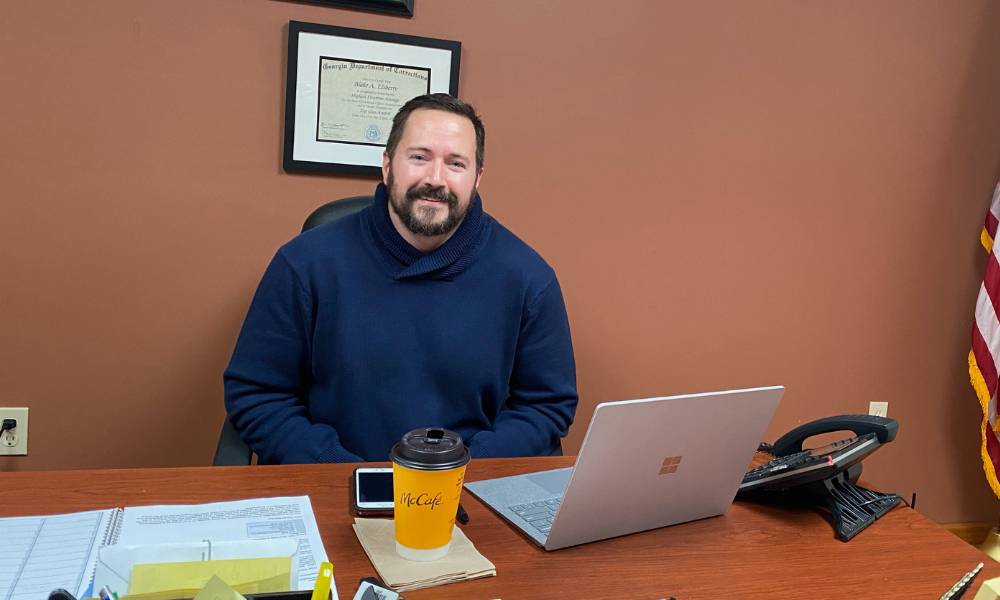 AllOnGeorgia reached out to Chattooga County Sole Commissioner December 20 to ask a few questions regarding the state of the county. Commissioner Elsberry sent the following information on the subjects AllOnGeorgia inquired about on January 5.

ELSBERRY: The county has historically pulled and used a $4.5 million dollar TAN (Tax Anticipation Note). My first year in office I was able to reduce that to $2.8 million.

The county has GEFA loans and USDA bonds that were taken out for water projects in 2008, 2009, 2011, 2012. We had been looking at refinancing to get a lower interest rate and save some on the interest. However, the current increases of interest rates has postponed that for now. The total amount on that debt for those is around $7 million
dollars.

All other outstanding bills that were here when I came into office my first year have been paid, and all current bills are being paid on time.

What is the current millage rate, how does that rank historically?

How many county roads have been paved/resurfaced since you have been in office? How many are currently on the repair list? Where does that funding come from?

ELSBERRY: When I first came into office we had some major equipment issues that were hindering the county’s ability to just do regular road maintenance. We have been addressing those issues as funding allows.

We have paved/resurfaced around 23 miles of road since I have been in office.

We keep a running list of roads to be resurfaced. Usually about the time we complete one road, another one takes its place. There are anywhere between 15 to 20 county roads on the list at any given time. We are currently working on the list for the road paving for the 2023 LMIG Grant.

A majority of the funding comes from the LMIG Grant ( Local Maintenance and Improvement Grant) from the state, which requires a 30% match. We use SPLOST funds for our match for that grant. We also utilize SPLOST funds when available for additional road work.

How much money has the county received in grants since you have been in office? What are the grants being used for?

ELSBERRY: We have been awarded over $ 3.5 million in grants since I have been in office. A large chunk of that is for the fiber broadband project. The rest has been smaller amounts for things like the exterior theater restoration, safety equipment, and other smaller grants for individual departments.

How many trainings, workshops, continuing education, board meetings, etc. have you attended since you have been in office. How many days of work did these trainings require, what was the cost of the trainings to the county and what was the tangible outcome?

We have spent roughly $5,500 for continuing education and training.

Some of the training and meetings are still being held through Zoom.

The Northwest Georgia Regional Commission and the North Georgia Community Action Inc. both hold regularly scheduled meetings. I serve as Treasurer to both.

I also serve as vice-chairman for ACCG General County Policy legislative committee and as chairman for the ACCG sub- committee on Housing Legislation.

I would say the tangible outcome of these meetings, board positions, and training is the resources that are made available through being an active participant. Whether that be in the form of technical assistance, grant opportunities, increasing our knowledge base, learning new solutions to problems we encounter, building relationships, or being informed on the most up to date information as it pertains to local government. Our active participation also means that Chattooga County is well represented in our region and the state of Georgia.

Many times small rural counties like ours get lost in the legislative policy, economic, and general topics discussions because they have no voice at the table. The positions we hold on these committees and boards insures that Chattooga County has a voice, and is an active stakeholder in regional and state decisions effecting our communities.

How many public meetings (advertised through all local media or on the county website) have you held since taking office?  Do you feel that you have held true to your campaign pledge of holding regular public meetings?

(While a candidate Elsberry had this to say about meetings: If elected I want to have budget meetings with all elected officials who receive county money on a scheduled basis. I will also have regularly scheduled, open meetings for the community. These “clear direction” meetings will be open to the public and recorded for those who are unable to attend. The community will have the opportunity to ask questions and provide suggestions. At these meetings I will explain what the commissioner’s office is working on and the plan for each item or project. At these meetings, I will welcome any ideas or suggestions because I believe we are all in this together. We need those ideas to build upon and move forward. these meetings will be beneficial as we organize the new budget and forge the path of saving money.”)

ELSBERRY: We have had numerous public meetings for a multitude of different reasons since I have been in office. And of course the twice a month media meetings, which are open to the public, have been a big help in getting information out.

It is the general/regularly scheduled meetings that has been difficult to figure out what would work the best. We tried the “coffee with the commissioner”, and had two of those. The first one was well received, but the second one had no public attendance.

I think we could do a better job at having just a general/regularly scheduled public meeting and I have been working on ideas to have a meeting that would be informative, and not just a public meeting for the sake of having one. Starting this month we are going to start doing a monthly report meeting with all the department heads that are under the Commissioner’s office. That way each department can report on what they are working on, what they have completed, what may be coming up next in their departments, and/or just give general updates. I think this would be helpful information and could maybe help educate citizens on what each department does on a regular basis.

We will announce the meeting date for January next week.

**AOG correction to the statement “but the second one had no public attendance”: the second public meeting was attended by members of the Garden Club, county staff and media.*****