For the Chattooga County school system, safety is viewed through the eyes of a former Marine Corps Colonel. Superintendent Jim Lenderman spent the better part of three decades protecting Marines and now, he is putting that experience and knowledge to use in protecting the students he oversees. 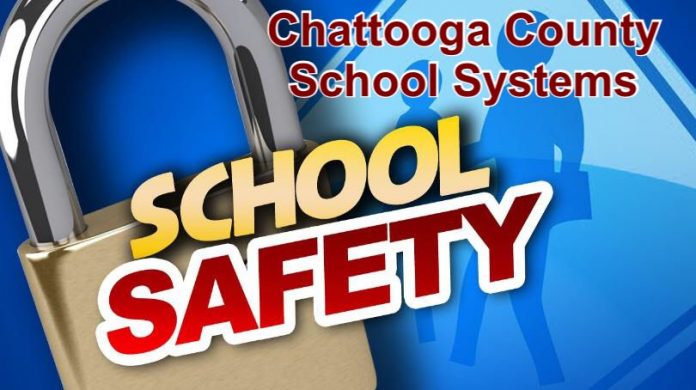 For the Chattooga County School System, safety is viewed through the eyes of a former Marine Corps Colonel. Superintendent Jim Lenderman spent the better part of three decades protecting Marines and now, he is putting that experience and knowledge to use in protecting the students he oversees.

At the July Board of Education meeting, Lenderman issued a school system security update focusing on the progress achieved so far and which items remain in the works.

Lenderman emphasized that the summary was exactly that, a summary. He is holding many of the specific details away from the general public. “I don’t want to list everything we are doing at every school because then you are giving someone who might want to enter into a school a way to get around some of the things we are installing,” said Lenderman.

Panic buttons will be in each school. These buttons will be at the main desk allowing the secretary instant access to emergency personnel. With the press of a button, they can request a dispatch for law enforcement.

Room numbers: Every school will have four inch room numbers or letters that will be placed on the outside of each room so the rooms will be easily identified.

More Student Resource Officers: Four have already been implemented and Mr. Lenderman said Sheriff Schrader assured him two more resource officers will be added to the school system by the first week of school.

Installing a Safe/Armory with high-powered weapons: The exact size and location of the armory will remain confidential information but Lenderman has assured school board members that each school will possess the capability of providing defense against armed assailants.

Peep-holes for all classroom doors: Workers are in the process of installing peep holes on each classroom door.  “When you have an alarm and someone is in your school you are supposed to lock your door, if a child does not get in you are not supposed to open your door… and that is something I don’t know if I can do. By having a peep hole we will be at least able to look out there and see it is a child by themselves, but do not open unless you know for sure…”

There will also be bullet resistant glass installed on certain windows and doors at each school.

“Terrorism is increasing and we must be prepared,” Lenderman said. “We have the funding to do these things, children’s safety and welfare are our number one priority.”