BOE Scheduling Conflict Leaves Some Residents with a Disappointing Decision 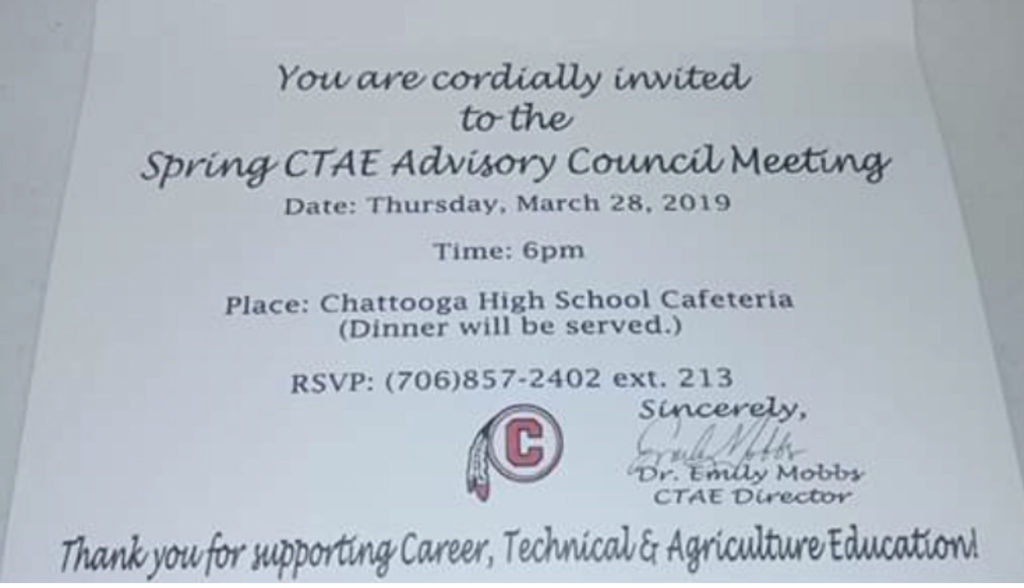 The Spring CTAE Advisory Council meeting will be held this Thursday evening at 6 p.m. in the Chattooga High School cafeteria. CTAE and school officials invited students who have competed in their CTSO’s, their parents, and the Board of Education members to join the event where students will be recognized and their accomplishments celebrated.

The bi-annual event has been on the school calendar since July 2018 according to Dr. Emily Mobbs, CTAE Director and Board of Education members received formal invitations two weeks ago, according to the central office.

Many within the system were surprised to discover that the Chattooga County Board of Education announced they would hold a Called Board Meeting on Thursday, March 28, 2019 at 6:00 p.m., the exact same time as the Spring CTAE Advisory Council meeting.  The BOE meeting will be held at the Chattooga County Ed Center, located at 206 Penn Street in Summerville.

According to a press release from the Superintendent’s office, this Called Meeting will be for the Board to take action on the following items:

Because over half of all high school students within the county system benefit from CTAE programs, below is an explanation of what the CTAE Advisory Committee entails:

An advisory committee is a collection of individuals who bring unique knowledge and skills to a shared purpose. The advisory committee plays an important public relations role as well as providing program staff with a fresh perspective on programmatic issues.

A properly composed and structured advisory committee can be a tremendous compliment to the effectiveness of a program as it works to carry out a specific initiative.

Due to Federal Perkins requirements, Chattooga CTAE are required to have two meetings per year with advisory members. Members are to include stakeholders from business and industry, parents, students, and school personnel. Each program area requests/selects members from the community and career path area to serve on their committee. The group meets as a whole group, then separate for individual program meetings. This is in addition to the daily contact our teachers make with their members.

The Fall meeting was a luncheon immediately following the College and Career Fair held in November in the War Lodge.

AllOnGeorgia reached out to the BOE Chairman John Agnew for comment on this most recent scheduling conflict and was given no response.

Board Member Brad Hayes told AllOnGeorgia, “I was planning on attending the CTAE Banquet before I learned of the called meeting yesterday afternoon. I’ll attend both.”

On Wednesday March 20th, the Chattooga County Board of Education school visits were canceled due to scheduling conflicts. The visits had been approved at the January 17, 2019 meeting.