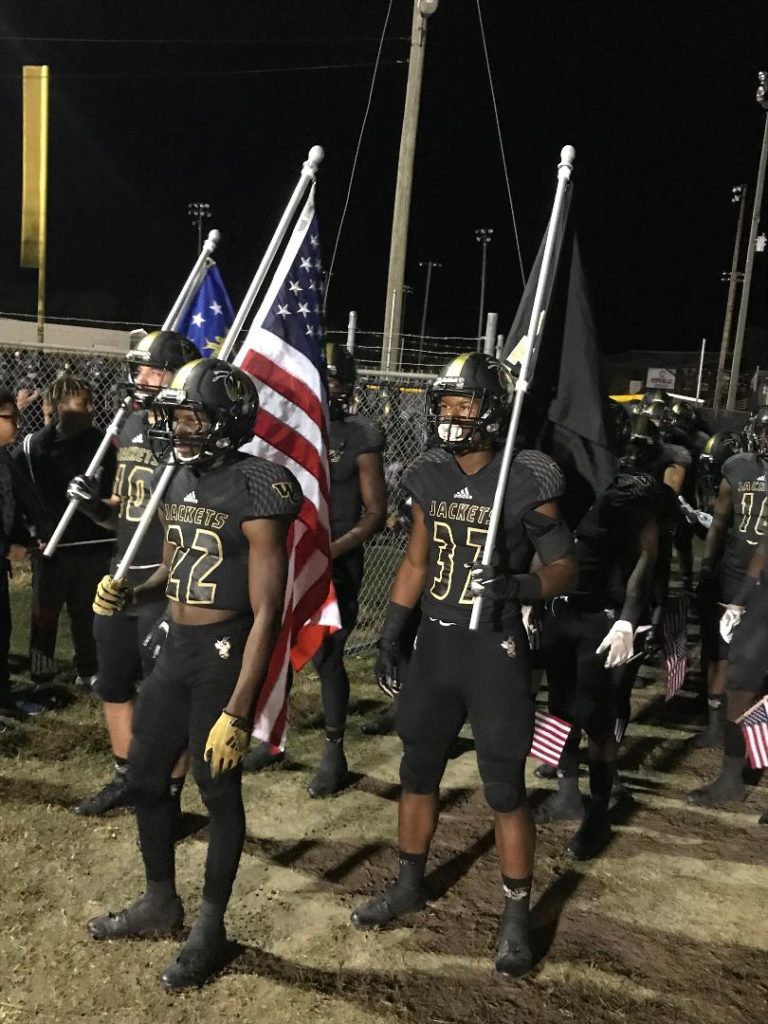 Wayne County’s victory over Ware County on Friday night was big in more ways than one.

The 28-21 triumph by the Yellow Jackets at Jaycee Stadium in Jesup secured a second straight Region 2-5A championship and also allowed the Jackets to complete a perfect 10-0 regular season.

The Jackets have not won back-to-back region titles since the 1975-76 seasons when Lindsey Scott was wearing the black and gold.

The 10-0 season finish was also the first for Wayne since the 1993 season.

Wayne coach Ken Cribb, who is 19-2 thus far in two seasons with the Jackets, simply shook his head when he was reminded of what his team accomplished with Friday’s victory over the rival Gators from Waycross.

As the region champion, Wayne is guaranteed at least two home playoff games if it can survive its Class 5A first-round matchup next week against Jonesboro in Jesup. The Jackets, who are ranked No. 1 in the Southeast Georgia High School Football Power Poll, reached the second round last season before losing to Jones County at home.

Ware finishes the regular season with a 7-3 record. Like the Jackets, the Gators had won their first three region games to set up the showdown with Wayne for the region crown. The Gators will be the No. 2 seed from the region for the playoffs and will host Riverdale next week.

Ware grabbed the early momentum Friday just as fans were settling into their seats at the jam-packed stadium that has been the longtime home for the Jackets.

The Gators scored on their first play of the game following a Wayne punt. Freshman quarterback Thomas Castellanos threw a 57-yard TD strike to a wide-open Caleb Stewart for an easy score and a 7-0 lead after the extra-point.

Wayne didn’t move on its first two series, but the Jackets motored 80 yards in 10 plays to tie the score on their third possession when Shamar Taylor hit Ashby Cribb over the middle on a 22-yard TD pass in the closing seconds of the opening quarter. The Jackets missed the PAT.

Wayne scored the only touchdown in the second quarter when the Jackets’ defense pressured Castellanos into an ill-advised pass and an interception by Taveron Hines at the Ware 36.

The Jackets would score in the short-field when Taylor hit a diving Kaliz Hadley in the end zone with 7:10 to go before halftime. The Jackets converted a two-point try with star running MJ Fuller scoring to make it 14-7.

Wayne had a chance to extend its lead before halftime when it drove from its own 20 to the Ware 5, but an interception by Kevin Weatherspoon ended the threat and left the score at 14-7 at intermission.

The Gators drove to tie the game on their second series in the third period. A pass interference call against Wayne on third down gave Ware a fresh set of downs, and the Gators took advantage, scoring on a 39-yard pass from Castellanos to Jared Campbell to tie the score.

The Jackets quickly answered, however, to regain the lead. Taylor would fake a handoff to his left and then kept the ball, going off right tackle and racing free for a 56-yard scoring jaunt that gave the home team a 21-14 lead with 2:41 to go in the third.

Wayne would capitalize on a third turnover by Ware with just over 7 minutes to go in the game. A mishandled punt allowed the Jackets to regain possession at the Ware 48.

From there, Wayne needed just six plays to go up 28-14 when Ashby Cribb scored on a sneak with 4:56 to play.

Ware didn’t quit, however. Castellanos led his team on a 70-yard scoring march which he finished off with a 16-yard TD strike on a slant over the middle to Jeremiah O’hara to get the Gators within 28-21.

Wayne couldn’t get a first down on its ensuing possession, so it had to punt and give the ball back to the Gators.

Ware took over at its own 48 with 1:26 left, but after three straight incompletions, Wayne’s Logan Pritchard sacked Castellanos on fourth down to seal the victory for the Jackets.

Wayne won despite having 12 penalties for 130 yards.

“That was a quality football game,” Ken Cribb said. “Both coaching staffs did a good job and the kids played their guts out.”

Also around Southeast Georgia on Friday night, other results were as follows:

The Bears came from way down at halftime to knock off Liberty and capture the Region 2-3A title with another thrilling victory in Blackshear.

Also, Pierce closed out a perfect 10-0 regular season with the victory and will now look toward the Class 3A state playoffs as a No. 1 seed after going 4-0 in region games.

The stunning loss left Liberty with a 6-3 record and a 3-2 mark in the region. The Panthers, who had won the last two region titles, will be the No. 3 seed from the region for the state playoffs this year.

The Bears trailed 26-7 at halftime after a disastrous finish to the first half. A fumble recovery by Liberty deep in Pierce territory led to a touchdown by the Panthers for a 20-6 lead with just under a minute to play before the break.

And then with Pierce trying to put together something before the half, a 52-yard interception return by Liberty’s Markell Johnson made it 26-7 at intermission.

The Bears clawed their way back in the game in the third quarter as they rode the running of senior John Jones who carried for 137 of his game-high 216 yards and three scores after halftime.

Jones, who suffered from the flu early in the week and missed two practices, scored from 10 yards as Pierce took the second-half kick in for a touchdown to make it 26-14 less than four minutes into the third frame.

The Pierce defense stopped Liberty on its first possession of the third stanza, and on the Bears’ very next offensive play, Jones took a handoff 46 yards to the house to make it a 26-21 game.

That was the score going into the final 12 minutes, and it remained that way until late in the game.

Pierce would complete its comeback when Jones scored from 2 yards to put the Bears in front for the first time all game with only 58 seconds left . Jermaine Brewton then hit Dee Bethea for two points and Pierce was up 29-26.

The touchdown came after a 42-yard throw and catch from Brewton to Dekota Long to the Liberty 9.

With no timeouts, Liberty started its last drive on its own 15. The contest ended with the Bears knocking down a Hail Mary on fourth down to seal it.

Last week, the Bears won 27-26 in overtime in Baxley when it blocked an extra-point by the Pirates to escape with the victory.

Pierce fell behind 14-0 against Liberty which got a pair of early scores from running back Kris Coleman who ran for 103 yards on 18 carries.

Bethea finished with 217 all-purpose yards with 39 rushing, 79 receiving and 99 on kick returns.

Austin Jernigan and Cam Douberly had 12 tackles eah for Pierce.

The Bears will host Windsor Forest in their playoff opener next week.

Camden won its biggest game of the Bob Sphire era over the Blue Devils in Kingsland.

The win allowed Camden to secure a playoff spot as the No. 3 seed from Region 1-7A.

It was the first region win for the Wildcats under Sphire as they lost all three league games last fall in his first season at the helm.

Camden is now 7-3 heading into the postseason after winning only three games last year.

The Wildcats trailed 14-0 early, but they rallied and were tied with Tift at 21-all going into intermission.

Camden faked a field goal from the Tift 35 to tie the game at 14-14 when holder Tracy Dorminy threw a pass to Ronnin Wright who took it the distance to even the score after the extra-point.

Camden would take the lead on a blocked punt the next time Tift had the ball with Jordan Billups picking up the ball and going 25 yards to put the home side up for the first time at 21-14.

The Blue Devils scored on a 39-yard pass before the end of the half to forge the 21-21 score at intermission.

Camden, playing with its backup quarterback Cody McCartha, regained the lead on its first second-half series when McCartha and Logan Berryhill hooked up for a 28-yard scoring strike.

Tift started a drive at the Camden 35 in the fourth quarter with a chance to tie the game but had to settle for a field goal that made it 28-24 with 6:47 left.

Camden could have put away the game had it scored after driving inside the Tift 10, but a fumble on third down from the 8 was recovered by the visitors at the 1 with three minutes remaining.

Tift would come off the goal line and quickly move to the Camden 37 with just over a minute to go, but the home defense stiffened and held the Devils on downs, taking over at the 42 to seal the win.

Camden will go to Walton in the first round next week.

The Rebels earned a home game in the first round of the Class 6A playoffs with their shutout on the road.

Effingham, Richmond Hill and Bradwell Institute all tied with 2-2 records in Region 2-6A games behind league winner Glynn Academy.

The Rebels won the tiebreaker for the No. 2 seed with Richmond Hill then getting the third seed by defeating Bradwell in their earlier league game.

Effingham (6-4) scored touchdowns in the second and third periods while keeping Richmond Hill (4-5) from scoring over all 48 minutes.

The Rebels checked Luke Carter to 107 yards passing as he finished 11-of-22 for the night. Carter also led the Wildcats with 64 yards rushing.

Jalen Rouse had 12 carries for 50 yards for Richmond Hill.

The Indians cruised past Lanier in their season finale which was played at Lanier.

Lanier, which has never beaten Charlton, finished the year without a win, going 0-10 on the season.

Charlton’s playoff bracket will be determined by the state power rankings for Class A.

The Pirates closed the regular season with a big finish as they steamrolled the Battle Creek Warriors.

The Pirates were coming off last week’s bitter 27-26 home loss to Pierce which knocked them out of the running for the Region 2-3A title.

Because Pierce defeated Liberty on Friday, Appling will be the league’s No. 2 seed for the state playoffs. The Pirates had the lone league loss to the Bears while Liberty fell to both Pierce and Appling and will be the No. 3 seed.

Tattnall will be the league’s fourth seed.

The Herons finished their season with a victory over the Blue Tide in Nahunta.

The win was the first for Brantley in Region 2-3A after it had lost to all four teams who are going to the playoffs from the region.

Long did not win a game all season and scored only 48 points in their 10 games.

The Buccaneers were blanked on the scoreboard in Wrightsville in their final game of the 2018 campaign.

The Bucs finish 1-9. They won their first game of the season last week at Portal.