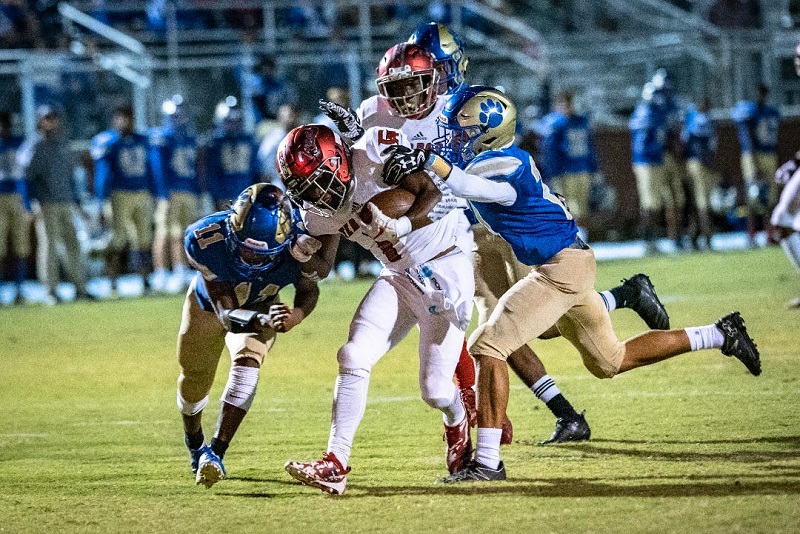 And both teams did more than win. They rolled to convincing victories in their season finales to clinch those championships.

The Red Terrors routed Bradwell Institute 42-21 at Olvey Field in Hinesville to lock up the Region 2-6A title in the Georgia High School Association. The region crown was the fourth in a row for the Terrors under head coach Rocky Hidalgo.

The Knights secured their third straight league title under coach Brandon Derrick with a 49-24 thumping of Bulloch Academy on the Gators’ home field in Statesboro in their Georgia Independent School Association matchup that decided the Region 2-3A crown.

With their win in Hinesville, the Terrors closed out the regular season with wins in all four of their region games and will take a 7-3 record into the state playoffs. Glynn will be at home next week against Evans in the opening round of the Class 6A playoffs.

“Our kids played hard tonight,” Hidalgo said. “It was probably our best game of the season.”

Mike Brinson – Glynn Academy players close in on Bradwell Institute running back Kevin Harris during action between the Red Terrors and Tigers on Friday at Olvey Field in Hinesville.

Senior quarterback Sam Wagner put Glynn up 7-0 in the first quarter with a 6-yard run, but Bradwell answered to tie the score early in the second quarter on a TD run by South Carolina commit Kevin Harris.

Glynn would close the first half with a 39-yard scoring pass from Wagner to TJ Lewis and another TD run by Wagner to finish out a late 59-yard march by the Terrors.

The Terrors continued to pour it on in the third period when Lewis scored on a 1-yard run and Quantavious Bostic dashed 15 yards for a touchdown that made it 35-7.

The Tigers punched in a touchdown early in the fourth, but Glynn quickly answered with a scoring run by Caden Hutchinson to make it 42-14.

The Tigers did add one last touchdown before the end of the game to make for the final tally.

With Effingham also topping Richmond Hill in the other region game Friday, Effingham, Richmond Hill and Bradwell all finished with 2-2 league records.

Effingham won the tiebreaker, which is fewest points allowed in games between the tied teams, to claim the No. 2 seed for the playoffs. Richmond Hill defeated Bradwell in their head-to-head meeting, thus the Wildcats will be the region’s third seed with the Tigers going to the playoffs as the fourth seed.

In GISA, Frederica (7-3) and Bulloch (8-2) were both 3-0 in region play going into their meeting Friday night.

The Knights had lost to the Gators on their last two trips to Statesboro to play their region rival, but the Knights weren’t to be denied this time as they dominated the home squad once they got going.

Bulloch drove the ball deep into FA territory on the game’s first possession while chewing up the first eight minutes before missing a field goal after the Frederica defense buckled down and forced the attempt.

The Knights would drive for a touchdown on their first offensive series with senior quarterback and Auburn commit Jaylin Simpson scoring from 6 yards.

Frederica would go up 14-0 early in the second period on a 13-yard scamper by Isaiah Jackson.

That would stand as the halftime score.

The Knights quickly blinked the scoreboard after halftime when Denver Anthony raced 60 yards for a touchdown on the first offensive snap of the third period.

Bulloch then put itself in a bind when it fumbled deep in its territory with the Knights recovering the loose ball. The Knights would score off the miscue when Anthony sped 28 yards to paydirt to make it 28-0 less than a minute into the second half.

Frederica made it 35-0 when Simpson scored from 22 yards with seven minutes still to play in the third.

Bulloch would get on the board late in the quarter with its first TD of the game, but the Knights quickly answered with a 34-yard scoring jaunt by Jackson to open the fourth quarter.

The teams traded touchdowns again with Bulloch scoring before Simpson added his third rushing TD for a 49-14 lead for the Knights.

Bulloch would score a touchdown and a field goal in the final moments to make for the final score.

As the region winner, the Knights will get a bye in the first round of the state playoffs next week. They will host a second-round game on Nov. 16.