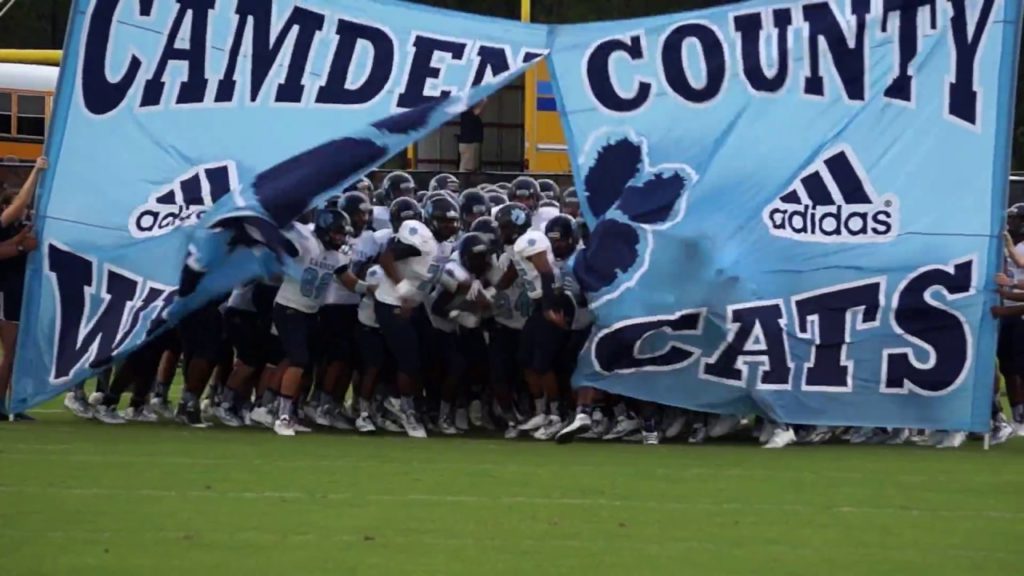 Camden County appears to be on an early-season roll.

The Wildcats certainly rolled Friday night once they got going offensively as they won 33-6 at Richmond Hill for their third win of the season and their first on the road in two tries.

The loss was the second in a row for Richmond Hill as the black-and-gold Wildcats fell 23-21 last week at Wayne County after opening the season with a win on the road at Grovetown.

Richmond Hill scored first in Friday’s Wildcat Fight on a 37-yard field goal late in the opening quarter, but Camden would answer that score when Jalen Davis sped 47 yards on a fake punt to put the blue-clad Cats on top.

Richmond Hill got a second field goal from 28 yards by Anthony Salazar in the first half, but the home team would not score again.

Camden went up 13-6 before halftime on a 28-yard pass from Logan Watson to Logan Berryhill following a blocked punt in Richmond Hill territory.

Camden would make it a two-score game some five minutes into the third period on a scoop and score by Cade Loden that covered 50 yards.

The visitors broke open the game with two fourth-quarter scores, the first a 36-yard run by Caleb Keaton with seven minutes to play which was followed by a 62-yard scoring jaunt by Daryl Williams that punctuated the Camden win.

Luke Carter was 15-of-33 for 175 yard passing for Richmond Hill, but he was picked off twice.

The home team’s leading rusher was Jalen Rouse who carried 15 times for only 31 yards.

Richmond Hill lost superstar Aaron Bedgood to an injury late in the first quarter. He was on crutches as he watched the rest of the game from the sideline.

The Cats from Kingsland will visit Glynn County Stadium to play Brunswick next Friday. Richmond Hill will host New Hampstead.

The Yellow Jackets tuned up for next week’s showdown with Glynn Academy with a big win in the Palmetto State on Friday.

All 42 of the game’s points were scored before halftime.

Wayne standout running back MJ Fuller had a huge night for the Jackets, going for 176 yards before halftime and finishing with 196 for the game.

He scored twice including a 73-yard run.

The Jackets’ starting quarterback, Shamar Taylor, left the game with an injury in the first quarter and did not return.

Senior Ashby Cribb filled in at quarterback after that and ran for a touchdown while also throwing a 26-yard TD pass to senior tight end Ty Anderson.

Wayne linebacker Griffin Boykin intercepted a pass, recovered a fumble and also forced a fumble. He made all three plays in the second half.

The Jackets will host Glynn next Friday in Jesup. Wayne is the top-ranked team in the power rankings and the Red Terrors, who were off this week, are ranked second after being the preseason No. 1 team before losing their opening game at home to Fort Dorchester (S.C.).

The Bears posted a third consecutive shutout Friday night as they moved to 4-0 for the season.

Randolph-Clay (0-3), which has yet to score in 12 quarters, dressed only 28 players for the game in Blackshear.

The first-team players for the Bears only played two series in the game, and the Pierce varsity defense has still not been scored on.

The Red Devils managed only 77 yards and two first downs for the game.

Pierce piled up 303 yards with mostly freshmen and sophomores doing the work.

The leader rusher for the Bears was sophomore Maleek Chandel who carried for 92 yards.

The Bears will be off next week before playing at South Effingham in two weeks.

The Gators bounced back from last week’s loss to rival Coffee with a double-digit win over the Cardinals.

Ware improved to 3-1 with the win while the Cardinals dropped to 2-2.

This was the first-ever meeting between the Gators and Cardinals. Ware entered the week ranked ninth in the state in Class 5A according to the Atlanta papers.

Jonesboro did not score until the fourth quarter.

Ware will have next week off, giving the Gators two weeks to prepare for rival Glynn Academy which comes to Waycross on Sept. 21.

The Herons couldn’t stop the early-season momentum created by the Yellow Jackets who won for the fourth time in as many weeks to start the season.

The Herons led 22-21 after three quarters on Friday night, but couldn’t slam the door on the Jackets who scored twice in the fourth quarter to win coming from behind on a muggy night in Hazlehurst.

Brantley is off next week and will play a fourth straight road game at Berrien in two weeks.

The Pirates lost a defensive battle on the road in Eastman on Friday as the hometown Indians improved to 3-0 with the win.

Appling fell to 1-2 in its first season under veteran coach Rick Tomberlin who graduated from the Baxley school.

Dodge is ranked sixth in the state in Class 2A. The Indians also own wins over Bradwell Institute (23-15) and West Laurens (22-10).

Friday’s game was tied 7-7 at halftime, but the Indians scored the only points of the second half when Erin Pitts scored from 4 yards to finish off a 66-yard drive by the Indians after their defense forced a turnover on downs on their side of the field.

The Pirates drove inside the Dodge 5-yard line in the final minutes, but again the Indians stopped them and got the ball back on downs to protect their lead.

Appling will host Cook next week.

The Panthers rebounded from a loss last week at Statesboro with a home win over Evans.

And, it was Kris Coleman leading the way for the Panthers once again.

Coleman ran for 267 yards and two touchdowns on 20 carries to pace the Liberty win.

He scored the Panthers’ only touchdown last week in their 23-6 loss to the Blue Devils.

In Liberty’s opening game, the senior ball carrier rushed for more than 300 yards to lead the team’s 40-17 victory over rival Bradwell Institute.

The Panthers will play host to Cross Creek next week.