The Brunswick High Pirates suffered through a frustrating night Friday as they fell to the Camden County Wildcats 37-0 in a non-region game at Glynn County Stadium. 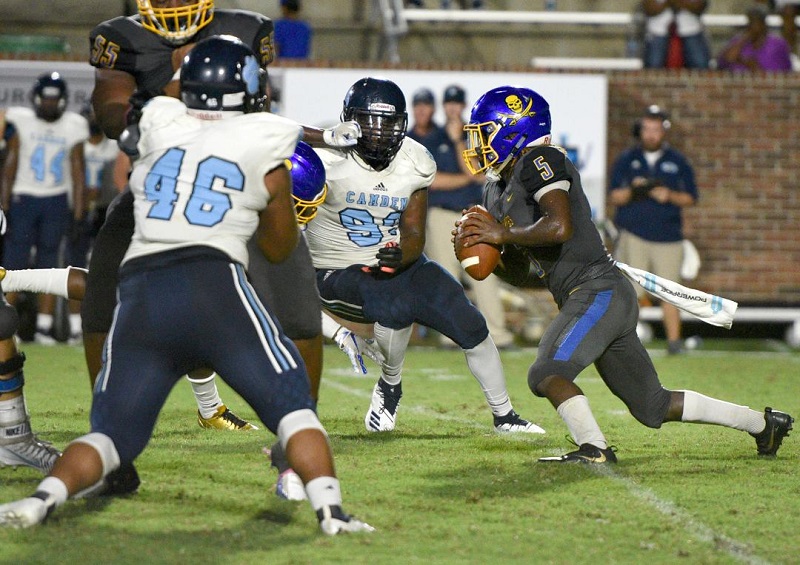 The Brunswick High Pirates suffered through a frustrating night Friday as they fell to the Camden County Wildcats 37-0 in a non-region game at Glynn County Stadium.

And, the look on the face of Brunswick coach Sean Pender after the game actually said it all. But, then came his comments.

“They didn’t do anything we didn’t think they would do,” the BHS coach said. “We got our butts whipped up front physically. Their nose guard beat us all night, and because of that, we were almost one dimensional throwing the ball and we just couldn’t get the job done.

“We didn’t execute the game plan, whatsover. The offense went three and out to much, we got poor quarterback-play and our receivers didn’t make plays when we had an opportunity.

“We didn’t cross the 50-yard line in the first half. Our defense played well for a half, but we kept giving them a short field and the defense wore down.”

The coach on the other side of the field was much happier. As he talked to reporters, Camden head coach Bob Sphire was praising his players and coaches for a job well done.

“We weren’t focused early on, but I thought we took off in the middle of the second quarter, and I think our strength and conditioning really showed up,” Spire said after watching his team dominate the game in the trenches.

The shutout was the first for the Wildcats since their 10-2 season in 2015 when they blanked Wayne County 42-0 in the fifth game on the schedule. That was also the last winning season for the Wildcats who won two and three games, respectively, the next two years.

Camden is now 4-1 this season, their second under Sphire.

Brunswick (1-3) has now lost three of its first four games. The Pirates had not been shut out since losing 28-0 to rival Glynn Academy in the second game of the 2015 season.

Also, a Sean Pender-coached team had not been shut out since the 2015 season when his Pierce County team lost 47-0 to Cedar Grove in a first-round state playoff game.

A hustle play late in the game by Camden’s Roninn Wright preserved the shutout when he stripped a BHS receiver of the ball at the goal line after an 87-yard pass play. The loose ball got picked up by the Wildcats in the end zone to keep Brunswick off the scoreboard.

“What a high-character play that was,” Sphire said. “I think that showed a lot about our team and how far we’ve come. Ronnin could have easily quit on the play, but he didn’t.”

The Wildcats avenged last year’s loss to the Pirates in Kingsland with Friday’s convincing win. Last year’s win for the Pirates was the team’s only one over Camden since the 1999 season.

Brunswick ran for more than 250 yards against Camden last year, but on Friday night, the Pirates could muster only 58 yards on the ground.

The Pirates finished with 167 yards passing and 225 total yards.

The Wildcats’ first points came on a 30-yard field goal late in the first period.

Camden would score its first touchdown in the second quarter following a punt that pinned BHS inside its own 5-yard line. After Brunswick went three-and-out, the Wildcats needed just four plays to score from 25 yards as Daryl Williams ran the final 3 yards for the touchdown that gave the visitors a 10-0 cushion.

With 1:12 left to go before halftime, the Pirates elected to try for a first down on a fourth-and-2 play from their own 43, but the Wildcats stuffed Brunswick quarterback KJ Lee for a loss on a keeper and took over on downs.

Camden would score in one play as quarterback Logan Watson scrambled and threw on the run. His pass was deflected into the arms of Logan Berryhill who turned and ran to paydirt for the 39-yard score that gave the Cats a 16-0 lead at intermission.

The third quarter started with a Brunswick interception that gave Camden the ball at the BHS 29. Camden would score in four plays on a 13-yard pass from Watson to Caleb Keaton for a 23-0 lead.

Before the end of the third, the Wildcats got a 43-yard run from Jamie Felix that finished off an 86-yard march and blinked the large stadium scoreboard to 30-0.

In the final stanza, which was played with a running clock, the Wildcats chunked a 34-yard pass for a score that involved Watson and Berryhill once again to make for the final tally.

Watson, a junior, was 8-of-13 passing for the night with three touchdowns. Berryhill, a senior and a South Florida commit, finished with four catches for 102 yards and two touchdowns.

“He called a good game. He came up with some good stuff, and we didn’t execute it early, but he stayed with the things he prepared and we eventually did a better job.”

Camden is off next week and hosts Glynn Academy in two weeks. Brunswick will be at home again next Friday against New Hampstead.

In other games involving high school teams from Glynn County, the results were as follows:

The Yellows came out on top in the battle between the top two teams in the Southeast Georgia High School Football Power Poll by AllOnGeorgia.

Playing at Jaycee Stadium in Jesup, the Jackets broke a 14-14 deadlock at halftime with two quick scores to open the third quarter and then used a ball-control offense and a run-stopping defense to finish off the Red Terrors.

“Wayne County has a good football team. There is really no shame in losing to those guys,” said GA coach Rocky Hidalgo who saw his Terrors fall to 2-2 on the year.

“Our kids played hard tonight. I’m not gonna fault them. They know we’ve got issues to fix. We’ve got work to do, but I still think we’re gonna have a football team at the end of the year that people will be proud of.”

It looks like the Jackets might too as they are now 4-0 for the season and will keep the No. 1 spot in the power poll which they claimed after Glynn lost its opening game while starting out with the top ranking in the preseason.

Wayne senior running back MJ Fuller raced 80 yards for a touchdown to start the second half to give the Jackets the lead for good.

Wayne would score again after its ensuing kickoff hit a Glynn up-back and the Jackets recovered. Ashby Cribb, a receiver and backup quarterback, scored from 2 yards out to close out a 39-yard drive by the home squad.

The first half started about the same way as the Jackets scored on a short run by Cribb to open the game, and after Glynn fumbled the kickoff, the Jackets got a 12-yard scoring pass from Shamar Taylor to Cribb for a quick 14-0 lead.

The Terrors would battle back to tie the game as they scored on their very next drive off a 35-yard pass from TJ Lewis to Jaiden Miller to cut their deficit in half.

Two drives later, Lewis scored from 4 yards to pull the Terrors even before the half following the extra-point kick.

For the game, the Jackets finished with nearly 300 yards rushing. Fuller did most of the damage with 222 yards on 21 carries.

The Wayne defense stymied Glynn’s ground-and-pound offense, checking the Terrors to 80 yards rushing and harassing the quarterback most of the night.

“We knew we might struggle to run the ball. We had to do some things left-handed on offense,” Hidalgo said.

Hidalgo had been 4-0 against the Jackets prior to last night’s defeat.

Glynn will try to come off the mat next week when it visits rival Ware County.

The Knights won for the third straight week, scoring all but three of their points before the halftime break.

Isaiah Jackson scored three times in the first half for Frederica with two touchdown runs while also returning Augusta Prep’s kickoff 75 yards after its only score before intermission.

Also for Frederica (3-2), Denver Anthony threw a pair of scoring strikes – one to Jashawn Sheffield and another to Jaiden Rose-Scalley.

Sheffield also scored running from 18 yards out after the Knights forced a turnover.

Augusta Prep (0-4) scored a second time in the fourth quarter. The Knights’ only points in the second half which included a running clock was a 35-yard field goal by William Brock.

The Knights will be off next week.