Georgia Southern to play in second-ever bowl game on Saturday 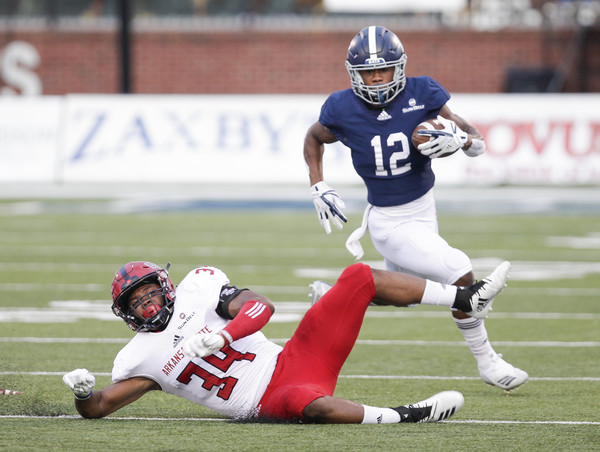 The college football bowl season will kick off Saturday with the first six games on the 41-game docket.

One of Saturday’s games is the Camellia Bowl in Montgomery, Ala.

This might not excite you, but it is a big deal for Georgia Southern.

The 5:30 p.m. game that will be nationally-televised by ESPN is just the second-ever bowl game for the Eagles who have only been playing in the Football Bowl Subdivision since the 2014 season.

Georgia Southern played in its first bowl game at the end of the 2015 season when it was invited to the GoDaddy Bowl and pounded Bowling Green.

And when the Eagles take the field Saturday against Eastern Michigan at the Cramton Bowl – site of the old Blue-Gray Game – they will have a chance to add to their rich football history.

With a victory, the Eagles (9-2) can finish off their first 10-win season as an FBS program. So, for them, that is really all the motivation the Eagles needed to get themselves ready for Saturday’s game.

“We are honored to be invited to the Raycom Media Camellia Bowl,” said Georgia Southern head coach Chad Lunsford. “To compete in a bowl game for the second time is really a big thing for our program.”

Georgia Southern finished just 2-10 last season, the worst record in program history. This year, the Eagles have turned around their fortunes under Lundsford who took over as interim coach late last season before being named full-time head coach shortly after the 2017 season.

The signature win for the Eagles this season was their 34-14 victory over Sun Belt Conference champion Appalachian State.

Eastern Michigan enters Saturday’s game with a 7-5 record which included a 5-3 mark in the Mid-American Conference.

The biggest for these Eagles this season was their 20-19 victory at Purdue from the Big Ten in early September. Of course, the Boilermakers would pull off a big upset later against eventual Big Ten champion Ohio State. It was this loss that kept the Buckeyes out of the College  Football Playoff for the 2018 season.

This will be the third bowl appearance for the Eastern Michigan. The Eagles defeated San Jose State 30-17 in the 1987 California Bowl and fell 24-20 to Old Dominion in the 2016 Bahamas Bowl.

Eastern Michigan is familiar with Georgia Southern’s triple-option offense. The Eagles lost 37-22 this season to Army which runs a similar style offense.

Georgia Southern is perfect when it wins the rushing battle against the opponent. The GSU Eagles are 9-0 when they run for more yards than their opponent, but are 0-3 when they are outgained on the ground.

Georgia Southern’s Wesley Fields needs only 41 yards to eclipse the 1,000-yard rushing mark for the Eagles. He has three 100-yard games this season including the last two when he carried for 148 and 151 yards.

Georgia Southern has committed just five turnovers this season. The NCAA FBS record for fewest turnovers in a season by any team is eight which has been done six times.

Georgia Southern also has not thrown an interception this season in 110 passing attempts. The Eagles have completed 66 passes including 10 for touchdowns.

Eastern Michigan has actually thrown only four interceptions itself this season which is the second-lowest mark by any team behind Georgia Southern.