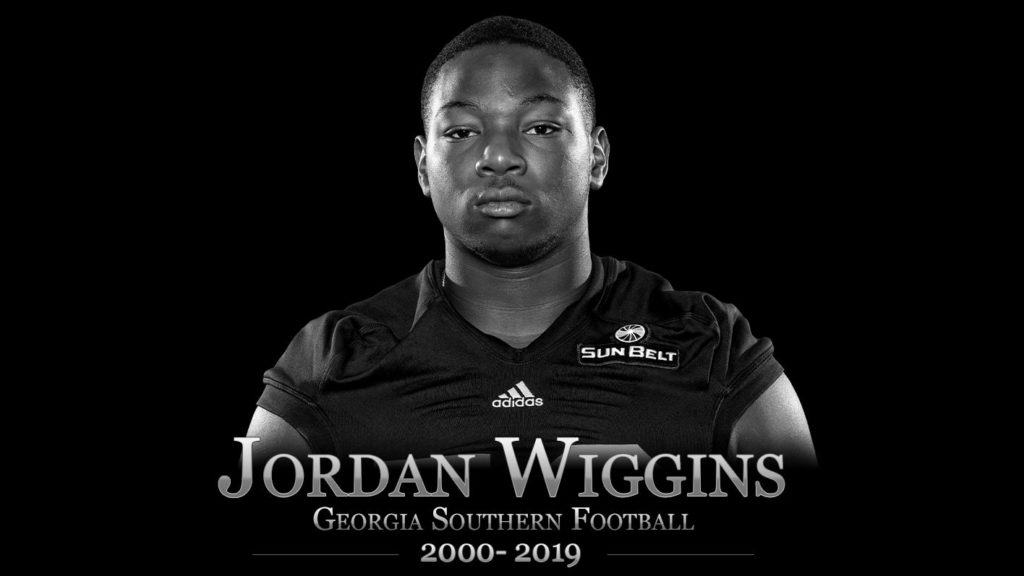 STATESBORO – On Monday evening, a family member called Georgia Southern Police to request a welfare check at Jordan Wiggins’ residence hall in Statesboro. Upon arrival, officers found Wiggins unresponsive. He was transported to East Georgia Regional Medical Center, where he later passed away.

Per university protocol, when a student death occurs, the Georgia Bureau of Investigation was called in to conduct an investigation. While no results are yet available, authorities did indicate that no foul play is suspected at this time.

Wiggins is a freshman football player on the Georgia Southern football team, and the news of his death hit his teammates hard. Monday was a scheduled day off from practice for the team, and Tuesday’s practice has been canceled.

“We are devastated to learn of Jordan’s passing,” said director of athletics Tom Kleinlen. “Although he has only been on campus for a few months, Jordan has left an indelible mark on our program. He was a great person, a great teammate and a great friend to the entire Georgia Southern community. Our deepest condolences and heartfelt thoughts go out to the Wiggins family, and all those who knew and loved Jordan.”

Wiggins played at Godby High School in Tallahassee, Florida, and was named to the All-Big Bend first-team by The Tallahassee Democrat. He was also named the WTXL Scholar-Athlete of the Week as well as the Capital Outlook’s Youth of the Year for his work on and off the field.

The offensive lineman signed with Georgia Southern in December of 2018 as part of the Class of 2019 and was scheduled to redshirt this season. He has not played in any games thus far in 2019.

“My heart is broken for Jordan, his family, our team and this university,” said head coach Chad Lunsford. “Jordan was a great Georgia Southern Man with a bright future. His time on Earth was short, but we know that there is a greater plan, and we must trust that. If he was indeed struggling with some personal issues, I wish the resources that we currently provide our students could have helped more. Our thoughts and prayers go out to everyone this is affecting.”

Counseling support and other resources are available to all Georgia Southern University students, student-athletes, faculty and staff. Screening Hours at the Counseling Centers on the Statesboro campus and Armstrong campus are 9 a.m.-12 p.m. and 1-4 p.m. The Counseling Center may be reached at 912-478-5541 on the Statesboro campus or 912-344-2529 for the Armstrong and Liberty campuses. After Counseling Center hours, or at any time if you feel someone you know may be considering suicide, contact University Police at 912-478-5234. The National Suicide Prevention Lifeline is 1-800-273-8255. The National Crisis Textline is text “HOME” to 741741.