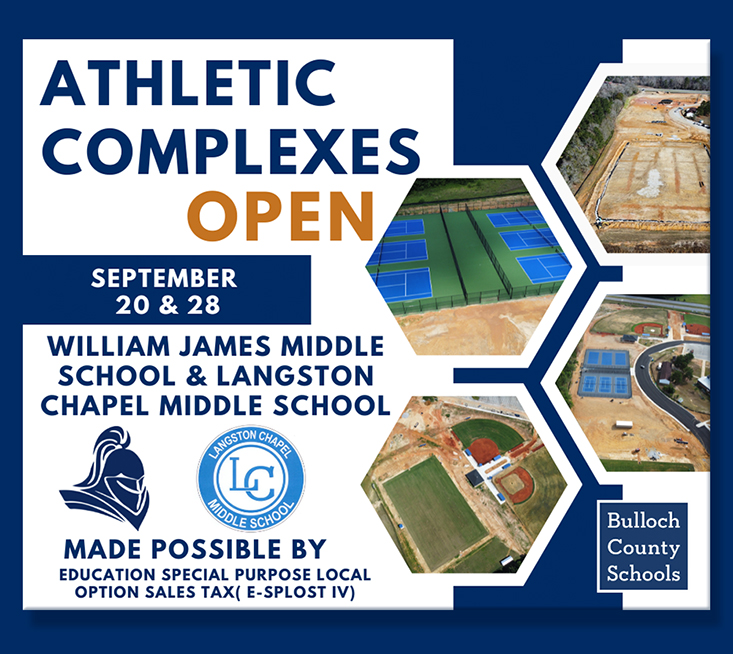 Two of Bulloch County Schools’ middle schools are set to host grand opening ceremonies for their new athletic complexes after 13 months of construction.

William James Middle School’s and Langston Chapel Middle School’s administrators, athletic directors and coaching staff are eager to showcase their facilities on September 20 and 28, respectively. The new $5.25 million complexes were designed by Hussey Gay Bell Architecture and built by Dabbs & Williams General Contractors, both of Statesboro.

“It is a beautiful thing to walk out of our school building and walk right to practice,” said William James’ head softball coach, Stephanie Mackiewicz, who also teaches seventh grade Social Studies. “We are very grateful to the community and all involved for our new athletic facilities.”

“This athletic complex means the most to our coaches, athletes, and parents,” said Laura Stuart, Langston Chapel’s head softball coach and a seventh grade mathematics teacher. “Having our own complex has aided in our athletes being able to practice and prepare. It has also contributed to a larger turn out at events amongst both parents and students.”

LCMS’s softball team was able to play all of its home games at the new complex this season, which began in August.

“We are so excited for all that will take place at this athletic complex for years to come,” Stuart added.

Mackiewicz, also spoke of the impact to the WJMS softball team, who is wrapping up their first season on the new home field.

“We have had more fans this year than in any other year I have been involved,” Mackiewicz said. “This is partly due to the fact that other WJMS athletes are able to leave their practices on campus and walk over to support their fellow classmates. This makes my players feel very supported and encouraged.”

She also shared that having facilities on campus is saving on transportation costs and practice time.  The school previously used Statesboro High School and Bulloch County Parks & Recreation facilities for its teams’ games and practices, which required athletes to be transported by school bus.

“Having a home field gives us a sense of pride and ownership, and our student athletes have had some extra responsibilities this year with helping to maintain our pretty field,”  Mackiewicz added.

Brian Hall, a WJMS health and physical education teacher, who also serves as the school’s head tennis coach is also excited for his players to have their own courts.

“They (courts) are really nice, and it is something of which our players and school can be proud,” Hall said. “With the courts being here, students miss less class time, and we have more practice time since we don’t have to take the bus to Mill Creek (Regional Park). I feel like with the courts being on campus, more teachers and students will be able to come to the matches which will increase our school spirit.”

Middle school athletic facilities were a priority item identified by both the Board of Education’s Education Special Purpose Local Option (E-SPLOST) and Facilities committees. The community committees met to review and prioritize a proposed list of projects to guide the use of the funds generated by the education special-purpose local option sales tax for capital improvements.

E-SPLOST V Referendum to be on Nov. 8 Ballot
Registered voters in Bulloch County approved in a special election on Nov. 7, 2017, a fourth one-cent sales and use tax for educational purposes for five years beginning Jan. 1, 2019. E-SPLOST IV was originally projected to run through December 31, 2023, and raise approximately $51 million for capital improvement projects like these; however, with the strength of local sales tax collections, the school district anticipates that it will reach the $62 million collection ceiling around June 2023. The Board of Education voted in July to place an E-SPLOST V referendum on the November 8 ballot which if approved, would extend the current one-cent sales tax for five additional years.