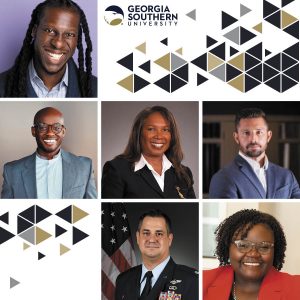 Georgia Southern University has invited six distinguished Georgians to Speak at the upcoming Spring 2021 Commencement Ceremonies. The speakers have backgrounds in medical, military, education, pro athlete performance training, and acting. The ceremonies will be held on May 8, 10, 11, 12, and 13.

The University will hold six commencement ceremonies for a mix of undergraduate and graduate students from each of the University’s 10 colleges. The commencement ceremonies on May 8 will be held at the Savannah Convention Center at 10 a.m. and 3 p.m. for undergraduates and graduates from each of the University’s three campuses who prefer to attend a ceremony in Savannah. The remaining four ceremonies will take place at Allen E. Paulson Stadium on the Statesboro Campus on May 10, 11, 12 and 13 at 9 a.m.

Each ceremony will be livestreamed to the commencement page on the University’s website and the Georgia Southern Facebook page.

Saturday, May 8, 10 a.m.
Undergraduate and graduate ceremony in Savannah – College of Arts and Humanities, Parker College of Business, College of Education, College of Science and Mathematics, College of Behavioral and Social Sciences and Allen E. Paulson College of Engineering and Computing

Dr. Annette Rainge (’83) is the 152nd president of the Georgia Dental Association (GDA), the premier professional organization of dentists in the state committed to improving oral health.

Rainge received a bachelor’s degree with a pre-dental track at Georgia Southern. During that time, she received numerous awards for her service in the community as a member of Delta Sigma Theta Sorority and attended Harvard University’s Health Professions Program. She completed dental school at the Medical College of Georgia School of Dentistry.

A member of the GDA for 30 years, Rainge is the first Black female president of the association, and has been recognized by both the Georgia Senate and the House of Representatives for achieving this historical feat. She has held multiple leadership positions at the state and local level and is a past recipient of the GDA’s Honorable Fellow Award, Eastern District Dental Society President Award, GDA’s Council on Dental Health Committee of the Year Award and Augusta Dental Society President Award.

Rainge is involved in many charitable endeavors, including free dental screenings during Children’s Dental Health Month, free health screenings throughout the community, Georgia Mission of Mercy events, back-to-school drives and the Pampered Smiles Project, which provides free dental care for victims of domestic violence. In 2018, she received the Dr. Martin Luther King Jr., Dream Keeper Award for her many contributions to the community.

Rainge has practiced in the Augusta area for 30 years and is a general dentist at Rainge Family Dental, PC.

Saturday, May 8, at 3 p.m.
Undergraduate and graduate ceremony in Savannah – Waters College of Health Professions and Jiann-Ping Hsu College of Public Health

Rahman Anjorin (’09) is a sports professional, life skills coach, educator, author and speaker who has spent his life training and developing leadership skills to help others reach their full potential. Currently, he is a Player Manager in the Player Affairs Department with the National Football League (NFL) Players Association where he oversees the continuing education of the NFL’s active players, the onboarding of rookie players and self-investment resources to help initiate transition strategies. Additionally, Anjorin is owner and lead consultant of D.E.E.D Consultants, encouraging athletes to explore personal and professional goals and growth.

Previously, Anjorin served in various positions with The Ultimate Fighting Championship, the Kansas City Chiefs, the Professional Association for Athlete Development and New Mexico State University. As a McNair Scholar at Georgia Southern, Anjorin earned a bachelor’s in exercise science, followed by a master’s in sports business management and an MBA from the University of Central Florida. At present, he is pursuing a Ph.D. at the University of Idaho in the Adult, Organizational Learning and Leadership Program.

Monday, May 10, at 9 a.m.
Undergraduate ceremony in Statesboro – College of Arts and Humanities, Waters College of Health Professions and Jiann-Ping Hsu College of Public Health

Triple Eagle Ben Freakley (’00,’03,’12) is head of mental performance for the Toronto Blue Jays Major League Baseball team. He is a Certified Mental Performance Consultant through the Association for Applied Sport Psychology and is a member of the Professional Baseball Performance Psychology Group.

For more than 20 years, Freakley has helped individuals, athletes, teams, soldiers and businesses look at ways to perform better. He is the founder of Ready. Set. Resilient., which provides high-performance coaching for individuals and teams. He has been a soccer coach at the Player Development League and NCAA Division I level, national staff instructor for United Soccer Coaches, mental performance coach for special operations forces and a general manager for a sports club with more than 1,100 members. Freakley has consulted with more than 20 NCAA teams, sport clubs, military units, legal professionals and business leaders on the psychology of performance, leadership, culture and team dynamics.

Freakley earned a bachelor’s degree in public relations and master’s degrees in sport psychology and sport management from Georgia Southern. He was a member of the Eagles men’s soccer team, and later served as an assistant men’s soccer coach for the Eagles for six seasons. He is currently pursuing a doctoral degree in sport and performance psychology with an emphasis in clinical mental health counseling.

Tuesday, May 11, at 9 a.m.
Undergraduate ceremony in Statesboro – Parker College of Business, College of Education and College of Science and Mathematics

A decorated officer, Lt. Col. Gutierrez received his commission from Officer Training School at Maxwell Air Force Base in Alabama in 2006. He held flying tours in both the E-8C JSTARS and E-3B/C/G Airborne Warning and Control System and has participated in numerous contingency operations around the world and six deployments. Prior to his current assignment, he was Director of Operations of the 16th Airborne Command and Control Squadron.

In 2019, Lt. Col. Gutierrez became a National Security Fellow for the Foundation for the Defense of Democracies in Washington, D.C. He earned a bachelor’s in biology from Georgia Southern, a master’s in operational warfare from Air University and was a distinguished graduate from the United States Air Force Weapons School.

Wednesday, May 12, at 9 a.m.
Undergraduate ceremony in Statesboro – College of Behavioral and Social Sciences and Allen E. Paulson College of Engineering and Computing

Based in his hometown of Atlanta, Georgia, Louder recently wrapped filming the Netflix project, “They Cloned Tyrone,” starring Jamie Foxx. He also served as the voice of Adidas’ “Sports Needs Creators” national campaign and starred in the Bollywood film, “Simran.”

With more than 30 stage productions and 40 independent film projects, including full-length features, film shorts and a web series, under his belt, Louder earned a Best Actor Award at the 2017 Constellation Film Festival for his role in the sci-fi film, “Pony.”

As a storyteller, Louder continues to appear as one of his most coveted characters, “Babatunde the Griot,” inspiring thousands of students throughout the state of Georgia. He is also a youth acting instructor at AGI Entertainment.

Louder graduated from Georgia Southern with a bachelor’s in sociology.

Thursday, May 13, at 9 a.m.
Graduate ceremony in Statesboro

Jackson was the first female Dean of Students in the history of Georgia Southern, responsible for creating V.A.L.U.E.S., a civility initiative rooted in responsible decision-making. She also assisted in building the new Division of Students Affairs at the University.

In 2018, she was named Vice President for Student Affairs and Dean of Students at Albany State University where she worked diligently to bridge the gap between the classroom and co-curricular experiences by creating partnerships between Academic Affairs and Student Affairs.

Jackson also founded EduCare Training and Consulting, LLC, out of a passion for equipping and supporting those who do their work as a calling, and serves as host of the podcast, “Heart Work with PBJ.”

She earned a Bachelor of Science in sociology and a Master of Arts in counseling before pursuing a Doctor of Education from Georgia Southern.