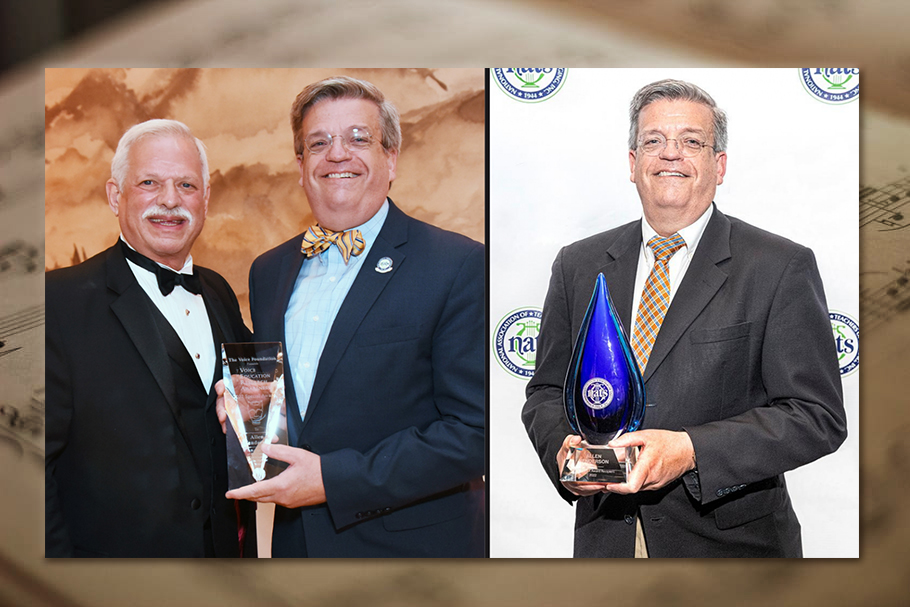 Allen Henderson, D.M.A., professor of music in the Fred and Dinah Gretsch School of Music at Georgia Southern University, has been recognized by two national organizations for his significant role in the voice industry. / GSU

Allen Henderson, D.M.A., professor of music in the Fred and Dinah Gretsch School of Music at Georgia Southern University, has been recognized by two national organizations for his significant role in the voice industry.

The Voice Foundation presented Henderson with the 2022 Voice Education Research Awareness (VERA) Award for his “outstanding contributions to the field of voice.” He received the award in Philadelphia as part of the foundation’s annual symposium. The award honors unique leaders who have enhanced appreciation for the human voice, and recognizes those who have a dedication to excellence, education or mentorship. The award also acknowledges role models in voice use and advancement.

The Voice Foundation praised Henderson’s efforts to integrate the worlds of voice science and voice pedagogy, and commended the way Henderson incorporated expert opinion and guidance into thoughtful policy decisions.

“I am honored and humbled,” Henderson said. “It was a total surprise for this distinguished body to recognize me for my work. Congrats to my fellow awardees rock legend Jon Bon Jovi, baritone Vladimir Chernov and Brazilian broadcaster William Bonner,  who have all given so much to the professional voice community.”

A month later, the National Association of Teachers of Singing (NATS) awarded Henderson the IMPACT Award for his exceptional and unwavering dedication to the organization, and for the significant impact his leadership, initiative and achievements have made on the association during its 57th national conference in Chicago. NATS is the world’s largest professional association of voice and collaborative pianists with more than 7,000 members in the United States, Canada and more than 35 other countries. Members represent all music styles and work in independent studios, community schools, elementary and secondary schools, higher education or in the medical field.

Henderson has been a major contributor to both the Voice Foundation and NATS for decades. In addition to his academic appointment, he has served as executive director of NATS since 2008, and prior to his current appointment, was involved with the organization for 15 years.