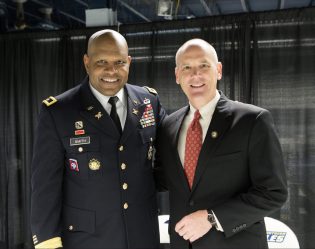 Lt. Gen. Leslie C. Smith, a distinguished Georgia Southern University alumnus, will serve as the W.E. Carter Chair of Leadership in the University’s Parker College of Business after finishing a 38-year Army career.

“Gen. Smith is a world-renowned leader who has invested much of his career in the development of others,” said Dean of Georgia Southern’s Parker College of Business Allen Amason, Ph.D. “We are incredibly fortunate he will be lending his experience and expertise to our college, our students and our community.”

Smith will hold the W.E. Carter Chair in Leadership and Business Administration, which was established in 1999 in honor of the late W.E. Carter Sr. and the late W.E. Carter Jr. The endowed position was created to support a faculty member of extraordinary accomplishment and ability, and with a strong commitment to teaching, lifelong learning, regional and economic development, and to positively impact the region served by Georgia Southern University.

“Georgia Southern provided that ‘special sauce’ that helped me become the leader I am today,” Smith said. “The University provided me the opportunity to meet my wife Vanedra, to become a commissioned officer and to join Kappa Alpha Psi. Without a doubt the blessings of attending Georgia Southern will continue for years to come.”

As the Carter Chair, Smith will focus on leadership development and education for students in the Parker College and at Georgia Southern, as well as for civic leaders across the state and region. He will serve as an ambassador for the College and for leadership education and development, while working with faculty and staff across the University to launch a sustainable leadership program that will accelerate the positive impact of the Parker College and the University. He will begin immediately.

“Gen. Smith has served this University with great distinction as one of the most involved and influential graduates of Georgia Southern,” said Georgia Southern University President Kyle Marrero. “This position is a natural next step for a leader of his caliber, and I look forward to working with him more frequently as we continue our mission of preparing the next generation to think, lead, teach and serve.”

During his career, Smith served in various command and staff positions. Of note, he served as a joint staff non-proliferation planner, and he commanded the 83d Chemical Battalion and the 3d Chemical Brigade. He deployed to the Middle East for Operations Desert Shield and Desert Storm, and to Iraq during Operation Iraqi Freedom.

As a general officer, Smith served as the Chief of the Chemical Branch and the Commandant of the Chemical, Biological, Radiological, and Nuclear School. He subsequently served as the Commanding General of the 20th Support Command – Chemical, Biological, Radiological, Nuclear and Explosives; and later as the Commanding General of the Maneuver Support Center of Excellence and Fort Leonard Wood, Missouri — the first Chemical Corps officer in either command position.

Additionally, he was the first Chemical Corps officer to serve as The Inspector General of the Army. He holds a Master of Science in administration from Central Michigan University, a Master of Arts in national security strategy from the National Defense University, and a Bachelor of Business Administration in accounting from Georgia Southern University.