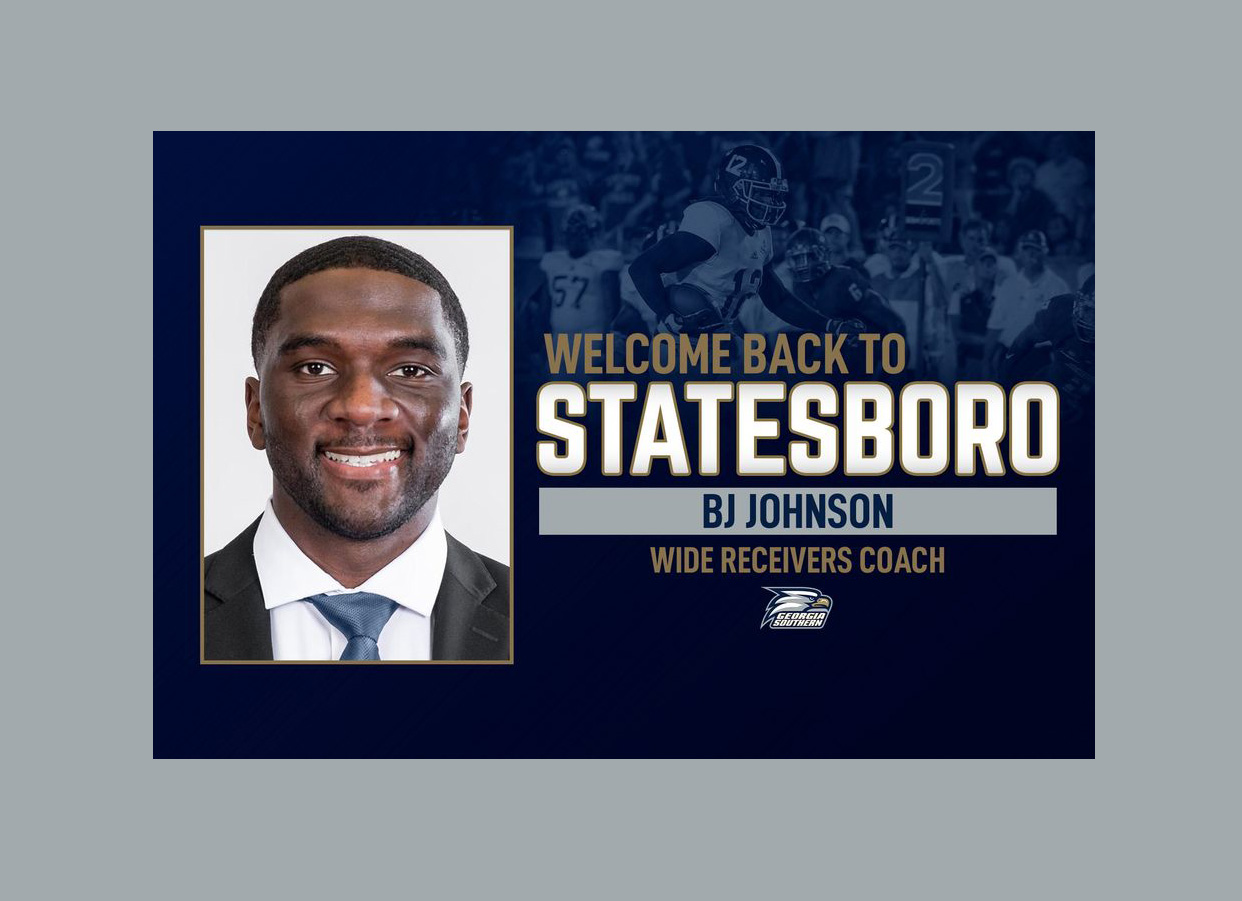 Former Eagle, BJ Johnson, is returning to GSU as the wide receivers coach:

BJ Johnson, who was one of the best receivers ever to play at Georgia Southern, has been named as the wide receivers coach for the Eagle football program as announced Friday by head football coach Clay Helton. Johnson comes to Statesboro after one season as an assistant coach at Gardner-Webb, where he had immediate success as an on-field coach.

“Word’s can’t describe how good it feels to be back home and to give back to a place that has given so much to me,” Johnson said. “I am excited to do everything in my power to serve Coach Helton and these young men every chance I get. Hail Southern and Go Eagles!”

“We are very excited to welcome back BJ Johnson to Statesboro,” Helton said. “Having spent time with organizations like the San Francisco 49ers, University of Colorado and Texas Tech University, BJ knows how to develop at the highest level, as evidenced by his helping Gardner-Webb to a Big South Conference championship this past season. Being an alumnus of Georgia Southern University and a native to the state of South Carolina, BJ knows our recruiting footprint. We look forward to continued success in our passing game and recruiting under Coach Johnson’s leadership.”

In his year at G-W, Johnson helped lead the Runnin’ Bulldogs to the program’s first title in 19 seasons as they advanced to the second round of the FCS Playoffs. A pair of Johnson’s receivers – TJ Luther and Cutrell Haywood – were both named first-team All-Big South honors while Luther was named a third-team All-American by Phil Steele.

Luther flourished under Johnson, hauling in 63 passes for 1,166 yards and eight touchdowns in 13 games – averaging 18.5 yards per reception. He had seven games with at least 100 yards receiving in 2022, paced by a five-catch, 188-yard outing at Coastal Carolina.

Luther, who is only the third receiver in the program’s Division I era to post a 1,000-yard season, accepted an invitation to play in the prestigious NFLPA Collegiate Bowl in advance of the NFL Draft. Haywood had a career-best year as well, catching 78 passes for 775 yards and seven touchdowns. He led the Big South in receptions and posted six of his seven touchdowns against Big South opposition.

Prior to his stint at Gardner-Webb staff, Johnson spent a season on the sidelines at Texas Tech, where he spent one year as an offensive graduate assistant with the Red Raiders’ inside receivers and tight ends. The Woodruff, South Carolina, native was part of an offensive staff that helped the program to seven wins and a 34-7 win over Mississippi State in the Liberty Bowl last season. Texas Tech averaged 416.4 yards of total offense per game and scored 30.3 points per game.

Johnson spent the 2020 season in the PAC-12 at Colorado, serving as a defensive graduate assistant. He helped the Buffaloes to a 4-2 record and a berth in the Valero Alamo Bowl during his time in Boulder. Prior to his move to the FBS ranks, Johnson spent the 2019 season at Division II Savannah State as the receivers coach. Johnson helped the Tigers to a 7-3 mark, which was the program’s first winning campaign in 22 years. Savannah State finished the 2019 season with a perfect 5-0 mark in the SIAC.

Johnson was a volunteer coach at Woodruff (S.C.) High, his alma mater, after a strong college career at Georgia Southern.

As a receiver for the Eagles, caught 93 balls for 1,338 yards and six touchdowns from 2013-2016, averaging 14.4 yards per catch for the Eagles. He helped Georgia Southern to a 2015 GoDaddy Bowl win over Bowling Green and was voted to the program’s 40th Anniversary Team as one of the four receivers to make the squad this past fall. He graduated with a degree in sport management from Georgia Southern in May of 2016.

After his college career, Johnson signed a free agent deal with the San Francisco 49ers and made the team before a hamstring injury on the first week of the 2017 regular season cut his career short.