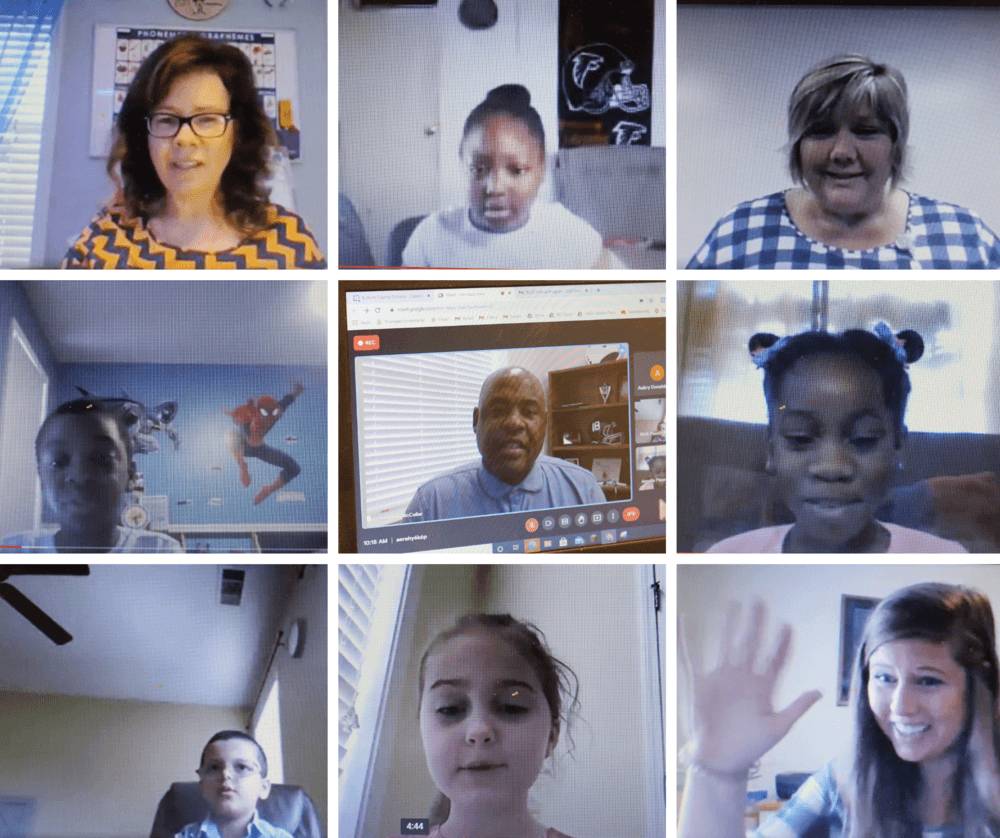 Speaking to a combined group of three classes from his office on Georgia Southern University’s Liberty Campus in Hinesville, where he serves as assistant director, Mayor McCollar thanked the students and teachers for inviting him to be part of their lesson.

“I’m super excited that I received an invitation,” he said. “Second grade was one of my better years,” he laughed.

“Our academic standards state that the students will define the concept of government and the need for rules and laws,” Brown said. “As well as being able to identify elected officials and where they work.”

Students had already learned about our nation’s president and our nation’s capital, Washington, D.C., our state’s governor and the state capitol in Atlanta, and about the mayor of Statesboro and City Hall.

“We wanted the students to meet the mayor since we have learned about what he does and where he works,” Brown shared.

Six students from the session’s 20 participating students asked Mayor McCollar questions about his role, and what led him to his position.

Gerrard, from Ms. Brown’s class, led off the question and answer session. “What made you decide you wanted to be the Mayor of Statesboro?”

“I was born and raised in Statesboro,” McCollar said. “I really, really love this city. But more than that, I really love helping people in the community. I have always been a community volunteer, so I wanted to increase my ability to help people. I saw the Mayor’s Office as an opportunity to help people within our community, so I decided to run for office.”

Kate from Ms. LaShoto’s class asked, “What is a typical day like for you as Mayor of Statesboro?”

“You know, I don’t know if there is a typical day. The reason why I say that is that the mayor does so many different things. A day may be for me to be at a business ribbon cutting. It may be me meeting with a group of doctors in regards to COVID-19. It may be me meeting with individuals in their neighborhoods discussing cutting grass and repairing ditches. So, it’s a whole host of things that your mayor may do.”

Mayor McCollar added, “I also have to represent the city outside of the city. I may be in Atlanta for a group of meetings for the Georgia Municipal Association, or I may be down in Savannah doing the same thing. A typical day for me means that I have to be prepared for pretty much anything. But, I will tell you this, the mayor has three jobs.  The first job is to be a representative of the city.  The second job is to be an advocate and tell people why they should support the city and address the city’s needs.  And the third and final job the mayor has is to be the defender of the city.  I think the best way to do that is that we are really having to defend our city against COVID-19. We have to take every measure to keep people safe.  A typical day can be anything under the sun, but at the end of the day, it goes back to those three jobs.

Ritik from Ms. Leggett’s class asked, “Please describe one tough experience you have had as mayor.”

Mayor McCollar shared about his experiences over the last 18 months during COVID-19. “This has been a very difficult situation in the sense that this is a virus that can make some people very, very sick.  Being able to balance and ensure our Moms and Dads have safe spaces to go to work in and that we have a safe community to be in and at the same time we are able to save lives.  We have to listen to experts. The difficult part is helping the greater community understand how serious this moment is that we are in.”

Aubry from Ms. Brown’s class asked, “What makes you proud of the City of Statesboro?”

“What makes me proud of the City of Statesboro is its people,” Mayor McCollar said. “It does not matter what we are going through or how difficult the time is, we rally around each other to support each other.  I cannot put into words, especially in these last 18 months, the amount of love, effort, and work that we’ve seen from everyday citizens.  I am most proud of Statesboro’s people.”

Amelia from Ms. LaShoto’s class asked, “Please describe one fun experience you have had as our mayor.”

Mayor McCollar shared a pre-COVID experience from a community event downtown. “There are a lot of fun experiences, but one of my favorites was in 2018.  We had a Downtown Get Down. We had a stage with several bands. Plenty of people were dancing in the streets. We had food trucks. It was a great moment. Great music, great food, great people all in a great city.  That was a lot of fun, and guys, I know it might not look like it, but the mayor likes to dance! That’s one of my favorite memories,” he laughed.

Taniyah from Ms. Leggett’s class asked, “If you were not the mayor of Statesboro, what would you like to do?”

“I’d like to work in a non-profit organization that focuses on economic development,” Mayor McCollar said. “I think that’s a big need in our community. I would focus on neighborhood revitalization and youth programming.”

In closing Mayor McCollar told the children, “Kids, keep listening to your teachers. Keep working hard in your classes, and know that anything that you want to do, you can do.  The sky is the limit for you. If you can dream it, you can be it.”

“You have inspired many of our students this morning,” Ms. Leggett said as she thanked the Mayor for his time.

“You are definitely a role model, especially with what we have been learning in our Social Studies unit,” Ms. LaShoto added.  “Boys and girls, if you have a desire to help others, you may want to be the mayor one day too.”

Thank you to Mayor Jonathan McCollar for taking the time to inspire our students. Our future leaders were very excited to hear him share his experiences.