Congratulations to these students and teachers! 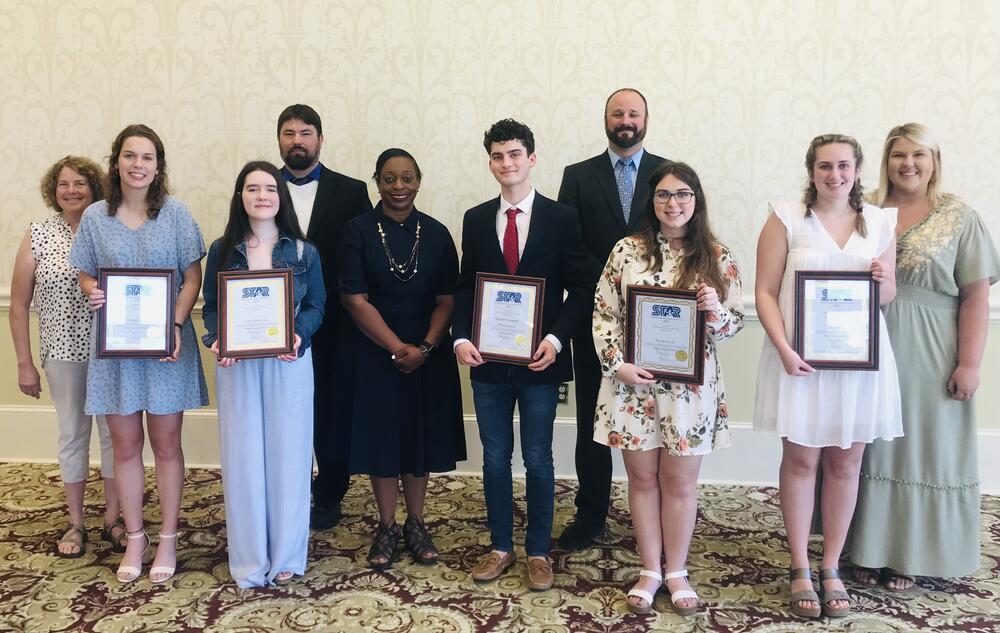 David Lippincott of Statesboro High School and his third-grade teacher, Estella Newkirt, were named as the 2021 Bulloch County STAR Student and STAR teacher. The pair will now advance to the Region 8 STAR competition, and possibly the Georgia STAR competition.

Newkirt, who is a 21-year veteran educator and currently a fourth-grade teacher in Burke County, taught Lippincott when he was a student at Julia P. Bryant Elementary School, and she was his math team coach in third, fourth, and fifth-grade. She is returning to Bulloch County Schools as a teacher this fall at Mattie Lively Elementary.

Lippincott, who is also Statesboro High’s salutatorian, plans to attend the Georgia Institute of Technology and major in mathematics. He credits Newkirt with instilling in him a passion for learning and math.

“David challenged me to bring my A game everyday,” Newkirt said. “His excellence made me study and be the best version of myself. David is extremely intelligent, but he never makes anyone around him feel small. That to me is another sign of his STARdom!”

Bulloch County Schools is the coordinating sponsor for the local Professional Association of Georgia Educators’ (PAGE) Student Teacher Achievement Recognition (STAR) program. The school district collaborates with the county’s five public and private high schools to honor students who achieve the highest single test score on the College Board’s Scholastic Aptitude Test (SAT), and who are in the top 10 percent or top-ten of their class. The Rotary Club of Statesboro and the Bulloch County Foundation for Public Education are underwriting sponsors for the local program as well.

Lippincott and Newkirt will advance to the Region 8 STAR competition, which includes STARS from high schools in 16 area counties. The Statesboro Exchange Club is the region sponsor. Due to COVID-19 there will not be a Region 8 banquet at Georgia Southern University this year. The Statesboro Exchange Club will announce the Region 8 STAR student and teacher on or after April 25. PAGE will host a virtual Georgia STAR event on May 17, for the 17 regional STAR winners from across the state. The state STAR winner will be announced at this event as well.

Thank you to these school administrators and counselors who encourage and support the academic growth and excellence of all students, including the STAR students.  Their service is invaluable to our community.

Congratulations to all of our county’s school-level STARS, their parents, and their STAR teachers from Bulloch Academy, Portal Middle High School, Southeast Bulloch High School, and Trinity Christian School:

Lillie Sumner – STAR Student: Lillie Sumner is the daughter of Phil and Hope Sumner. She plans to attend Georgia Southern University and major in chemistry. She hopes to become either a pharmacist or an emergency room doctor.

“I chose my STAR teacher, Courtney Burnette, because she is the reason that I love to come to school,” Sumner said. “She’s been a recommender of books and a suggester of songs since I was a sophomore. She has never stopped encouraging and believing in me and has always pushed me to be the very best I could be, in and out of the classroom.”

“I am so honored that Lillie Sumner chose me as her STAR teacher,” Burnette said. “I first got to know Lillie as her middle school cheerleading coach, and then a few years later she was in my tenth-grade English class. This is now my third year as her English teacher, and I can genuinely say that every minute has been a joy. Lillie is the rare student that just blows you away every day with her insight, her eloquent writing, and her maturity. It means so much to me that she valued her time in my class as much as I loved having her there!”

Madison Smith – STAR Student:  Madison Smith is the daughter of Chris and Sara Smith. She has been accepted to Georgia Southern University where she plans to major in Biology, with a focus on Conservation Biology and a minor in Environmental Science. Her goal is to become an environmental biologist and help companies become more eco-conscious and sustainable.

“I chose Mr. Gleissner as my STAR teacher because he is my band director, and he has taught me for six years,” Smith said.  “When I started middle school in Portal, it was a big adjustment. I moved here from a small town in Washington State. Mr. Gleissner and the band helped me feel more welcome and taught me how to be open to new experiences. He has helped me grow as a person. He has taught me life and leadership skills that I can apply to my life going forward.”

John Gleissner – STAR Teacher: John Gleissner is the director of bands for Portal Middle High School, where he has served for seven years.  He previously served for nine years as Statesboro High School’s Percussion Ensemble and Drumline instructor and two years as the school’s assistant band director.

“Madison Smith is a tremendous person overall,” Gleissner said. “She will make the world a better place as she continues her education and goes into the world a leader in everything she does. I believe she chose me as her star teacher because of the experiences we shared while she trained to be our band captain and the many years of life lessons learned through the prism of music. I am incredibly honored and proud to be a part of Madison’s journey towards excellence and her recognition only deepens my commitment to ensuring all of my students have the same opportunities that produced such a wonderful and talented person as Madison.”

Hannah Parsons – STAR Student: Hannah Parsons is the daughter of Brandie and Eric Farmborough and Michael Parsons. She plans to attend the University of South Florida, major in Biology, attend medical school and earn a doctorate in Genetics, and pursue a career as a medical geneticist.

“I chose Mr. Olsen as my STAR teacher because he has made the biggest impact on my life,” Parsons said. “His mentoring and care have given me life lessons and hope that I could not have gained from anyone else.”

Matt Olsen – STAR Teacher: Matt Olsen is the director of bands for Southeast Bulloch High School, where he has spent his entire teaching career and is a former teacher of the year for the school.

“It has been an absolute pleasure to watch Hannah overcome so much and grow into the awesome young lady she has become,” said Olsen. “Over the last four years I have seen her highs and lows, and it brings a much-needed smile to my face to see that she has not just overcome her trials, but excelled at all of her pursuits whether they be academic, musical, or personal. I couldn’t be prouder to be selected as her STAR teacher.”

David Lippincott – STAR Student: David Lippincott is the son of Dr. & Mrs. Lincoln Lippincott (Elizabeth). The salutatorian of his graduating class, David plans to major in mathematics at the Georgia Institute of Technology. He selected Estella Newkirt as his STAR teacher. She taught him when he was a fourth-grade student at Julia P. Bryant Elementary School, and she was his math team coach in third, fourth, and fifth-grades. He credits Ms. Newkirt with instilling in him a love for learning and for influencing his passion for mathematics.

Estella Newkirt – STAR Teacher:     Estella Newkirt is a 21-year veteran educator who currently serves as a fourth-grade teacher at S.G.A. Elementary School in Burke County, but previously served Bulloch County Schools at Julia P. Bryant Elementary and Mattie Lively Elementary. She has a gift for engaging young students and is credited with starting the Reggie Dawson Memorial Math Tournament in 2011, for Bulloch County’s third and fourth-grade students.

Kathryn (Kate) Lattner – STAR Student:  Kate Lattner is the daughter of David and Lori Lattner. She plans to attend the University of Georgia, major in Communication Science and Disorders, and become a certified speech therapist. She chose Donna McKenna as her STAR teacher.

“She is the smartest woman I know,” Lattner said. “During her time at Trinity, she has taught me geometry, honors chemistry, Advanced Placement (AP) chemistry, AP calculus, and AP physics. The classes she teaches give some insight into how talented she is, but there is so much more than that. Mrs. Mckenna is truly a Renaissance woman: she’s written cookbooks, hiked sections of the Appalachian Trail, owns a farm, and is capable of anything she puts her mind to. I am so grateful that I’ve had the opportunity to be her student and would be honored to become even half of the woman she is.”

Donna McKenna – STAR Teacher:  Donna McKenna teachers Advanced Placement (AP) Calculus and AP Physics at Trinity Christian School. This is the fifth time that she has been named a STAR teacher.
“I have known Kate and her family since she was born,” McKenna said.  “Being a high school teacher I have just gotten to know her as a student in the last few years. She is a diligent student and takes the most challenging classes our school has to offer. She also likes math and math related science, so since I share that trait and teach the AP math and sciences, we have a bond. I love teaching her these subjects and she excelled in them which is why I believe she chose me as her Star teacher.”