William Kroymann was arrested Wednesday for Aggravated Battery in reference to an incident that occurred early last Friday morning, January 13. Statesboro Police Department officers and Bulloch EMS responded to Sigma Nu Fraternity on Olympic Blvd for an unconscious male. Witnesses told police that the victim had been struck by another male, causing him to fall and hit his head on the sidewalk. The victim was transported to EGRMC and later transferred to Memorial in Savannah, where it was discovered that he had a fractured skull and bleeding on the brain. He has since been released and is recovering at home.

Through investigation, detectives were able to determine that the victim was walking past the fraternity house when several individuals at the house engaged him verbally, then went toward him before Kroymann assaulted him.

This case is still under investigation and SPD detectives are seeking additional witnesses to provide further information. Anyone with information on this case is asked to contact Captain Jared Akins at 912-764-9911 or anonymously via tips@statesboroga.gov. 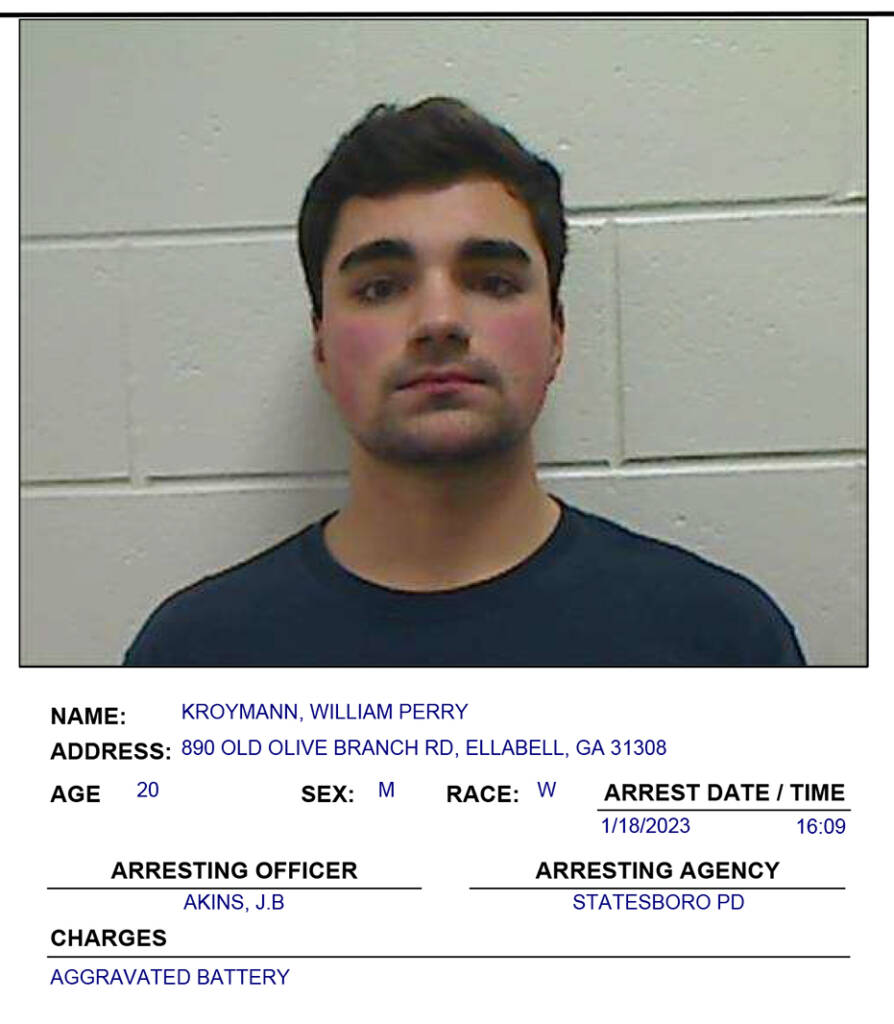 On 1/13/23 (early Friday morning) at 1:15 a.m. SPD Patrol officers and Bulloch County EMS responded to Olympic Blvd. for a male unconscious at that location. Witnesses indicated that the victim had been struck by another male, causing him to fall and strike his head on the sidewalk. The victim was transported to East Georgia Regional Medical Center and later transferred to Memorial in Savannah. His injuries were found to be more serious than originally thought, with a fracture to his skull and bleeding on the brain. As a result of Memorial’s excellent care, the victim has been released and returned home to recover.

Detectives, using witness testimony, social media/cellphone records, and video surveillance, were able to determine that the victim had been walking past the Sigma Nu Fraternity located at 103 Olympic Blvd. Several individuals from in front of the fraternity house engaged the victim verbally as he was passing the house and then advanced toward the victim on the sidewalk. The victim was then assaulted by one of the individuals, later identified as William Kroymann (20, Olympic Blvd, Statesboro). Kroymann was arrested by detectives on 1/18/23 and transported to the Bulloch County Jail on one count of Aggravated Battery.

Based on surveillance video, detectives believe that there were multiple independent witnesses to the event that have not yet spoken to law enforcement. These witnesses can contribute important information to the case, and detectives wish to speak with them. The events would have been early last Friday (the 13th) between 1:00 a.m. and 1:30 a.m. on Olympic Blvd. adjacent to the Sigma Nu Fraternity House. Anyone with information on this case should contact Captain Jared Akins at 912 764-9911 or anonymously via tips@statesboroga.gov.