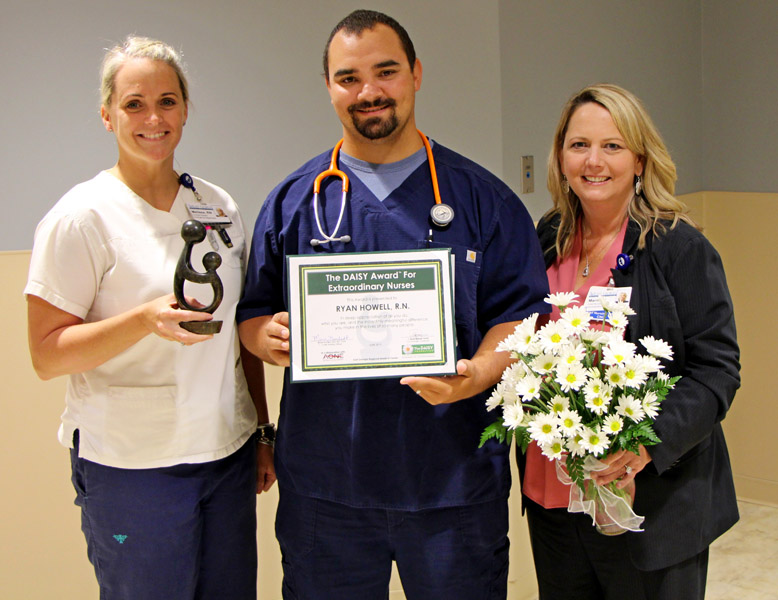 Howell’s nomination was touching, as one of his colleagues described how extraordinary he is. Here is an excerpt from his nomination:

“Ryan cared for a patient recently who had inconsistent injuries. He reported these injuries to Adult Protective Services and an investigation ensued. The allegations were found to be true. Ryan’s follow-through with this patient and recognition that the injuries were inconsistent helped address an unsafe situation.”

Nominations were reviewed by a committee of nurses at EGRMC. Howell was selected in recognition of the heroic, personal difference he makes in the lives of patients and his peers.

The award is part of the DAISY Foundation’s program to recognize the super-human efforts nurses perform every day. The DAISY Awards are given throughout the year at presentations given in front of the nurse’s colleagues, physicians, patients, and visitors.

“The DAISY Award program allows us to recognize our extraordinary nurses for going above and beyond,” said Stephen Pennington, interim Chief Executive Officer at East Georgia Regional. “Ryan is a talented and dedicated nurse who has provided excellent care to our patients, and we are lucky to have him on our team.”

The not-for-profit DAISY Foundation is based in Glen Ellen, CA, and was established by family members in memory of J. Patrick Barnes. Patrick died at the age of 33 in late 1999 from complications of Idiopathic Thrombocytopenic Purpura (ITP), a little known but not uncommon auto-immune disease. The care Patrick and his family received from nurses while he was ill inspired this unique means of thanking nurses for making a profound difference in the lives of their patients and patient families.

“When Patrick was critically ill, our family experienced first-hand the remarkable skill and care nurses provide patients every day and night, said Bonnie Barnes, FAAN, President and Co-Founder of The DAISY Foundation. “Yet these unsung heroes are seldom recognized for the super-human work they do. The kind of work the nurses at EGRMC are called on to do every day epitomizes the purpose of The DAISY Award.”

Each DAISY Award Honoree will receive a certificate commending her or him for being an Extraordinary Nurse. The certificate reads: “In deep appreciation of all you do, who you are, and the incredibly meaningful difference you make in the lives of so many people.” The Honoree will also be given a beautiful and meaningful sculpture called A Healer’s Touch, hand-carved by artists of the Shona Tribe in Africa. 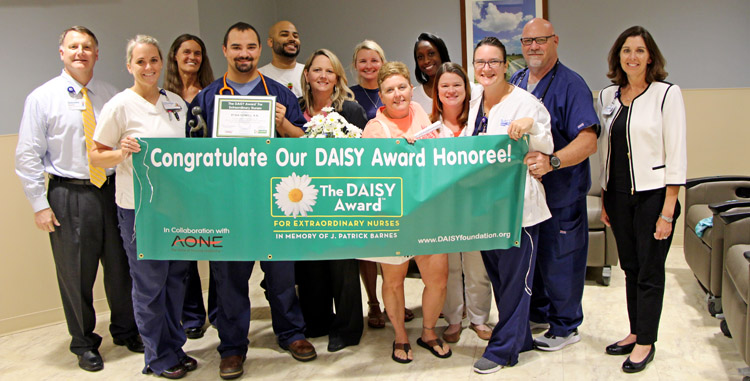