McKeever-Harrison will be on the field during halftime attempting to toss as many footballs as she can into an oversized Dr Pepper can within 30 seconds in hopes of winning $100,000 in tuition money as part of the Dr Pepper Tuition Giveaway. 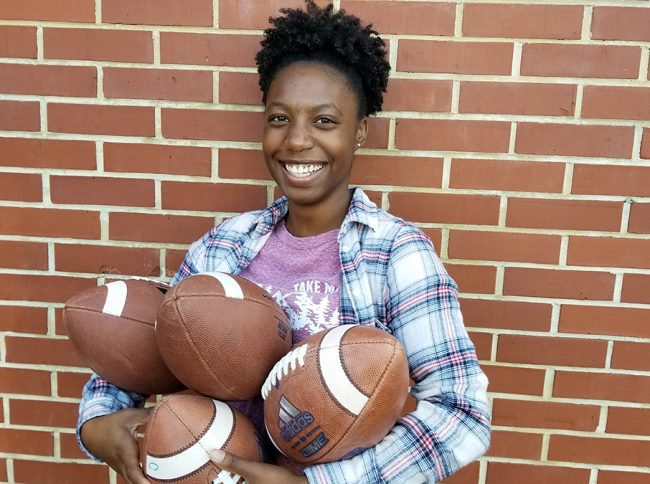 McKeever-Harrison will be on the field during halftime attempting to toss as many footballs as she can into an oversized Dr Pepper can within 30 seconds in hopes of winning $100,000 in tuition money as part of the Dr Pepper Tuition Giveaway.

“I’m pretty excited, I feel pretty prepared and I’m honestly just ready to go and enjoy the weekend,” she said.

Winning the tuition money would help with expenses for graduate school as she pursues her goal of becoming a pediatric occupational therapist.

“I’m not entirely sure where I want to go for graduate school just yet, but I’d love to find a school where I feel like I am at home, kind of like how I have felt at Georgia Southern,” she said.

McKeever-Harrison has been practicing for the contest each day for nearly an hour since mid-November. Throughout her preparation process, McKeever-Harrison was inspired by how the Georgia Southern campus community rallied around her on this journey.

“Everybody has been very supportive and helpful in any way possible,” she said. “Even if it’s just encouraging words or letting me know they’ll be watching. I’m just so thankful.”

McKeever-Harrison is part of the Southern Leaders Program, which engages students in an interactive leadership program throughout their college career. She found help and support from her peers and mentors in the Office of Leadership and Community Engagement.

“John Egan found a hula hoop about the same size as the hole I would be throwing the footballs in, and we went outside and he held it up and let me throw,” she said. “It was a little scary because I was worried about hitting him, but he wasn’t worried about that at all.”

Then, a personal friend created a replica of the oversized can she’ll toss footballs into during the competition. After reaching out to her professors, McKeever-Harrison secured a space at Hanner Fieldhouse to store the replica and practice as often she wanted. Georgia Southern Athletics helped her secure footballs to practice with, and she has even perfected her tossing strategy with help from Georgia Southern football legend Adrian Peterson.

“It’s been pretty great and I’m just so thankful for his help and that he takes the time out of his day to come and practice with me for an hour or so,” she said of Peterson. “We both celebrate large and small accomplishments. It’s been really nice to have his support.”

The Office of Public Safety put up cones around the practice replica so that no one moves it, and her professors adjusted her end-of-semester testing and presentations to accommodate her travel.

“It is so nice to have all these people rooting for me, but also helping me with either resources, time and advice,” she said. “I’ve definitely got the whole community of Georgia Southern helping out.”

McKeever-Harrison is one of 20 contestants who will participate in the 11th annual Dr Pepper Tuition Giveaway during this weekend’s College Football Conference Championship weekend. The winning contestant receives $100,000 in tuition money, and the runner-up receives $25,000 in tuition. In total, Dr Pepper will award $1 million in tuition through this year’s program.

“Dr Pepper and college football go hand-in-hand, and the Dr Pepper Tuition Giveaway not only demonstrates our commitment to the sport, but it is also our way of giving back to the fans by enabling them to make their academic goals a reality,” said Derek Dabrowski, vice president of brand marketing for Dr Pepper. “This is an incredible group of finalists, all of whom have big plans to make a difference with the money they are trying to win. We are proud to be a part of their journey, and we can’t wait to see them take the field this weekend.”

The finalists, who range from 18 to24 years old and hail from across the country, were selected based on video submissions to Dr Pepper explaining how the tuition money will help them make an impact in the world.