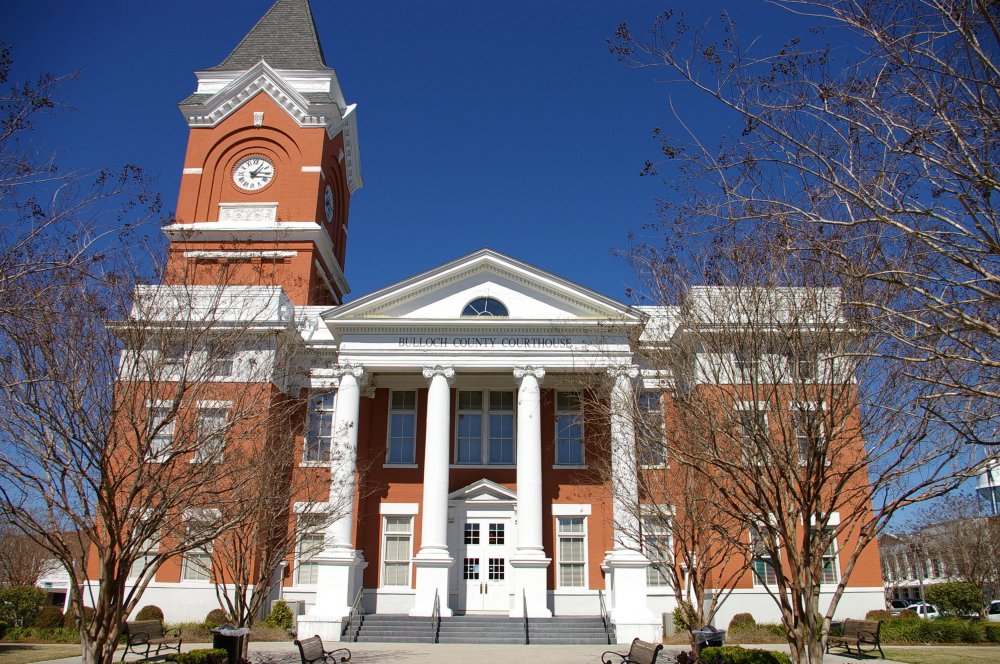 Bulloch County was created by way of the General Assembly in 1796 but did not have a courthouse because officials were debating over where the county seat should be located.

Various courts, like what we consider ‘Superior Court’ now, were hosted in people’s homes.

It wasn’t until 1803 that Statesboro was designated as the county seat, which permitted a wooden courthouse be built. It was replaced in 1807 by a bigger courthouse, but one that was still made of wood. It burned during Sherman’s March to the Sea in 1864.

In 1866, county officials levyed a tax to rebuild the courthouse, a tax which had to be authorized by the Georgia General Assembly first. The tax paid for a two-story wooden building which was the “interim” location until the courthouse which still stands today was built in 1894.

The courthouse has been renovated several times.

As part of a renovation in 1914, pedimented porticos supported by columns were added to the entrances to the courthouse. By the 1960s, the Bulloch County courthouse had undergone several renovations that had utilized brick of different colors. This may have been the reason why the county commission decided to have the entire courthouse exterior coated with a white plaster that contained asbestos. In the 1990s, the county commission decided to undertake a major restoration of the courthouse. To remove the white plaster, it would have been necessary to sand blast the courthouse exterior.

However, because of the damage this would do to the brick’s surface, the Historic Preservation Division of the Georgia Department of Natural Resources encouraged Bulloch County officials to leave the plaster coating in place. The architect in charge of the courthouse restoration then recommended painting the white coating with a red color to simulate the appearance of brick.

That restoration was completed in 2000.