Statesboro PD’s Sgt. Eric Simms is our first feature in the First Responder Spotlight Series – brought to you by McKeithen’s True Value Hardware in Statesboro. 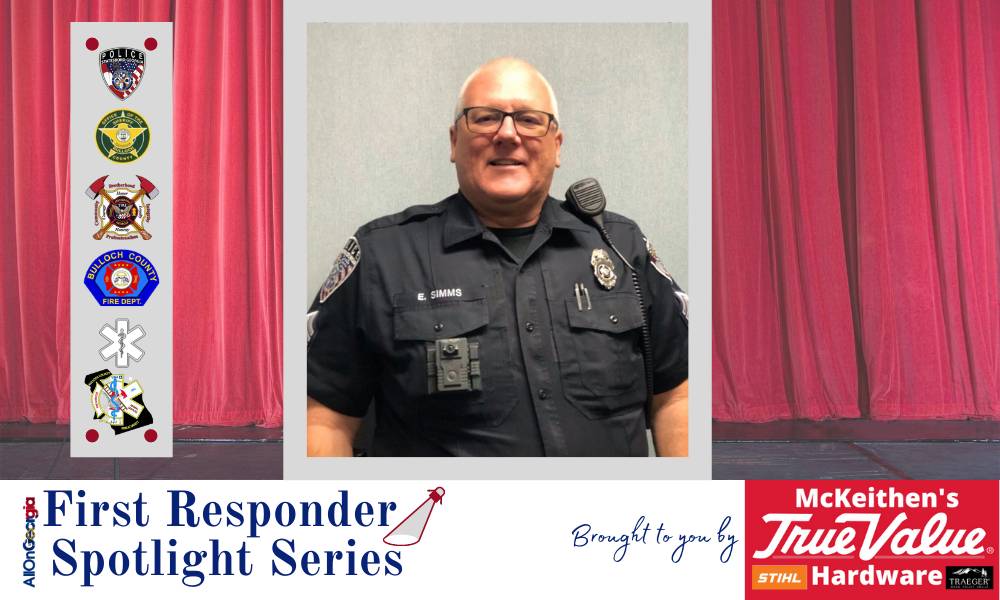 The AllOnGeorgia First Responder Spotlight Series features law enforcement, firefighters, EMS, and other emergency personnel who make it their business to serve our communities, often in ways we never see, each and every day.
The series is sponsored by McKeithen’s True Value Hardware in Statesboro.

On any given day, you can find Sgt. Eric Simms of the Statesboro Police Department working the day shift inside the city limits of Statesboro.

He started his career in law enforcement a good bit later than most do, applying as a patrol officer at the age of 36. Having previously worked in other fields and even as a self-employed person, Simms was drawn in by the diversity of daily tasks and the ever-changing location of those tasks as someone who just wasn’t made to sit in an office all day. In 2001, Simms decided to dedicate his time and efforts to public service and has yet to look back.

He and his wife Cindy have been married for 32 years and are the parents to eight children and the grandparents to three, almost all of whom still live in Statesboro today. That’s a blessing in more ways than one, as he and his wife, as well as their youngest daughter, moved to Brunswick two years ago when his wife took a job at the hospital in Glynn County. Simms now spends half of his time in Bulloch County when he’s working and his off-days near the coast.

Simms has been with the Statesboro Police Department for 19 years, attaining the rank of Sergeant roughly seven years ago. He has worked as a Field Training Officer and a K9 handler – partnering with agencies from McIntosh County to Dublin, and even assisting the military at Hunter Army Airfield.

Though the job is always changing alongside the growing community, there is a certain amount of wisdom and patience that comes alongside the tenure of almost two decades in policing – an amount that is noticeable organically by his colleagues in the agency and one of the reasons he was nominated as the inaugural spotlight feature. It comes as no surprise that as a Sergeant in a supervisory role, Simms says the most important thing he can instill in those he oversees on his shift is ‘how to treat people.’

That’s one of the reasons his approach to supervising is to encourage those on his shift to work through the issues using their best judgment based on what they have learned. “Law enforcement isn’t a hard, fast answer. There are a number of ways to approach a situation and it’s their call, their case, their arrest. As long as they can give me a thoughtful reason on why they did something, we’re going to go with it even if it’s not what I would have done. And, of course, I tell them ‘if you mess up, just let me know and we will fix it together.’ But open communication is a very important part of that.”

Simms says his mentor in law enforcement is undoubtedly Kevin Waters who was a patrol officer, a detective, and ultimately a Sergeant over Simms before he went on to work for the GBI. “He knew his craft, he understood policing, and he studied it. When you needed to rely on him, he would know it, or know how to get it, or you would learn it together. So now I encourage all the officers on my shift to study policing. Knowledge is power. The more knowledge you have about something, the more comfortable you’re going to be and a knowledgeable officer is a confident officer.”

But by default, law enforcement isn’t all positive. When asked what amounted to the most difficult aspect of the job, Sgt. Simms said the frequent encounters with those suffering from mental illness is difficult because of the lack of available resources law enforcement can provide. There is so much outside of the control of the agency that it’s often difficult to get people the help they need and that’s hard to take in no matter how many times you’ve seen it before.

Still, Simms is able to articulate a number of positives that outweigh the hardships of the job. Throughout his interview, he lamented how many different people he’s had the privilege of meeting in the community and working with during his tenure in law enforcement. “You meet a lot of good people,” he said. ‘People you help one time, people you learn from, and people who end up being a part of your life forever.”

In a time when the opinions of law enforcement can fluctuate with the goings on and with headlines that capture the nation, Simms says Statesboro is somewhat shielded from that. “The vast majority of the public supports us,” he said in his interview. The support, he said, is a result of longstanding relationships built over decades. “But I think it’s also a testament to the training and the vetting that we do here with our officers.”

And 19 years later, he’s never worked anywhere but Statesboro – a community he loves and is proud to see his kids call home. Simms referenced the difficult period during which one of his son’s battled cancer. The community went above and beyond to support his family during the inexplicable hardship. “The community came together and did a fundraiser for us – and without them, we wouldn’t have made it. People gave what they had – money, time, brainpower, prayers.”

Those good faith efforts and charitable hearts weren’t just for Simms and his family and it isn’t a support system that stops with law enforcement, he said. “All the time, we see things that other people don’t. We have people who are meeting the needs of others on a daily basis around here. They don’t want their name on a billboard, but they’ll make it happen. The amount of work that goes on behind the scenes is staggering. It’s a lot more good than bad.”