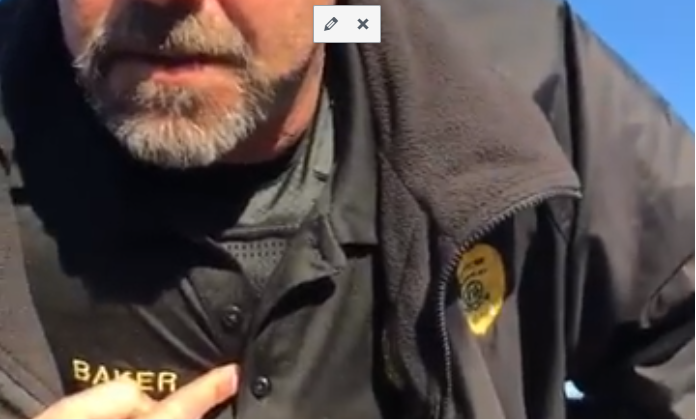 A Leefield woman is trying to get her story out after she had a run in with the Brooklet Police Department on Tuesday.

Lee told AllOnGeorgia she had been at the Clyde’s on Highway 80 where she picked up the minor children when an off-duty Brooklet Police Officer, Charles Dutton, approached the vehicle about the children not being restrained in the other vehicle. Lee said she agreed that the children should be restrained, but that it was not her vehicle in question. Lee said one of the children giggled and Dutton looked at him and said, “You think this sh*t is f*ing funny?” Lee left the gas station and proceeded to go home, with the children properly buckled in, when she was pulled over by the on-duty officer and an off-duty.

In the first encounter on video, Lee is speaking to two Brooklet PD officers, one of whom is wearing a badge but appears to be in plain clothes. Lee is heard asking the officers what the reason for being pulled over was and if she was free to go. At one point, the officer told her “you copped an attitude…”

Ultimately, the officer on video told Lee she needed to make sure other cars had car seats installed. She posted the encounter on Facebook Tuesday afternoon and the comments and shares erupted as the discussion spread through the community.

The Brooklet Law states you can not COP AN ATTITUDE with an off duty officer at a local gas station when he is being rude to you… bc he will call his buddy and have you pulled over and harassed. I have contacted an attorney if you have any complaints with the Brooklet PD and are interested in going to the city counsel meeting please send me a private message

Lee went to the Brooklet Police Department on Wednesday to speak with the chief, Doug Meyer, about her encounter, a conversation which she recorded on her phone with a witness present.

In the video, Meyer is heard telling the woman that he will speak to her in front of the video cameras because she posted a previous encounter on Facebook.

“We’re on video right now and I’m going to record anything that ever happens with you ever again because what you decide to put out on the streets,” Meyer told Lee. Lee then asked to speak with a councilman in the office, directing her question to the Clerk, noting that she no longer wished to interact with Chief Meyer. Meyer repeatedly referred to Lee as “lady” ultimately telling her she needed to leave or be charged with Criminal Trespass and go to jail.

Lee asked the clerk again for the contact information for the coucilman and Meyer instructed her to ‘step outside right now.’ “I’m telling you to leave the building now, you’re making a disturbance,” Meyer said raising his voice.

Ultimately, Lee exited the building as Meyer told her, “In the future, we will not have any mercy or toleration for y’alls constant breaking of the law and blaming it on the police department. Leave the building.”

As Lee was leaving the building, she said, “I have a meeting with the news. This is more I can just add to it,” to which Meyer responded “Knock your lights out, lady.”

That video was posted on social media as well and is posted below. Lee contacted Councilman William Griffith, who is over the Police Department, and he asked her to return to City Hall to complete the complaint form. Lee told Griffith she was afraid to return to city hall after Meyer told her she would be arrested for criminal trespass, so Griffith agreed to take the form to a local conveinence store for pickup.

Lee is in the process of obtaining legal representation.

Jeremy Spencer contributed to this report.