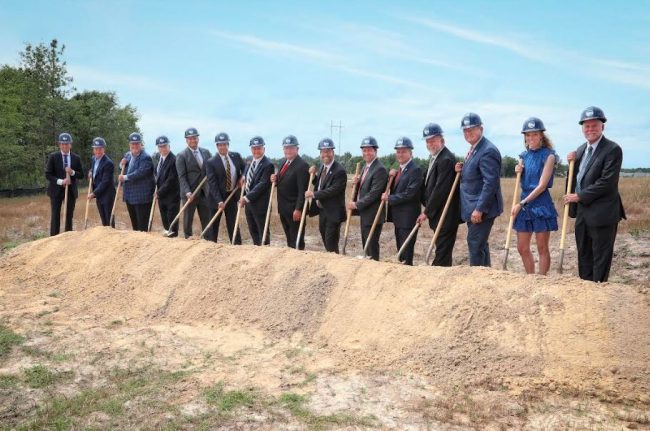 The opportunity to memorialize the late Sen. Jack Hill and wife Ruth Ann brought an impressive list of state and national leaders to Statesboro on Thursday to help break ground on a new Georgia Southern University Convocation Center that will bear their names.

New University System of Georgia (USG) Chancellor Sonny Perdue, state legislators, congressmen and Georgia Southern University President Kyle Marrero – all of whom had worked extensively with Hill over the last several decades – headlined a team of speakers who lauded Hill and his impact on Georgia while helping to kick off a project that will change the face of Statesboro.

“I’ve never known a more dedicated public servant than Jack Hill,” said Perdue, who shared an office with Hill and lived with him for a time while they both served in the Georgia Legislature.  “It’s an honor to be here today to remember my best political friend in the world.”

At 95,000 square feet, the Jack and Ruth Ann Hill Convocation Center will be the largest event venue space between Savannah and Macon and will serve as the signature building on Georgia Southern’s south campus, fronting Veterans Memorial Parkway (US 301 bypass).

With an estimated total cost of $64.4 million, the center will be a multi-story complex that provides approximately 7,000 square feet of additional instructional space for the Waters College of Health Professions and provides more than a 50% increase in seating capacity in an arena that will be the new home court for Georgia Southern Eagles NCAA basketball games.

The building is named for Jack Hill (‘66), who was the longest-serving Georgia senator when he died in April 2020. He was a senator for 30 years, serving as chairman of several crucial committees, including Appropriations, which has broad jurisdiction over legislation involving budgeting and spending state and federal funds. With Hill’s support, Georgia Southern reached new heights as an institution serving the southeast region and the state of Georgia. Hill was instrumental in helping the University expand its programs and build several new state-of-the-art facilities, including the Engineering and Research Building, which opened for classes in January 2021.

His wife of 48 years, Ruth Ann, focused her life on public education and retired as principal of Reidsville Elementary School. She was a triple Eagle, earning degrees from Georgia Southern in 1973, 1990 and 1991.

Lawmakers shared stories about their former colleague who loved service, his family, his state and his alma mater.

“His impact on this state, I believe, will never be rivaled,” Burns said. “His support of higher education and Georgia Southern propelled this university into national prominence.”

Others commented on how humble he was, and how much he would have disliked the ceremony in his honor.

“Today is a fitting tribute that Jack would have wanted no part of,” England said. “But I can’t think of a more fitting place to honor Jack and Ruth Ann than here on the campus of Georgia Southern.”

For academics, the Jack and Ruth Ann Hill Convocation Center will provide new space for a Waters College of Health Professions sports psychology lab, faculty offices, classrooms, new space for research and community activities, and access to a new strength and conditioning area for research and other programs.

“The Waters College specializes in preparing career-ready graduates through engaging teaching and learning opportunities, scholarly and creative research, and socially responsive service activities,” Joyner said. “From nursing to therapeutic sciences, to kinesiology, and to rehabilitation Sciences, the students in our programs need the hands-on experience that typifies a Georgia Southern education. In this new convocation center, our students will have increased opportunities to work with our student-athletes, coaches and trainers.”

For athletics, the center features a new basketball-only strength and conditioning area, fueling station, locker rooms, training room, team area and space for a new Hall of Fame for Eagle Athletics in the concourse. The arena will have chairback seats along both sidelines and behind one baseline, and allow future opportunities to add additional programming to the building, such as additional premium seating, suites and club areas.

“This is a great day for Georgia Southern basketball, it is also a great day for Georgia Southern University,” said Burg. “Thanks to the donors who are supporting this project. We really do have the best fans and supporters in the nation. If you combine this project with the Anthony P. Tippins Indoor Practice Facility, we have had almost $80 million in new facilities under construction to benefit all of the University’s student population, as well as provide a competitive advantage for our student-athletes. This is truly an unprecedented time for Eagle Athletics.”

Locating academic spaces under the same roof as the multi-purpose event venue allows for great synergy across disciplines, offering the University’s students hands-on learning opportunities while supporting student-athletes as well as members of the community through the institution’s own health and rehabilitation programs.

“The Jack and Ruth Ann Hill Convocation Center will further enhance and enable Georgia Southern to achieve our defined goal of student success,” Marrero said as he closed out the ceremony. “This stunning new addition to Georgia Southern University will be an iconic addition to Statesboro and signal a new era of growth for Eagle Nation.”