Moonpie may be small, but her impact is mighty 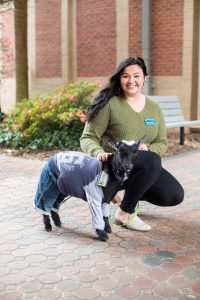 Moonpie may be small, but her impact is mighty. A Nigerian Dwarf goat, Moonpie was born premature and the runt of her litter. Her owner, Tonya Cooper, a special education instructor for the College of Education at Georgia Southern University, saw potential in her for a powerful new therapy venture.

“She’s very calm, unlike my other two goats,” said Cooper. “I started noticing as I would take her places how well she interacted with people and how calm she remained.”

The first place Cooper took Moonpie was the Tractor Supply in Statesboro.

“I have three goats because I was envisioning having people be able to visit my farm and play with the goats outside in their environment,” she said. “But as I realized Moonpie’s temperament was much calmer than the other two, I would take her places, and she behaved so well around shoppers. People really enjoyed seeing and spending time with her.”

Cooper began to do some research. Animal-assisted therapy has become a commonly practiced technique in the counseling and psychology realms, and one that especially interests Cooper as a teacher educator and special education clinical supervisor for the College of Education.

“Research indicated that goats offer a unique approach to animal-assisted therapy,” said Cooper. “Goats are curious and nosey. They don’t have to have a bond with you to socialize. Instead, they just walk up to you and demand attention.”

These traits prove useful for students with disabilities who struggle with socialization and communication. Goat therapy has been shown to lower anxiety, increase mental stimulation and improve mood and behavior of individuals during and after interaction.

“For students, especially those with disabilities, goat therapy offers them the opportunity to interact without rejection or judgment,” said Cooper. “It’s hard to explain, but when Moonpie goes into schools to visit with the special-needs students, she thrives. She pushes for interaction with those who are hesitant to interact with her, and once she gets to know them, she will crawl into their laps and just want to be held.”

Cooper explained that during one school visit, a student who is nonverbal was scared to interact with Moonpie at first and even ran from her. He continued to watch Moonpie from afar until he finally began to pet and interact with her. Cooper said before they left the school, the young man was walking Moonpie around on her leash showing her to the entire school. The student even allowed Moonpie to crawl into his lap, and he made noises to attempt to communicate with her.

“You just cannot fully understand until you see it for yourself,” said Cooper.

Along with outfits tailored to the occasion, Moonpie now wears her National Service Animal Registry identification. To become a certified therapy animal, Cooper had to complete 60 hours of training with Moonpie in various environments, proving that she was capable of coping with various settings that include loud and quiet areas, floor coverings, stairs and elevators. She also worked with small and large groups of people in a range of communities, from elementary school students to the elderly living in assisted living facilities.

“The hardest part of the training was actually getting people to allow us to come and get the hours completed,” said Cooper. “People are hesitant about the rules or whether a goat will be acceptable in their work and educational settings, but once they have seen Moonpie and interacted with her, we are immediately invited back for another visit.”

You can find Moonpie in the College of Education on the Statesboro and Armstrong Campuses at least two times per semester.

“It’s a great opportunity for our students to learn about the multitude of ways that you can make a difference for your students in the classroom and enhance their learning abilities,” said Cooper. “Especially when you are preparing teacher candidates to work with students who have special needs or exceptionalities, you have to consider opportunities that may be outside of the normal realm of thinking for teaching practices.

“Moonpie may definitely be outside of the norm for a classroom, but the impact she makes when working with students — especially students with disabilities — is a remarkable experience. She is a special little goat.”