There were no smoke detectors in the home, either. 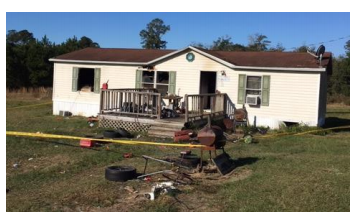 The cause of a fire that killed two Bulloch Countians has been determined to have started with a space heater.

Shortly after 1:00 A.M. on the morning of November 13, the City of Statesboro Fire Department responded to a residential fire located 648 Bell Road in Statesboro, Georgia. When emergency personnel made their way inside the home, they found Leslie Anne Dixon, 44, in critical condition and Anderson Spitler, 20, deceased on the floor of a bathroom near the master bedroom.

“Dixon was immediately transported to East Georgia Medical Center, but was pronounced deceased roughly an hour after the fire was reported,” said Safety Fire Commissioner John F. King. “The fire was caused by clothing being too close to a space heater in the master bedroom. No smoke detectors were found in the home.”

The 34-year-old, 1,056 square foot Fleetwood Mobile Home suffered major damage to the interior. Though there were two victims that perished in the fire, two individuals were able to escape the home unharmed. The deceased victims will not be sent to the GBI Crime Lab for autopsies due to the overwhelming evidence that their deaths were caused by smoke and soot inhalation.

“I cannot stress how important it is to practice extreme caution when using space heaters. Though these devices keep us warm and comfortable, they can be very dangerous if they are not used properly,” Commissioner King added. “In addition, it is absolutely essential that every Georgia family has a properly working smoke detector in their home. 91% of residential fire deaths this year were in homes without working smoke alarms. The stats cannot be more clear; these devices can be the difference between life and death in an emergency.”

In 2019, Georgia fires have claimed the lives of 77 individuals. 64 of these fatalities occurred across 53 residential fires, only five of which had working smoke alarms.