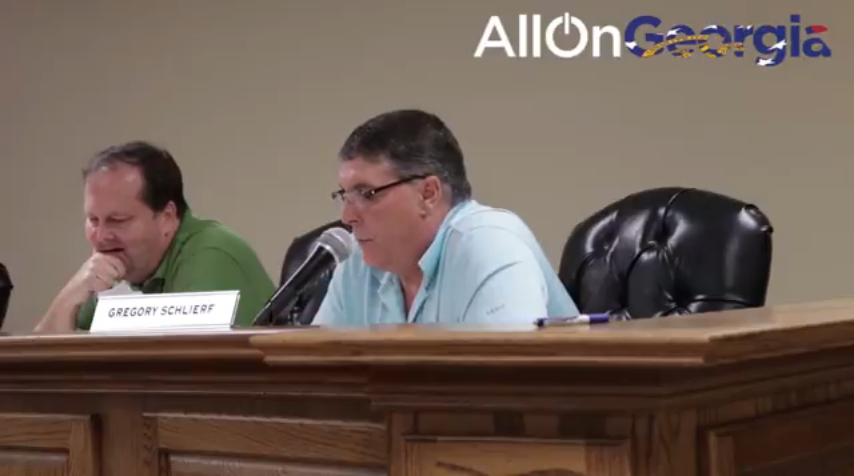 The Brooklet City Council made several motions for change with regard to the Brooklet Police Department on Thursday night after apologizing to citizens who filled the room for the council meeting.

Among the changes made by council were the decisions to change the resignation status of former interim chief Brian Mundy with the Peace Officer Standards and Training Council (POST), to challenge the findings of the external investigations done by the Effingham County Sheriff’s Office during the tenure of Mundy, and the council made the decision to appoint the City Administrator – who is currently Angela Wirth – as the official Open Records Officer for the city.

Councilman Greg Schlierf began the discussion about the PD and started with an apology to citizens.

“First and foremost, I want to apologize to all of you sitting here, I want to apologize to you, the citizens, for what has transpired with the City of Brooklet over the last month, month and a half. The videos that have been posted over time clearly show things are part of a very complex issue that we’re actually still dealing with. However, what the recent events have also shown is just how dysfunctional this group is that sits in front of you. Our lack of leadership, planning, vision, as well as other aspects of how we do our job, to be quite honest with you, is pretty crappy. You deserve better and I can speak for myself in saying that I intend to start being better for your right now.

Over the last several weeks, I have been making a lot of phone calls, talking to a lot of people,  and I don’t proclaim to have found the magic wand to address what is going on, I do want to address a couple of motions to at least attempt to get the ball rolling in the right direction.” (See below after ‘Apologies’ section)

“We are holding our police department to the highest of standards.”

Schlierf also said that he apologizes for missing meetings due to work and has instructed the city administrator to withhold his pay as councilman when he misses meetings.

Newman told members of the public and his fellow council members that he’s been out of pocket because of his chemotherapy treatments.

“I’m not saying that as an excuse, I’m just saying that to let you know that I have been out of pocket for several months. Yes we have problems, yes we are a growing town. This is what happens when you have five part-time people up here trying to do full-time work. In the past, I have put in many hours and more than I could, but lately I haven’t been able to, but as soon as I’m able to, I plan on getting things back wholehearted.”

“Greg, I agree with the comments you made earlier and I will do my best to live up to your standards. That’s all I got.”

“Ladies and Gentlemen, I would like to join in the apology for my part in the unprofessional way we represented you and I, too, will do what I can do to perform better in this position and better the city.”

Mayor William Hendrix did not make any comments on the police department.

When Brian Mundy became interim chief of the Brooklet PD, the position was part-time, as he also served as deputy with the Effingham County Sheriff’s Office. Due to the fact that all previous internal affairs investigations were conducted by now-retired Chief Doug Meyer, Mundy had the investigations, which all began with citizen complaints, done outside of the Brooklet Police Department by a third party. For at least two of the Internal Investigations, the task was completed by an investigator with the Effingham County Sheriff’s office. The investigator was different for both investigations, both of which have been completed at this time.

Schlierf told council members that he was told by people that the Meyer launched several GBI investigations into the PD and himself when he left, but no further information has been provided to the council on those matters. “So I would ask Councilman Griffith and Interim Chief Lee Craft to look into those and if there is any truth to that, please report to us what those were all about.”

There was no motion made or any approval by council, only Schlierf’s instruction.

CHANGE OF STATUS OF BRIAN MUNDY

Councilman Schlierf told council members, “Based on some information that I am aware of, our former interim chief Brian Mundy, his separation from the City of Brooklet was a resignation. I would like to make a motion to Council to change that resignation to ‘resignation – ineligible to be rehired. It is my understanding that Chief Mundy, without permission of the Mayor or Council, violated our personnel policy by talking to the press and as such, if we are holding other officers to the highest of standards, he should be held to that as well.”

Before there was any discussion, Councilman Bill Griffith seconded the motion and it passed unanimously 4-0, with Councilman Russell Davis not present for the meeting. Schlierf instructed Bill Griffith to “take the information and report to POST accordingly,” but a councilman cannot directly report to POST. Another law enforcement official will have to handle the change of the status. AllOnGeorgia has already contacted POST to inquire as to whether or not the change of Mundy’s status will be approved, as the final decision is at the discretion of POST.

“The motion that just passed is not in anyway retaliation against what he did talk to the press about because quite honestly I feel like it would have come out anyway, but again, if we’re going to require all of our staff to follow the personnel policy, it includes the Chief.”

The video of this segment is here:

“If I may, while I’m on a roll here,” Schlierf said, “I would like to make a motion that our city administrator, who is currently Angela Wirth, be appointed as our official point of contact for all Open Records Requests. That way the city has one place to go and any one else who is providing information under the guidelines under Open Records if it was not under the direction of Angela Wirth, they are in violation of our personnel policies.”

Councilman Randy Newman said he thought that was already the process, but Schlierf said it was not officially. Newman made a motion and it passed 4-0.

The decision to appoint a single officer instead of allowing each department to provide records to the public indicates that Mundy did not violate the personnel policy.

You can watch the meeting in its entirety below. The discussion on the police department begins at the 16:30 mark.