The City of Statesboro enacted an executive order Sunday afternoon to enact an order one step short of a ‘Shelter in Place’ Order for the Statesboro community after recommendations from a number of doctors from East Georgia Regional Medical Center. 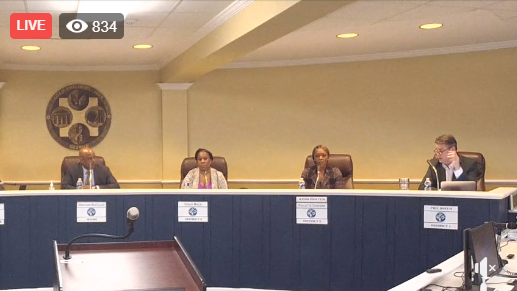 The City of Statesboro announced plans to enact an executive order Sunday afternoon one step short of a ‘Shelter in Place’ Order for the Statesboro community after recommendations from a number of doctors from East Georgia Regional Medical Center.

The mayor and council met for a special emergency called meeting Sunday afternoon for the purposes of hearing medical advice from a group of physicians.

Mayor Jonathan McCollar said, “The decisions made are based on fact, not opinion. Main purpose is to ensure the life of every individual within our community. We want to make sure everyone understands COVID-19 is a very serious matter. It is a very deadly matter. A very contagious decision.”

Two physicians joined the city on the telephone line to offer insight on the situation in Statesboro and the surrounding community, including recommendations with ‘economic consequences.’

Dr. Mark McCracken, a medical director of the hospitalist group at East Georgia Regional Medical Center, said “We do believe there is COVID-19 in our community and it’s just a matter of finding that and testing it. Testing is difficult to obtain.”

McCollar read a letter from the two physicians which said “we are woefully unprepared.” The letter said the measures to flatten the curve are ‘burdensome’ but necessary. “Please help us so we can help our community,” the doctor’s letter read. East Georgia Regional Medical Center in Statesboro has 24 critical care beds. There is already a shortage of masks.

Councilman Phil Boyum asked for how long and Mayor McCollar said for the duration of the emergency declaration, which is 30 days. Boyum said the 30 days was excessive on the front end and beyond the CDC’s current recommendation. He recommended 10 days and then a revisit.

McCollar said he “doesn’t want anyone to stand at a graveside and think we did not do enough.”

McCollar asked Dr. McCracken said he recommends 30 days, not 10, and council will see in two weeks that 30 days is necessary. “I don’t know what to say about the economic consequences. However, I think if the council is proactive, you will have the opportunity within 2 weeks to re-evaluate.”

McCollar said he will issue an executive order. Councilman Phil Boyum said, “So you’re not asking our approval, you’re just going to go ahead and do it?”

McCollar said the executive order will stand for 15 days – through April 7, 2020 – and then council and the mayor will re-evaluate, though the ordinance does not require council input. Beginning at 12am on Monday, March 23rd, it will be a misdemeanor to operate any business deemed non-essential.

Prohibited activities include gatherings of more than 10 people, whether they are indoor or outdoor, including churches, weddings, and restaurant events. Funerals are permitted outside only.

City Hall will also be closed to the public beginning Monday, March 23rd.

The emergency powers ordinance is one that was enacted last week under emergency circumstances in which the council suspended the rules to give the mayor the authority to take these actions.
You can read the letter from the medical professionals here.

This story is developing and this article will be updated shortly. Executive Order below: