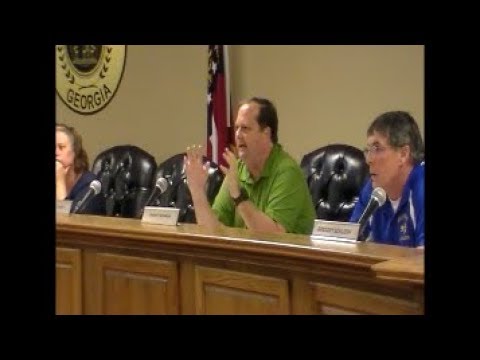 The following article is a response by city council to an 8-part (to date) investigative series by AllOnGeorgia into the Brooklet Police Department under the authority of Former Police Chief Doug Meyer (also known as Max Meyer & Clifford Meyer). The series looks into Internal Affairs investigation reports, a series of body camera files, and details over a dozen incidents during Meyer’s tenure in which citizens allege harassment, retaliation, and false imprisonment by Meyer and a few of his officers. All documents contained in the article below were obtained by way of an Open Records Request filed on May 29, 2018.

The following email was sent to AllOnGeorgia by a council member in Brooklet on Friday, June 8, 2018 after the publishing of Part 8 and after officials at City Hall said the city would make no comment. The email is published in its entirety and without edits.

First, thank you to All on Georgia for bringing to light the problems we had with the  former chief. It appears from your reporting that he was functioning  under the premise of an autonomous operation and was very selective in what was shared with his supervisors (City Council), only sharing the information he wanted us to know. I must admit am somewhat disappointed that our former interim chief chose to share, in such detail, this information with you as opposed to the Council that employed him, but I cannot control his actions and I also point out that he no longer is employed by the City of Brooklet as of June 1.

As a small town, the city council is made up of people who typically work full time outside of their city responsibilities and we must depend, to some level, on the city staff working independently. When you have good people, these arrangements work great, when you don’t they can be problematic, as you have so accurately pointed out.

Our decisions regarding the incidents surrounding Sgt. Baker and Former Chief Meyer were made based on the best information we had at the time. So based on the information we had at the time we made the decisions that were made. The unfortunate aspect of this is that the choices we had and the options we were able to choose from were not going to be easy, no matter what choice we made.

During the decision process we had no cause to think the situation was as extensive as has been revealed  because we had not been given information on citizen complaints or concerns. This was largely due to the autonomous nature that the former chief had operated the department. We are unfortunately learning the abuse of roles and unethical actions well after the fact.

From  my perspective, had I any reason to believe the situation was to the level of what you have reported, my questions regarding, and  decisions on the matter would have been very different.

I do have  one thing remaining of concern about the reporting on this story, it is ‘what is your goal?’  If it is generate hits and visits to your site, you have succeeded.  But if your reporting was to expose a problem in the Brooklet Police Department, all that has been accomplished is to reiterate and continue to explore the depth of what has already occurred. No new information on these individuals was really revealed.

What is being lost in the reporting is that the council has dealt with the staff and has made changes to the policies for filing complaints. Given the significance of the situation  and the outcomes , even if only taking in consideration what we knew at the time we were make decisions,  decisions were made  and we could not have been able to please everyone regardless of what we did, including members of council.

In addition, one of the last pieces I read was related to a discussion supposedly held in executive session about a computer.  I was not at the meeting, but knowing the council the way I do, that topic was most likely brought up as  ‘I forgot about this in my report, can we talk about it quick before we leave’ as they were walking back into the chamber. Our attorney, Hugh Hunter, is very firm in his stance on the purpose of executive sessions and does not permit discussion outside of the scope and purpose of executive sessions, so I believe it is highly unlikely that there was any substantive discussion related to a computer in that session. The inclusion of this topic seems to be speculative and is just ‘piling on’ and is not really relevant to the Police issues that you have covered in the previous 5 or 6 articles.

Finally, unlike what you may have experienced in other cities, All on Georgia, or any other media outlet, organization or person is welcome to attend our City Council meetings and to get information related to our city.  We need this external participation to ensure the checks and balances exist for  the success  of the governance of a local community.

Instead of being ‘stoned on the town square’ by the media and the public, going forward I would hope that the media and public first recognize that we are trying to do right for the city, accept we are going to make mistakes, and at times be forced into making unpopular decisions.  If there are people out there who think they can help, or do better, we want them involved. In my 5 years of council, there has not been 1 person interested serving on council and our average attendance at the meetings (ALWAYS THE THIRD THURSDAY OF THE MONTH) is approximately 10.

Unfortunately this is a good reflection on today’s society where it is easy to criticize and hide under the anonymity of the internet, but when it comes to stepping up and taking action, very few if any are willing to do anything constructive to make a difference. In addition, the negativity construed from social media and constant negative reporting introduces bias, real or perceived, that does not entice or encourage participation in local governance.

From my perspective every person on the current council has the best interest of the city in mind with everything we do. We live in this city, we represent this city and we want this city to be the best that we can make it. I will close with part of a conversation I had just today with  Interim Chief Lee Craft, ‘We are not what is out there now, we are better than that and we just have to show everyone again.’

I welcome a response, in writing, via phone, or in person.

Brooklet Says Official Documents are in Possession of Meyer, Not City
COLUMN: My “Goal” in Publishing the Chaos in Brooklet
Posting....