In his testimony, Congressman Allen highlighted the issues Augusta has experienced with the Corps of Engineers regarding the New Savannah Bluff Lock and Dam. 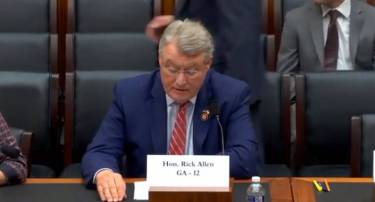 The Water Resources Development Act is a biennial piece of legislation that authorizes water projects throughout the nation. In his testimony, Congressman Allen highlighted the issues Augusta has experienced with the Corps of Engineers regarding the New Savannah Bluff Lock and Dam.

I want to thank the committee for allowing me to provide this testimony and highlight water issues that are critical to the 12th Congressional District of Georgia- namely the issues we have experienced with the Corps of Engineers regarding the New Savannah Bluff Lock and Dam.

Due to environmental mitigation from the Savannah Harbor Expansion Project, or SHEP, the Corps is responsible for constructing a mitigation feature that would allow sturgeon and other endangered fish to access their historic breeding grounds above the New Savannah Bluff Lock and Dam near Augusta, Georgia.

Dating back to the 1930s, the dam was originally authorized for navigation purposes, but after it was no longer used for commercial navigation, many users draw from the pool that the lock and dam has created.

In times of heavy rain, it has been used to mitigate any flooding in the area- like the rains we have been having over the past month or so.

The Corps recently selected a rock weir as an alternative to replace the lock and dam – a design that drops the pool level that our community needs.

I do not support this alternative and believe that the lowering of the pool does not meet the requirements of the WIIN Act, and is unacceptable.

I have heard from a range of local stakeholders throughout this process and they all have concerns with the Corps’ proposal, especially after a failed simulation in February of last year, where the Corps simulated the water levels that will occur should this High Fixed Weir with a Dry Floodplain be constructed.

The results were appalling, with boats and docks marooned and excess debris exposed throughout the river—and the Corps had to abandon the simulation due to instability in the riverbank.

Additionally, these simulated water levels were only a representation of average levels—not drought conditions.

That’s right—in drought conditions, the water level of the pool would go even lower!

Local community leaders have agreed that maintaining the water level of the pool above the lock and dam is critical so that our water users are not affected.

The Cities of Augusta and North Augusta, as well as Aiken County, have come together supporting resolutions that maintain the pool at or around its current level—approximately 114.5 feet.

I’d like to underscore that the Corps is not in compliance with the WIIN Act law by choosing this alternative that does not maintain the pool at the 114.5 level as it was in December of 2016.

Additionally, an Independent External Peer Review was conducted, which outlines many concerns and recommendations that I and other community members have highlighted throughout this process, including inconsistencies in cost analyses, lack of consideration of other alternatives that would not lower the pool, and lack of information on whether or not the leading alternatives would successfully pass fish overall.

In fact, the report indicated that the full river width rock weir may kill fish!

I met with NOAA in my office and they said that they have no proof that this alternative would actually work to pass sturgeon- and that they have not yet tagged a sturgeon using a similar rock weir at Cape Fear.

We should not waste millions of taxpayer dollars and remove the lock and dam structure on an alternative that we are not sure will work!

Throughout this process, the Corps has been challenging to work with at every turn.

The Corps was involved with the writing the WIIN Act language, without my knowledge, and has continually refused to give us a serious cost estimate for the cost to repair the lock and dam.

I urge the committee to work with me to include language that will repair and maintain the lock and dam and keep the pool level that our community needs, while still accommodating the modest fish passage required by SHEP.

The deepening expansion of the Savannah Harbor is critical for Georgia, and by working together, we can ensure that Augusta’s New Savannah Bluff Lock and Dam can be maintained while not delaying SHEP.

Thank you again to the committee for holding this member day and I look forward to continuing to work with you on this issue.