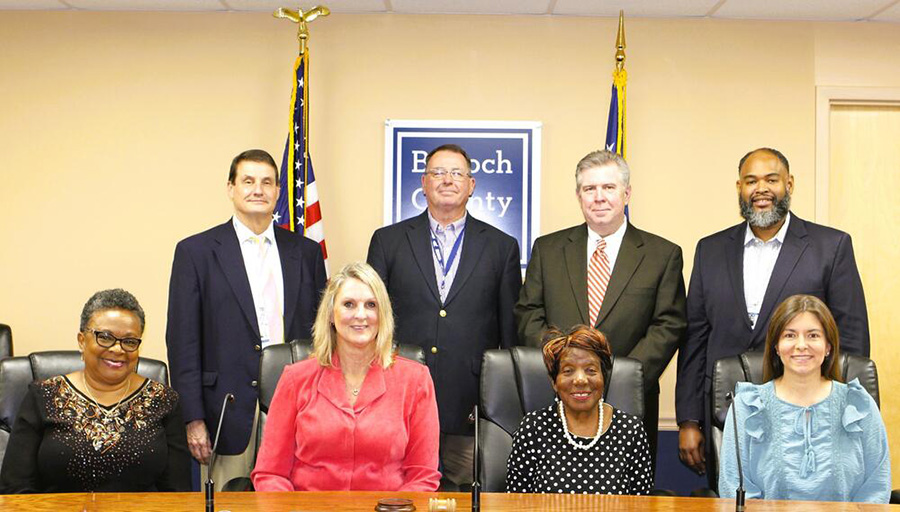 The Bulloch County Board of Education met for its annual organizational meeting on January 12, which included the swearing in of four new and re-elected members, election of officers, and approval of the 2023 meeting schedule.

Before the meeting convened, Bulloch County Probate Judge Lorna Deloach presided over the swearing-in ceremony for new Board members Elizabeth Williams of District 2 and Donna Clifton of District 4. Returning members Glennera Martin of District 5 and Jay Cook of District 6, who were re-elected in May, were also sworn in for their third terms of office.

Superintendent Charles Wilson presided over the meeting until the Board elected a chairman to serve for 2023. Donna Clifton nominated Glenn Womack. There being no additional nominations, the Board voted 7 to 0 in favor of Womack. District 8 Member Maurice Hill, who arrived 15 minutes into the session, was not present for the vote, but did arrive in time to vote for vice chairman. The Board unanimously elected Elizabeth Williams for this position after being nominated by Donna Clifton.

In the last order of business for the organizational portion of the agenda, the Board unanimously approved a schedule of regular and work sessions for 2023 as well as a date for its annual board governance training. All sessions will be held in the boardroom of the school district’s Central Office and begin at 6:30 p.m., unless otherwise announced. Meeting dates, times, and places are subject to change with advanced notice. Meetings are open to the public, and regular session meetings include a time for the public to sign up to speak.