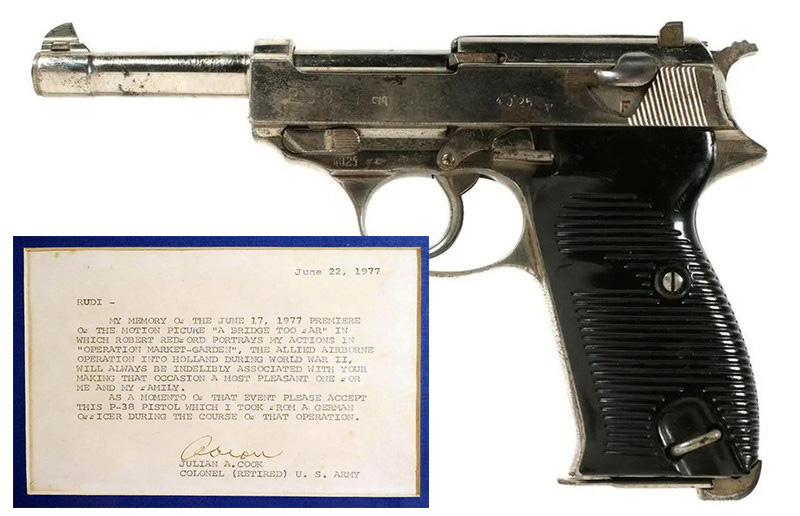 On December 11, Blackwell Auctions will offer a Walther P-38 pistol, taken from a German soldier by American paratrooper MAJ Julian Aaron Cook during the doomed 1944 Allied offensive, codenamed Operation Market Garden. Cook, who was portrayed by Robert Redford in the 1977 movie, A Bridge Too Far, was later awarded the Distinguished Service Cross for extraordinary heroism and knighted by Queen Wilhelmina of the Netherlands.

“It’s an honor to handle the sale of such a significant piece of military history,” said Edwin Bailey of Blackwell. “Major Cook’s crossing of the Waal River represented arguably the only fully successful aspect of Operation Market Garden.”

As with any item of historical importance, irrefutable provenance is key.

“Without provenance, this would be just another Walther P-38,” Bailey said. “But we could scarcely have more solid proof of authenticity.”

The consignor, who has been deeply involved with veterans affairs since the early 1970s, made certain that Cook and his family were given VIP treatment for the premiere of the movie, A Bridge Too Far. As a token of thanks, Cook gave him the Walther. Included with the pistol is a framed note from Cook to the consignor which reads, in part: “As a memento of that event [the movie premiere], please accept this P-38 pistol which I took from a German officer during the course of that operation.” Also included is a copy of the Bridge Too Far book, signed by Cook and inscribed to the consignor. And, finally, the auction lot includes a candid photograph of Cook presenting the pistol to the consignor, who’s holding the holster.

“It’s not often that we’re able to offer a piece this important with provenance this absolute,” Bailey stated. “I’m not sure it could possibly be improved upon.” 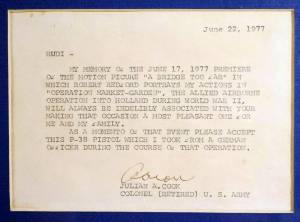 Outstanding provenance accompanies the piece, including a personal letter, signed by Cook, stating when and where the pistol was acquired. 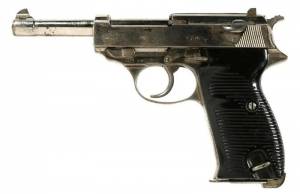 Important WWII pistol, captured by Bridge Too Far war hero, to be sold at Blackwell Auctions on December 11, 2021. MAJ Julian Aaron Cook, recipient of the Distinguished Service Cross for his actions during Operation Market Garden in 1944, took this Walther P-38 from a German officer during the course of the ill-fated invasion. Cook, portrayed by Robert Redford in the 1977 movie, was involved in one of the only successful actions of the entire operation.

For additional information, visit www.blackwellauctions.com or contact Edwin Bailey at 727-546-0200. Bidding is available online through LiveAuctioneers, Invaluable, Bidsquare, Proxibid and HiBid, as well as absentee and by phone.