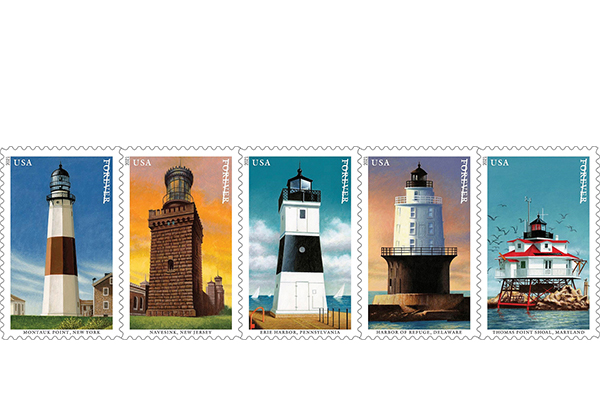 Stamps depicting the beauty, mystery and romance of lighthouses that have fascinated and enchanted people for centuries continue in 2021 with the issuance of Mid-Atlantic Lighthouses, the latest in the Postal Service’s continuing series of lighthouse stamps.

The Mid-Atlantic Lighthouses stamps are now being sold at Post Office locations nationwide and online at usps.com/lighthousestamp.

The stamp dedication took place at the Twin Lights State Historic Site in the Navesink Highlands of New Jersey — which is among the highest points along the Eastern Seaboard, guarding the entrance to New York Harbor.

“Lighthouses are some of the most popular topics among stamp collectors and customers alike, and it’s easy to see why,” said Linda Malone, the Postal Service’s vice president of engineering systems, who served as dedicating official for the ceremony. “Lighthouses send a dual message of welcome and warning, of connection and isolation. They have come to symbolize solitude, service, history and hope.”

Joining Malone for the ceremony were Paul Eric Johnson, photographer and author of the “Lighthouses of the Mid-Atlantic Coast” book; Peter McCracken, an expert in historical ships and a librarian at Cornell University; and Commissioner Shawn M. LaTourette, New Jersey Department of Environmental Protection.

“We are thrilled that the Twin Lights of the Navesink are featured on a Forever stamp, and that millions of people will be able to appreciate the beauty of a structure we are privileged to see every day in New Jersey,” LaTourette said. “This remarkable structure was considered one of America’s best and brightest lighthouses when it was completed in 1862, and still stands today as a beacon to important moments in U.S. history.”

One of only seven stations in the country to feature two towers, the twin lighthouses in the Navesink Highlands were built in 1828 and have seen many historic firsts. In 1841, Navesink’s identical towers were the first lighthouses in the U.S. to have Fresnel lenses installed: a first-order fixed lens in the north tower and a second-order revolving lens in the south tower.

Navesink was also the site chosen for the first public reading of the Pledge of Allegiance in 1893, and six years later, Guglielmo Marconi set up his telegraph at the light station and transmitted the first wireless telegraphic communication. The Navesink site was designated a National Historic Landmark in 2006.

In 1792, President George Washington authorized the construction of a lighthouse on Montauk Point, NY, at Long Island’s eastern end. After construction began in 1796, the lighthouse, built of Connecticut sandstone, was completed in only five months. With a foundation sunk 13 feet into the ground and a base with walls 7 feet thick, the building was so sturdy that Washington himself claimed it would stand for 200 years. He was right: The lighthouse still stands today.

Ownership of the Montauk lighthouse was transferred from the Coast Guard to the Montauk Historical Society in 1996. As the oldest lighthouse in New York and one of the oldest in continuous operation in the United States, Montauk Point Lighthouse became a National Historic Landmark in 2012.

Erie Harbor Pierhead in Pennsylvania — also called Presque Isle North Pierhead Lighthouse or Erie Harbor North Pier Lighthouse — has helped ships navigate the narrow inlet between Lake Erie and Presque Isle Bay for more than 150 years. Originally built in 1830 of wood, that tower was replaced in 1858. Since then, it has been moved twice to accommodate changes in the pier on which it rests. The 34-foot tower’s last move was in 1940 when it was automated and covered with steel plates.

The lighthouse has a distinctive white field and horizontal black band and features a shape that is one of a kind in the United States. Rather than a traditional pyramid silhouette, the Erie Harbor Pierhead Lighthouse tapers only halfway and then rises straight from its midsection to its top. Managed by the U.S. Coast Guard, the lighthouse remains an active navigational aid.

The National Harbor of Refuge Lighthouse in Delaware was created in the late 1800s to light the way for oceangoing vessels caught in violent Atlantic weather and has gone through a series of changes in its evolution. The breakwater was completed in 1901 with temporary lights added on either end in 1902. The lighthouse was built in 1908, replacing the 1902 tower. In 1925, the lighthouse was demolished and replaced by a new tower, completed in 1926.

The new tower, as shown on the stamp, stands on a cast-iron caisson supported by a heavy block of concrete that lies within the breakwater. The 76-foot-high conical lighthouse is built of cast-iron plates and lined with bricks. The tower, owned by the Delaware River and Bay Lighthouse Foundation since 2004, displays a flashing white light every five seconds. It is visible up to 19 miles away and is an active aid to navigation.

Located in the Chesapeake Bay south of Annapolis, MD, Thomas Point Shoal Lighthouse has withstood the elements since 1875. The hexagonal, one-and-a-half story, wood-frame cottage was built over a steel-frame deck mounted on a screw-pile foundation, which provides long iron rods with spirals at the ends that “screw” down many feet to anchor a foundation into soft, sandy soil.

Staffed until 1986, Thomas Point Shoal was the last lighthouse in the Chesapeake Bay to be automated. It is owned by the city of Annapolis but is maintained by the U.S. Coast Guard as an active aid to navigation.

The Mid-Atlantic Lighthouses are the seventh installment in the Postal Service’s long-running lighthouse series. Howard Koslow (1924-2016) was the artist for these stamps, as well as for previous issuances in the Lighthouses series. Each stamp features an original acrylic painting by Koslow, based on photographs of the lighthouses. Greg Breeding was the stamp designer and art director.