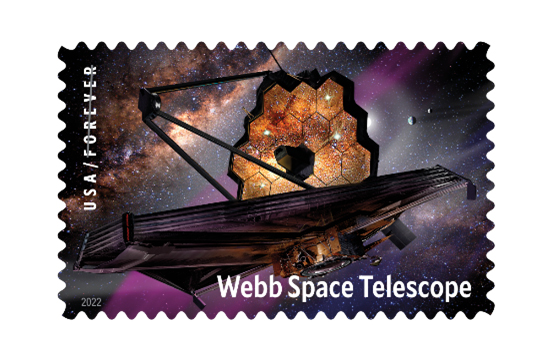 With the release of this vibrant stamp, the U.S. Postal Service celebrates NASA’s James Webb Space Telescope as it continues its epic mission to reveal the cosmos as never seen before. A dedication ceremony for the stamp was held today at the Smithsonian National Postal Museum.

“The James Webb Space Telescope orbits the sun about a million miles away from our planet. Now it will travel the United States mail system, with the launch of this new Forever stamp,” said Anton Hajjar, U.S. Postal Service Board of Governors vice chairman, who served as the dedicating official. “The Webb telescope is sending truly astounding images, I’m sure you will agree! The telescope itself, which we celebrate in this stamp, is an engineering marvel, decades in the making.”

“When anyone who uses these stamps looks at this telescope, I want them to see what I see — its incredible potential to reveal new and unexpected discoveries that help us understand the origins of the universe, and our place in it,” Cabana said. “This telescope is the largest international space science program in U.S. history, and I can’t wait to see the scientific breakthroughs it will enable in astronomy.”

News of the stamps is being shared on social media using the hashtag #WebbTelescopeStamp. Followers of the Postal Service’s Facebook page can view the stamp story at facebook.com/usps.

The pane of 20 stamps is being issued as Forever stamps, meaning they will always be equal in value to the current First-Class Mail 1-ounce price.

Launched on Dec. 25, 2021, NASA’s James Webb Space Telescope is the largest and most complex telescope ever deployed in space — capable of studying every phase of cosmic history. The telescope is designed to provide wondrous images and unprecedented scientific data. It is capable of peering into the limits of the known universe and can bear witness to the early cosmos. Discoveries enabled by the telescope stir existential awe as they expand our understanding of the heavens.

In addition to providing imagery and data about the far reaches of the cosmos, the telescope will also provide new information about our solar system and details about an increasing number of known exoplanets — planets orbiting other stars within our home galaxy, the Milky Way. Through spectroscopy — the analysis of wavelengths coming from these worlds — scientists can help identify planets with advantageous conditions for supporting life as we know it.

Released from the rocket, the telescope then unfolded as it traveled to a special position about a million miles from Earth. The sensitive telescope is protected from heat and light by a five-layer shield of high-tech materials, unfurled to about the size of a tennis court. So situated, the telescope operates in extreme cold, at temperatures below 50 kelvins (minus 370 degrees Fahrenheit). The extraordinary chill is vital, as the telescope must sense faint heat and light from celestial sources — some of them billions of light-years away. The telescope’s highly polished gold mirrors are ideally suited for this.

Before launch, members of the scientific community from all over the world developed plans and scientific targets for investigation by the telescope. Much of the telescope itself, including its beautiful gold mirrors, was assembled, polished, and tested in various facilities in the United States. The complex process had components shuttled among locations across the nation before shipment to the launch facility in South America. Instruments for science and guidance were contributed by U.S., Canadian, and European partners. NASA managed the overall development of the telescope.

Scientists have great expectations for Webb — including answers to some age-old questions and, without a doubt, a new array of cosmic mysteries.

The image on the stamp is an artist’s digitally created depiction of the telescope against a dazzling starscape. Its 18 gold-coated mirror segments — hexagons that combine to form its 21-foot-wide primary mirror—can pick up faint heat waves representing the universe’s first accessible starlight from billions of light-years away. Opposite, supported by three struts, is the secondary mirror. Below are the telescope’s solar shield, computers, control machinery, and the solar array that provides power.

The words “Webb Space Telescope” appear in white along the bottom edge of the stamp. “USA/FOREVER” runs vertically up the left-hand edge. In the selvage, at top, “James Webb Space Telescope” is printed in gold against the darkness of space, with an image of a star in a gap between the title’s last two words. Additional stars and galaxies appear in the background. This image was taken to confirm the perfect alignment of the telescope’s mirrors.

Art director Derry Noyes was the designer for the stamp project using existing art by James Vaughan and an image provided by NASA and the Space Telescope Science Institute.