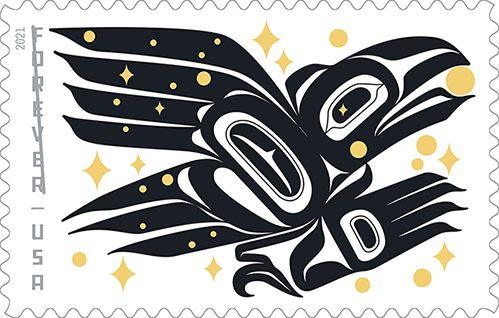 The U.S. Postal Service issued the Raven Story stamp today at the Sealaska Heritage Institute. The Forever stamps are now for sale at Post Offices nationwide. News of the stamp is being shared with the hashtags #RavenStoryStamp and #NativeAmericanRavenStory.

“The Raven Story represents a great meaning to the indigenous people of the Northwest Coast” said Jakki Krage Strako, the Postal Service’s chief commerce and business solutions officer and executive vice president, who served as the event’s dedicating official. “Today, the Postal Service is proud and honored to create this lasting tribute to the Raven Story through the issuance of this stamp.”

“Raven stories are a core aspect to Tlingit epistemology and I’m excited to share my representation of the Raven Story in a mixed modern and traditional way with this beautiful stamp” said Worl. “I hope this stamp inspires people to learn more about Alaska Native and Native American cultures as both rich traditional people and modern innovative and creative people.”

The stamp design depicts a raven just as he escapes from his human family and begins to transform back into his bird form. To create the stamp art, Worl used formline, the traditional design style of the Indigenous people of the northern Northwest Coast.

The stamp is inspired by the traditional story of the raven setting the sun, moon and stars free. It depicts one of many stories about the raven, a figure of great significance to the Indigenous people of the northern Northwest Coast, part of the area that ranges from Southeast Alaska through coastal British Columbia and south into Washington state.

Among the cultures of the region — which include the Tlingit, the Tsimshian, the Haida, the Kwakwaka’wakw and others — the raven plays an essential role in many traditional tales, including stories about the creation of the world. The different peoples of the northern Northwest Coast each have their own culturally specific versions of the raven story, which often convey customs, ethics and cultural inheritances that help communities preserve or affirm their identities.

The story behind the stamp will also be featured on the U.S. Postal Service Facebook and Twitter pages, posting at 4 p.m. EDT on July 30, 2021. A pictorial postmark of the designated first-day-of-issue city, Juneau, is available at usps.com/shopstamps.

The Raven Story stamp is being issued as a Forever stamp in panes of 20. These Forever stamps will always be equal in value to the current First-Class Mail 1‑ounce price.