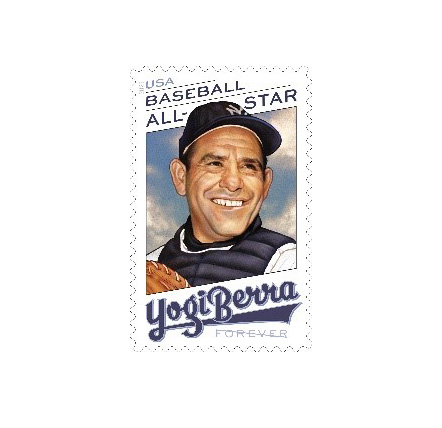 The U.S. Postal Service will honor Hall of Famer Yogi Berra with a commemorative Forever stamp. News of the stamp is being shared with hashtags #YogiBerraStamp and #BaseballStamps.
Who:
The Honorable Ron A. Bloom, Chairman, U.S. Postal Service Board of Governors

A pictorial postmark of the First Day of Issue location in Little Falls, NJ, is available at usps.com/stamps.

Background:
Beloved by fans across the country, Yogi Berra (1925-2015) was one of the best Major League Baseball players of his era. Berra won a record 10 World Series with the New York Yankees and was inducted into the National Baseball Hall of Fame.

During his career, Berra won three AL MVP awards and was an 18-time MLB All-Star. Considered the best catcher in the American League in the 1950s, he was also a feared hitter, averaging better than .300 four times — finishing with a .285 lifetime average — knocking in 100 runs five times and hitting 358 home runs.

Art director Antonio Alcalá designed the stamp with original art by Charles Chaisson. The artist first sketched the image with graphite and pastel oil pencils. He then scanned the image and finished the portrait digitally by applying layers of color to add highlights and detail. Michael Doret designed and created the lettering for “Yogi Berra” in blue script under the image of the player.

The Yogi Berra stamp is being issued as a Forever stamp in panes of 20. These Forever stamps will always be equal in value to the current First-Class Mail 1‑ounce price.

Customers may purchase stamps and other philatelic products through the Postal Store at usps.com/shopstamps, by calling 844-737-7826, by mail through USA Philatelic, or at Post Office locations nationwide.